Tensions continue between police and residents in Paris suburbs during lockdown 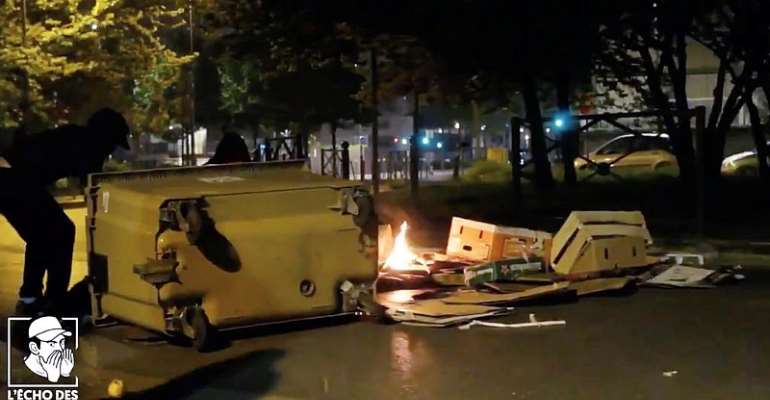 Police responded to sporadic unrest in five Paris suburbs Monday night, after a weekend of tension with residents who accuse officers of overstepping their authorities in the midst of France's strict coronavirus lockdown.

People burned cars, set fire to rubbish bins and shot fireworks at police in five cities bordering Paris to the north. Police claimed they were ambushed, and they responded with rubber bullets and tear gas.

The police prefecture said fireworks were shot in Villeneuve-La-Garenne, after first incidents started in Asnieres and Nantrerre, where cars and bins were burned.

The police prefecture said no one was injured, and nine people have been arrested, seven in Clichy-la-Garenne and two in Reuil-Malmaison.

This was the second night of unrest after an incident between a motorcyclist and police Saturday sparked outrage on social media.

Incident with police
On Saturday, a 30-year-old man fractured his leg when he crashed into the open door of an unmarked police car stopped at a red light in Villeneuve-La-Garenne.

A crowd gathered as police said the man resisted arrest and the group targeted officers with "projectiles" in a standoff that lasted nearly two hours.

Police say they opened the door to ask the motorcyclist, who was riding without a helmet, for his papers, and that they narrowly missed being run over.

The motorcyclist's lawyer says his client did not see anyone outside the car, and a complaint filed by the family claims the officers deliberately opened the door.

The motorcyclist, who underwent an operation on his leg, is currently under judicial control, according to prosecutors, for previous incidents including extortion and drug possession.

Rights group SOS Racisme called for a full investigation, and urged police to use restraint "in this time of confinement and tensions".

Earlier this month, prosecutors opened an investigation into the death in detention of a 33-year-old man arrested for allegedly violating the coronavirus confinement measures.