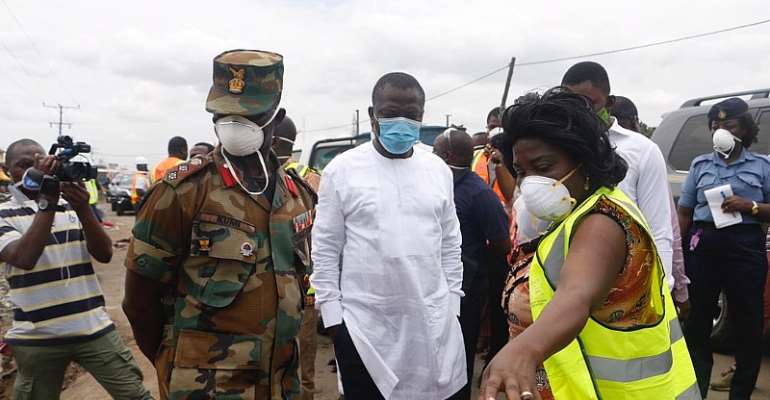 According to the minister, her ministry was satisfied with the deep clean-up exercise by the above institutions, adding that the central government was highly appreciative of their efforts.

Madam Dapaah made the commendation while on an inspection tour of some of the places that benefited from the exercise, immediately after the disinfection of markets, lorry parks, and other public places against the novel coronavirus (COVID-19) pandemic.

She was accompanied by some of her chief directors, the Executive Chairman of Jospong Group of Companies, Dr. Joseph Siaw-Agyapong, Mayor of Accra, Mohammed Adjei Sowah, and some senior security officers.

The inspection tour took the sanitation minister to the shoulders of the Tema motorway Agbogbloshie, Burma Camp and the Nima highway areas.

Though happy with the clean-up exercise, Madam Dapaah stressed the need for, especially residents in these areas, and the entire Greater Accra Region to ensure that their environs are always clean.

She was, however, not happy that some recalcitrant residents had already started littering these areas which were clean recently, a situation which compelled her to direct residents living along the Tema motorway to sweep and keep the place clean.

While on the motorway, she used the opportunity to educate the tollbooth workers on the need to make sure that the tickets they issue are not littered indiscriminately around the booths environ.

At the Agbogbloshie market where dredging works were on-going in the Odaw river, Madam Dapaah said that the government had secured a World Bank fund for the project.

She said the first phase of it was to ensure that all plastic materials were removed from the Odaw, which would then be followed by scooping and dredging of the river properly.

That, she indicated, will help clear all the debris in the river, and prevent flooding, particularly when the rains were about to set in. She indicated that the Chemu Lagoon was also a part of the dredging exercise including the drains on the Nima Highway.

For his part, the Mayor of Accra, Mohammed Adjei Sowah, gave the assurance that his outfit together with the local government ministry would enforce the sanitation bye-laws, warning that offenders would be dealt with according to the full width of the law.

According to him, plans were underway to fence off the lagoon to prevent refuse from being dumped into it.

He disclosed that open spaces would also be created within the market environs to help relocate some of the traders.

Furthermore, Mohammed Adjei Sowah revealed that during the partial lockdown, he donated food items and cash to about two hundred and eighty-four (284) residents within the Agbogbloshie area.

Shatta Wale to spend another night in police cell; to face c...
38 minutes ago