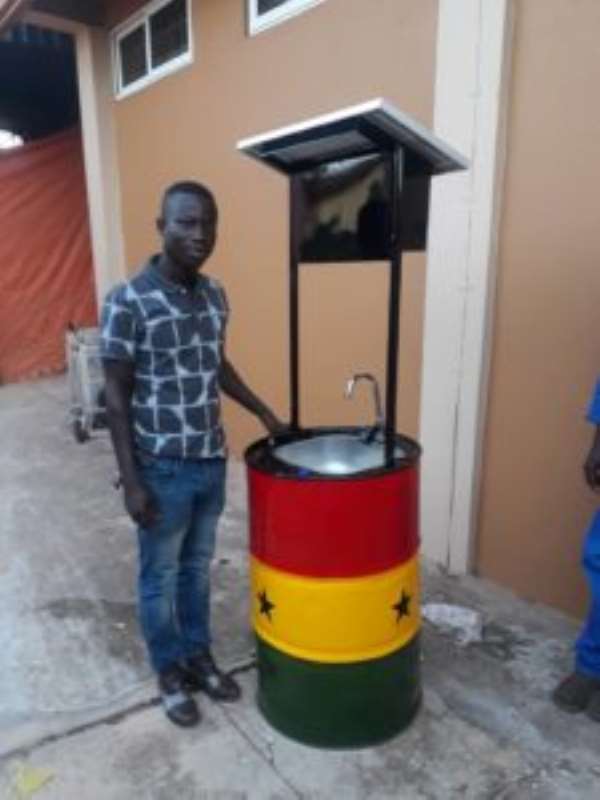 Christian Service University College (CSUC} is proud to congratulate, Mr. Richard Kwarteng, 2012 Alumnus (Marketing Option), for his timely invention of a solar-powered hand-washing device, as a control measure against the spread of the COVID-19 pandemic.

According to Mr. Kwarteng, the device does not require people to physically touch the tap as the device has an inbuilt remote sensor that automatically detects an outstretched hand for washing.

“The purpose is to aid the frequent and effective washing of hands without having to physically turn the tap or touch soap containers to avoid infections”, he said. Once a hand gets under the tap, the sensor detects it, setting off an alarm which sounds for 25 seconds during which an inbuilt liquid soap pours on the individual's hand for thorough rubbing. Immediately after the 25 seconds, the flow of water is triggered through the same tap to wash the hands.

Mr. Kwarteng further revealed that the barrel which constitutes the base of the device contains 80 litres of water that can wash up to 150 people's hands before it is refilled. Meanwhile, when the water and liquid soap are exhausted, the sensor detects it and

alerts for refilling.
Special Features and Benefits of the Device
He disclosed the following as unique features of the device:

It is powered by solar energy and has a remote sensor that detects one's hand without having to touch the tap.

The device is already filled with both water and liquid soap that facilitate the process of easy and effective hand washing.

The sensor operates with an alarm to guide users with the time and process of hand washing.

Water and soap are not wasted since the quantity per user are measured and released by the device.

The device allows adequate hand rubbing with liquid soap for 25 seconds before it releases water for washing.

The device is made from recycled barrels generated by oil companies to avoid environmental pollution.

Motivation for the invention
Mr. Kwarteng explained that he owns a shoe manufacturing company, AnningBlaq, which has operated for six years until President Akufo-Addo

declared the partial lockdown for parts of the country to combat the spread of COVID-19, leading to the closure of the business. “As a

businessman, I couldn't stay out of business till further notice, hence the inspiration to invent this advanced device, taking inspiration from the resurgent use of Veronica Buckets”, he noted.

He further emphasised that his training in BSc. Marketing at CSUC, coupled with some Basic Science studied at his Second Cycle level motivated him. Athough the advent of the COVID-19 pandemic played a critical role in the timely innovation, his love to explore new

things that foster the ultimate good of people was a complementary motivation for the invention.

Students who pioneered the establishment of the CSUC SRC Business Center.

He recommended that students should be encouraged to seize every opportunity in their fields of study to build their careers even while they are in school. By so doing, the country will get more entrepreneurs to grow its economy and further lessen the burden of government in providing jobs for graduates.

He also underscored the importance for potential entrepreneurs to follow their passion and do what they are good at, rather than to follow the crowd into any business venture because of the perception of making money. As he put it, “I saw the opportunity in the wake of the COVID-19 to do something meaningful that could have a global impact.”

Special Appeal
Mr. Kwarteng is appealing for support from the government, corporate bodies and individuals to facilitate large scale production and marketing of the device, following the need to scale up production in the wake of the current worldwide attention for the patronage of his product.

He also wishes to increase employment to help reduce the unemployment rate in the country.