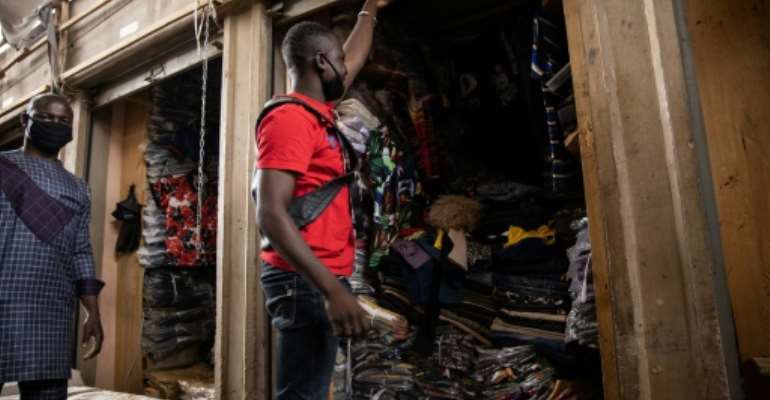 Ouagadougou's main market has reopened for business after being shut for nearly a month. By OLYMPIA DE MAISMONT (AFP)

It was back to business at the sprawling central market of Ouagadougou, capital of Burkina Faso, on Monday after a closure of nearly a month in the face of the coronavirus pandemic.

"It's a joy to see the market reopen its doors," said fabric dealer Boureima Compaore. "The situation was getting difficult for us."

As of Sunday, the poor West African country had reported 36 deaths from among 576 cases of COVID-19.

Around 40 other markets were closed in the city of three million on March 25, two weeks after the first appearance of the virus in the country.

The bustling market operates every day from dawn to dusk. By OLYMPIA DE MAISMONT (AFP)

"It's been a real hardship since the closure," said Souleymane Sawadogo, a clothing vendor. "Now we're relieved. We also hope customers won't be afraid to come and buy." He vowed that merchants would adhere strictly to "the most rigorous measures to keep the market open".

The bustling market offering produce, meats and spices, as well as all manner of textiles, hardware, appliances, computer accessories, motorcycle spare parts and even artworks, operates every day from dawn to dusk.

"The main market is the capital's economic lung," said Salifou Kabore, the president of the National Council of the Informal Sector, noting that it supplies many of the country's other markets.

The pandemic has hit an economy already challenged by a five-year-old battle against jihadist groups. The government is now targeting growth of 2.0 percent compared with an earlier projection of 6.3 percent.

The country's borders are closed and big cities including Ouagadougou are under quarantine.

Before the reopening, the main Ouagadougou market was totally hosed down and disinfected, as were other markets around the country, Trade Minister Harouna Kabore said. Loudspeakers repeat messages to the public on measures to help prevent contamination.

Shoppers must disinfect their hands and have their temperature taken. By OLYMPIA DE MAISMONT (AFP)

Shoppers must disinfect their hands and have their temperature taken when entering the market, Mayor Armand Beouinde said, adding that the floor was marked to enforce social distancing.

Police and nearly 500 volunteers will be deployed to encourage public awareness and respect for anti-corona measures, he said.

Vendors and customers alike will be required to wear masks and no more than two customers will be allowed at a time at any stall, according to Halidou Sanfo, who represents vendors.

"We are all called upon to change our behaviour. We can't go to the market as we did before, and we will make sure of that," he said.

Some passers-by expressed doubt over the reopening.

"The disease has yet to be overcome," said secondary school teacher Awa Zoungrana. "The cases are only increasing."

Retired civil servant Albert Nana said he planned to avoid the market for the time being, questioning the rush to resume trading. "The authorities have no doubt reopened the market to prevent unrest."