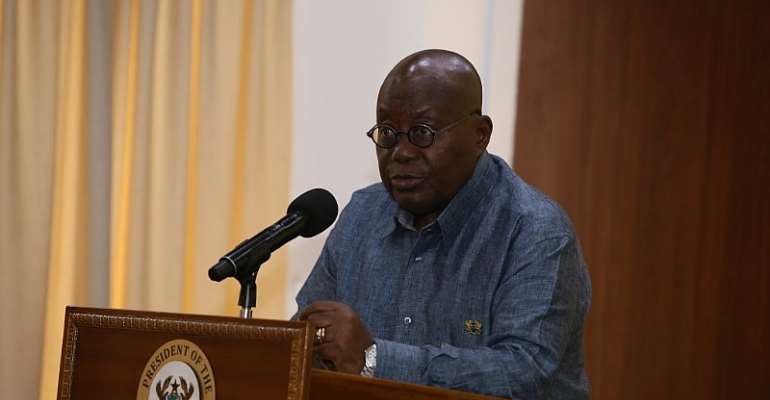 President Nana Akufo-Addo has been explaining the reasons that informed his decision to relax the partial lockdown of the capital Accra and other cities to stem the spread of Covid-19.

The President says the decision to lift the partial lockdown of Accra, Kumasi, Tema and Kasoa, was taken after careful consideration of a number of factors.

According to President Akufo-Addo, the country's current capacity “to trace victims of this disease, being able to test, being able to isolate and quarantine those people so that we take them out of the population, and, of course, the treatment”, are some of the factors that led to the decision to lift the partial lockdown.

Again, the President added that “we are also looking at the demography of the disease itself, in terms of the sick, in terms of death. What we will like to do, as decision makers, is to balance all these factors and to come to a conclusion and a set of solutions that will benefit our people and of course, protect the economy of our country. All of these have been the basket of issues that have led us to take this decision.”

President Akufo-Addo made this known on Monday, April 20, 2020, a day after he made the announcement lifting the ban when he invited the Executive Committee of the Ghana Medical Association to a meeting at Jubilee House to explain the rationale behind the lifting of the lockdown, and deliberate on how Government and the Association can continue to work together post the lifting of the lockdown.

Whilst being hopeful of gaining the understanding and co-operation of the Association, he expressed his satisfaction about the mode of testing and the results that have emanated from the tests.

“The common consensus has recognized that we have undertaken the most pre-emptive testing on the continent in relative terms. That has given us a very large pool of information as to how the disease is unfolding in our country. I think our capacity to be able to continue to do that is very critical for our ability to deal with this virus,” President Akufo-Addo added.

He noted that had Government not taken the decision to aggressively to go out and test infected people and their contacts, “we would not have the figures that we are getting today and yet, we would have had those very same people within the population.”

The testing of nearly 70,000 contacts whose results are known, the President stressed, “continue to give us the demography, the infection rate, the death rate, and the numbers of people who are affected and are moderately ill. All of those things are remaining quite consistent in the data that we have received.”

It is that robust consistency in the data, he explained, “that we have that is inspiring our decision. I called you here this morning for you to hear us and for you to also see the measures that we have.”

As President of the Republic, he indicated that “I cannot ignore the impact that this lockdown is having on several constituencies of our nation, especially the informal workers, a very important part of our economy, who need to have a day out in the market or otherwise in order to provide for their families, who were having a lot of difficulty.”

To members of the Association, the President expressed the appreciation of the nation for the important role all health workers are playing towards helping Government to combat the disease.

“You are the very centre of this battle – doctors and the Association of Doctors in our country. You are very, very central to whatever steps we will take to take this country forward. I thought it was important to meet immediately after the decision that we took last night to ease the restrictions of movements in our two greatest cities-Accra and Kumasi, and to get a bit of a flavour of how we are looking to go about this,” he added.