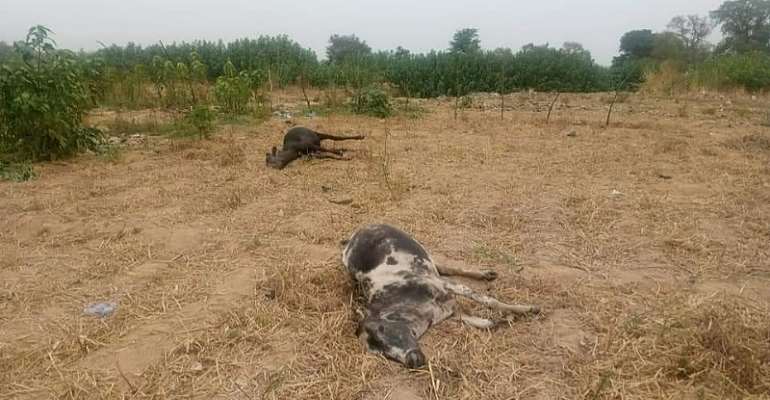 About 13 cattle have strangely died while others are on the verge in the Talensi District of the Upper East Region.

The animals were on Sunday morning found dead and others were left struggling in a village in Winkogo in the Talensi district without any signs or symptoms.

Mr. Jacob Abeka, a farmer in an interview with ModernGhana News at Winkogo said, he has never witnessed such happening throughout his seven years of dry-season farming in the area and hence, believed the cattle might have died after grazing on “wild red guinea-corn”.

He said last week one of his cattle died as a result of grazing the "wild red Guinea corn plant".

The Talensi District Veterinary Officer, Robert Bayuo, said, the cause of the animals’ death is a strange indicating that the team is yet to establish the cause of the death however samples has been obtained from the dead animals for a laboratory test.

He added that researchers at the department of agriculture will soon come out with the test results for the next step.

Mr. Bayou cautioned residents or cattle owners to stay away and avoid touching the dead animals in order to avoid any outbreak.

Mr. Bayuo, tasked his officers on the ground to immediately trace and treat any animals showing any abnormal signs of the disease in the district.

The Assemblymember for Winkogo Electoral Area, Edward Azuah Akolgo, urged residents to abide by the advice given to them by the veterinary officer.

“Although it’s very painful to lose your property which is like your lifetime savings your lives are even far more important,” he stated.

Meanwhile, all the dead animals have since been buried by officials of the Talensi District and Officers of the Ministry of Agriculture in the District Assembly to avoid any infection.