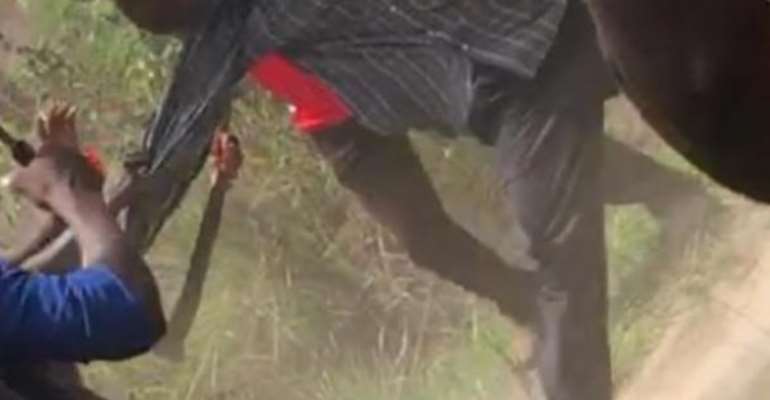 The deceased, a 25-year-old male apprentice was gruesomely murdered on Sunday April 12.

The District Police Commander told the GNA that on Sunday April 12, Togbui Adzidogah III, a Divisional Chief of Zuta-Ga came to report that at about 1100 hours same day, he and his subjects, numbering about 25 were passing through their land boundaries and were attacked by the youth of Zuta-Tsakpi.

Mr Dzineku said the youth of Zuta- Tsakpi numbering about 50 confronted and attacked Togbui Adzidogah and his team at one side of the boundaries with cutlasses, knives, guns and other offensive weapons.

He said in the process, Simon Korbla Eglah allegedly stabbed Senyo Saviour Gagblezu leading to his intestines gushing out. He was pronounced dead upon arrival at the Akatsi District Hospital.

Mr Dzineku said Simon Korblah Eglah and Gideon Agbaglo were arrested in connection with the murder of the deceased, whiles Samuel Ekey and Dotse Michael were also arrested for rioting with weapons without authority.

The Police said they were arraigned before the Akatsi District Magistrate Court and remanded into police custody for further investigation.

The GNA was told that Togbui Dzinake II, a sub-chief of Zuta -Tsakpi, near Akatsi was also arrested on April 17 for abetment of crime to wit rioting with weapons without authority, based on testimonies of his youth currently in custody.

The Police said the body of the deceased had since been deposited at the St. Paul's Hospital morgue for preservation and autopsy as efforts were being made to put Togbui Dzinake before court.