S.African writer Deon Meyer looks back at his 2016 virus thriller 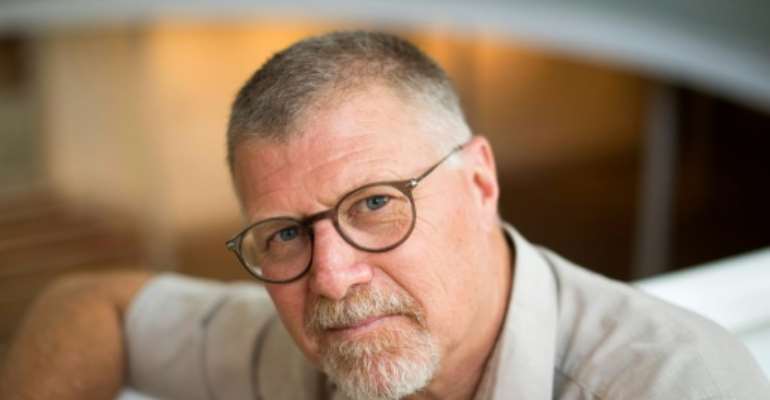 When the first cases of coronavirus were detected in China last December, Meyer admitted going back through his notes in shock. By RODGER BOSCH (AFP)

South African novelist Deon Meyer wished the deadly virus wrecking havoc in his 2016 thriller "Fever" had not turned into an eerily accurate depiction of the coronavirus pandemic ravaging the world.

"I find no pleasure in it," said the crime fiction author and screenwriter.

"I keep thinking of the sorrow of all those thousands of people who have lost loved ones, lost their jobs, and are living in fear."

"Fever" tells the heart-wrenching story of the survival of a father and son in a desolated South Africa after a virus wiped out 95 percent of the world's population.

Upon release, the novel was widely acclaimed as a post-apocalyptic masterpiece worthy of Cormac McCarthy's "The Road", for which the American novelist received the Pulitzer Prize in 2007.

Four years later, the parallels between Meyer's "Fever" and the COVID-19 pandemic are chilling: a coronavirus transmitted from animals to humans, spreading like wildfire across the globe.

In a bizarrely premonitory scenario, borders are shut and characters grow increasingly wary of the other as survival instincts kick in.

"Fever was the culmination of so many different emotions, concerns and a lot of reading," said Meyer, 61, speaking to AFP by phone, locked-down at his southern Stellenbosch home.

"I've always loved post-apocalyptic fiction, and read the genre intensely in my 20s and 30s," he explained.

Those concerns became a source of inspiration in 2012 during a flight back from New York.

"I bought a collection of short stories, and read them on the plane," Meyer recalled. "One of the stories... was post-apocalyptic and got me thinking about other possible directions the author could have taken."

By the time Meyer touched down in Cape Town, the "Fever" storyline had started taking shape in his head.

Over the next three years, the ex-journalist gathered scientific information to feed into his scenario.

"I needed to kill off 95 percent of the world population, but leave all infrastructure intact," Meyer explained. "A virus seemed to be the ideal choice."

Hours of consultations with two virology experts led him to the "best candidate" for the task: a coronavirus.

"They... gave me full details on how it could happen," said Meyer.

The trio's imaginary scenario was fleshed out into the novel's pages.

"A man somewhere in tropical Africa lay down under a mango tree," wrote Meyer. "The man's resistance was low, because he was HIV-positive and not being treated for it. There was already one corona virus in the man's blood."

"In the mango tree there was a bat, with a different kind of corona virus in its blood," he continued. "One that could infect other people easily when inhaled, and with the ability to make them extremely ill."

When the first cases of coronavirus were detected in China last December, Meyer admitted going back through his notes in shock.

"Even most of the developing countries had extensive plans for such an incident," reads another extract of "Fever".

"In theory, these should have worked. But nature paid no heed to theories, and nor did human fallibility."

As he has watched a coronavirus play out in the real world, Meyer felt that most governments had based their responses on "good scientific advice".

"So far, so good," he told AFP, alluding to US President Donald Trump as one of the "few exceptions".

But the author also feared the consequences of potential months under lockdown.

"How long will people be able to consider the greater good as more important than the survival of them and their families," he asked.

Poorer nations, including South Africa, have already been battling to keep citizens indoors -- most of whom live off informal work.

In "Fever", that struggle blows up into a full-fledged war between survivors under the watch of a small group of humans that has engineered the virus.

Similar conspiration theories are making the rounds of social media today, claiming the pandemic was man-made.

Meyer hoped his novel would not provide fuel for "wacko conspiracy theorists".

He found solace in the fact that such people were unlikely to "read beyond a few wacko websites".

As South Africa slipped into its fourth week of lockdown and coronavirus continued to spread, Meyer knew what his next project would be.

"A crime novel," he said. "Set during the lockdown".