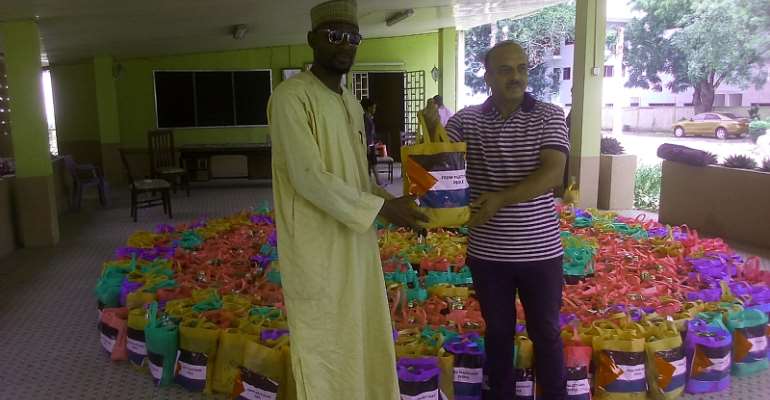 As part of efforts to reduce the impact of the Corona virus (CONVID-19) disease in Ghana, the Embassy of Palestine in Ghana is distributing six hundred (600) packages of food items to vulnerable groups within the Accra Metropolis.

Addressing the media at a ceremony at the Embassy to hand over the packages to leaders of the various groups in Accra on Saturday, April 18, 2020, His Excellency Abdulfattah Ahmed Khali Alsattari, Ambassador of the State of Palestine to Ghana, noted that even though the CONVID-19 disease was also present in Palestine, there was the need to be part of efforts by the Government of Ghana to prevent the infection from spreading and to reduce the impact of the disease on vulnerable groups.

Ambassador Abdulfattah Ahmed Khali Alsattari said although the Embassy had been making benevolent contributions to sections of the people of Ghana over the past five years, this donation was the first of its kind during the outbreak of Corona Virus pandemic in Ghana.

He said the donation was also a sign of gratitude to the Government of Ghana for voting in the Human Rights Council in favour of Palestine and for supporting the Palestinian cause in its quest for self-determination and the rejection of settlements on Palestinian lands.

He commended President Nana Addo Dankwa Akufo-Addo, President of the Republic of Ghana for his continued solidarity with the people of Palestine in their struggle for an independent State.

Ambassador Abdulfattah Ahmed Khali Alsattari equally commended the Ghanaian president for his efforts to contain the CONVID-19 disease and urged individuals, and institutions, such as the COVID-19 Trust Fund, Ghana Health Service and the security services to support the president in the endeavor.

He expressed optimism that efforts by the Ghana Government to contain the disease would yield positive results.