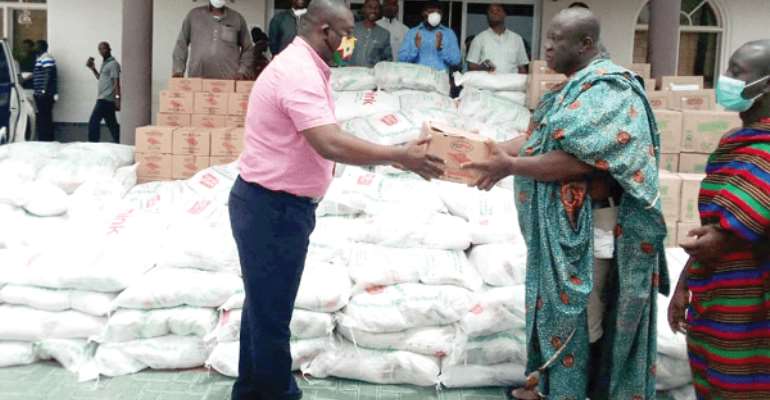 Former President John Dramani Mahama yesterday presented food items to the Manhyia Palace to support the Asantehene’s efforts at providing for the needy in society in the midst of the COVID-19 pandemic.

Mahama encouraged
The Ashanti Regional Chairman of the National Democratic Congress (NDC), Mr Augustus Nana Kwasi Andrews, who presented the items on behalf of the former President, said Mr Mahama appreciated the great work the Asantehene, Otumfuo Osei Tutu II, was doing to provide comfort to many people who were facing difficulties as a result of the partial lockdown.

He said Mr Mahama, therefore, decided to support the Asantehene in his efforts so that more people could be covered.

NDC hits back
The NDC regional chairman said the regional branch of the party took a serious view of comments made by the Minister of Gender, Children and Social Protection, Mrs Cynthia Morrison, on how the former President should distribute his relief items.

The minister recently said it would be proper for the former President to channel the distribution of his items through the ministry.

However, Mr Andrews said it was wrong for the minister to dictate how Mr Mahama should distribute food items to the vulnerable.

He said the Gender Minister should rather come out and account to Ghanaians how government money was being spent on food.

"Mr Mahama is a fine gentleman who does not want to do politics with his food distribution. Unlike the ruling New Patriotic Party (NPP) which is politicising the exercise, Mr Mahama wants to help every Ghanaian on lockdown," he said.

He said the former President decided to donate the items to Otumfuo rather than doing it directly to avoid politicisation.

Baffour Kantakrakyi thanked former President Mahama for his thoughtfulness in supporting the needy.

Other donation
Mr Mahama made a similar donation to the Central Mosque in Kumasi for onward distribution to the Zongo community.