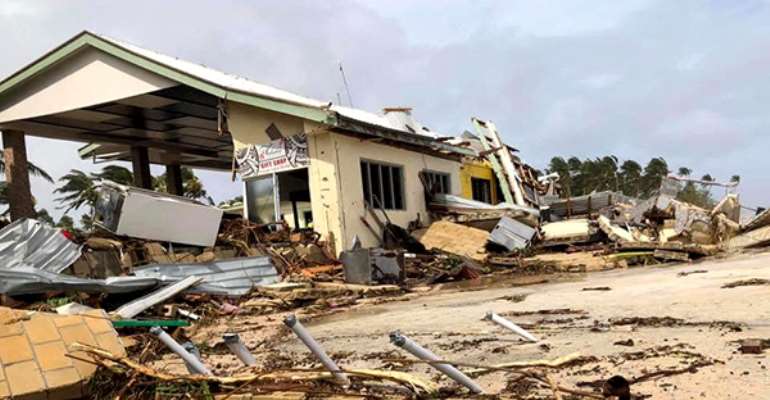 The widespread destruction wreaked by Tropical Cyclone Harold in several Pacific countries just days ago has been nothing short of heart-breaking.

At least 32 people have died, while more than 45,000 men, women, and children in Vanuatu's hardest-hit province, Sanma, are now homeless.

In Tonga, hundreds of businesses and homes were gutted, while Fiji has recorded more than US$20 million worth of damage to crops, raising fears around food security.

Sadly, such superstorms are occurring with increasing and distressing frequency in the region. Powerful Category 5 cyclones – the strongest on the South Pacific scale – have descended almost every year since 2014, costing an estimated US$2 billion in total damages. Building long-term resilience on multiple fronts has become even more pressing, with the COVID-19 pandemic now contributing to a perilous combination of threats in the region.

tonga.jpg
Not only has the cyclone exacerbated the risk of exposure to the disease, but measures to protect against COVID-19 are, in turn, hampering cyclone recovery. In Vanuatu for instance, urgent relief supplies from overseas must sit untouched for three days at the airport to prevent possible contamination. Meanwhile the storm has wrecked health centres across the country and damaged the water supply, hindering basic actions like washing hands. Fortunately, Vanuatu remains COVID-free, but with less than two doctors for every 10,000 people and only two working ventilators in the whole country, there is little room for error.

In Fiji, where 17 cases of COVID have been reported, strict social distancing rules meant evacuation centres could only take a limited number of people during the storm. Curbs on gatherings and movement have kept volunteers from mobilising to help those in need. There are only around eight doctors for every 10,000 Fijians (compared to 30 in neighbouring New Zealand), and rural areas remain vulnerable.

Scientists have long warned that the ferocity and frequency of extreme weather events such as cyclones can be fuelled by warmer oceans, as a result of climate change. Small island developing states are known to be especially vulnerable to climate-related disasters, which can cripple economies and thwart their ability to cope with other crises such as pandemics. It is therefore extremely worrying that so many small states still find it difficult to secure funding to help reduce the risk of disasters and adapt to the impacts of climate change.

Research shows that disaster risk reduction remains a low priority in terms of financing. Over the 20 years from 1991 to 2010, just 0.4 per cent of international aid (or 40 cents for every US$100) was spent on pre-disaster risk management. This despite evidence suggesting it is more cost-effective to tackle risks before a disaster strikes, than reacting afterwards. Information on funding in this area is fragmented and complex, making it even harder for small and vulnerable states to tap into the limited money.

Similarly, for climate finance, smaller countries that lack manpower and expertise can spend many months or even years working through donors' onerous conditions and lengthy processes, delaying climate action and putting communities further at risk. For instance, Tonga is still awaiting the outcome of a proposal submitted to international agencies in 2017 to build 16 kilometres of vital coastline protection. Since then, the country has endured not one, but two super storms (Gita in 2018 and Harold in 2020), while hoping to receive funds for the project this year, according to Commonwealth advisers on the ground.

Simple, easy-to-navigate ways to access money to cope with climate change and manage disaster risk are therefore crucial. Less red tape and better coordination amongst funders, leading to common templates for proposals, harmonised sets of conditions and a simplified approval system would no doubt make life easier for those vulnerable countries that need financing the most.

The reality however, is that multiple disasters is a risk for all countries, and the global community must respond by taking a coordinated, joined up and long-term approach to building resilience.

The Commonwealth is a voluntary association of 54 independent and equal sovereign states.

The Commonwealth is home to 2.4 billion people and includes both advanced economies and developing countries.

More than 60 per cent of the Commonwealth's population is under the age of 30.

Thirty-two of our members are small states, many of which are island nations.

Our shared values and principles are inscribed in the Commonwealth Charter.

Member countries are supported by a network of more than 80 intergovernmental, civil society, cultural and professional organisations

More Opinion
ModernGhana Links
Funny Face and Shatta Wale got it all wrong
Anglo Gold Ashanti: Provide answers to your opaque, shady deals
Problems facing people in the rural areas.
We Bono youths are solidly behind Dormaahene on his radical approach to the Anti-LGBTQI+ Bill
Hon. Ramadan a friend by action; A servant in deeds
Bawumia’s Leadership Style Make Him Delegate’s Choice
The Sin Of The Ghanaian Law Student
Gay Is Anti-African Culture, Stands Against The African Culture And Tries To End Family Lineage
The incorruptible Chief of Staff, Akosua Frema Osei-Opare
TOP STORIES