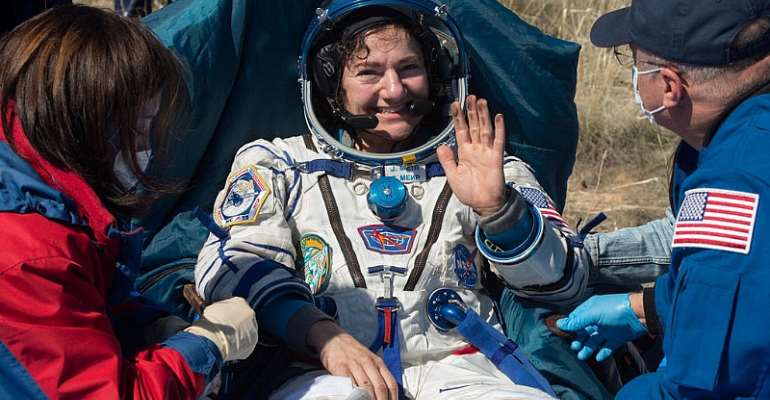 Three astronauts who returned to a coronavirus-stricken Earth from the International Space Station (ISS) on Friday are now dealing with earth-bound isolation and the frustration of being unable to hug their families after spending more than 200 days in space.

Live-streaming the event, the US space agency Nasa described how the Soyuz MS-15 split into three modules before the heat-protected descent capsule hit the Earth's atmosphere at about 25,000 kilometres per hour, creating a plasma trail caused by its rapid deceleration.

"Home safe and sound," the agency said in a tweet. "Today's landing wraps up a 205-day mission for both Jessica Meir and Oleg Skrypochka, and a 272-day mission for Drew Morgan. Welcome home!"

In lieu of the typical welcoming ceremonies held after such a landing, the crew was met by a mask-wearing recovery team – who had been in strict quarantine – and transferred by helicopter to the Baikonur space launch pad. The Russian-leased facility is still in operation despite the closure of most Kazakh airports amid the country's state of emergency.

The three astronauts, the only humans not to have been threatened by the coronavirus over the past five months, now face a longer-than-usual journey home. While Skrypochka will fly to Russia's Star City, near Moscow, Meir and Morgan are being driven three hours south-east to Kyzylorda, from where a Nasa plane will fly them back to Houston.

Returning to a changed world

In a video call with journalists ahead of their return, Meir – a flight engineer who last year took part in the first all-female spacewalk – said the crew looked to be coming home to a completely different planet to the one they left.

"I think I will feel more isolated on Earth than here," she said of the virus-enforced social distancing. “From here, Earth looks just as stunning as usual, so it's hard to believe all of the changes that have taken place.

“But it will, of course, be wonderful to see some family and friends, at least virtually and from a distance for now.”

Morgan, a former US Army emergency doctor, said it was “very hard to fathom” coming back midway through a health crisis.

"As an emergency physician, I know what it's like to be in a hospital or on the front lines of a field hospital," Morgan said. "I'm very proud to be part of that profession, but at the same time, I feel guilt that I am as separated from it as I could be right now."

As well as carrying out research and experiments during her time on board the ISS, Meir shared popular video tips on how to survive living in isolation – namely: keeping a daily routine, maintaining a healthy diet and regular exercise.

Friday's landing – which comes exactly 50 years after the Apollo 13 crew were forced to abort their lunar landing mission – wraps up one of the longest Soyuz flights in the Russian rocket's 53 years of service.

The crew's departure from the ISS passes control of the space laboratory to Nasa astronaut Chris Cassidy and cosmonauts Anatoly Ivanishin and Ivan Vagner, who successfully docked on Thursday.

The new team spent a month in isolation due to the coronavirus, and were unable to say goodbye to their families in person. They leave behind a planet on which 3 billion people are still in lockdown.