Covid-19 And The Bank Hospital 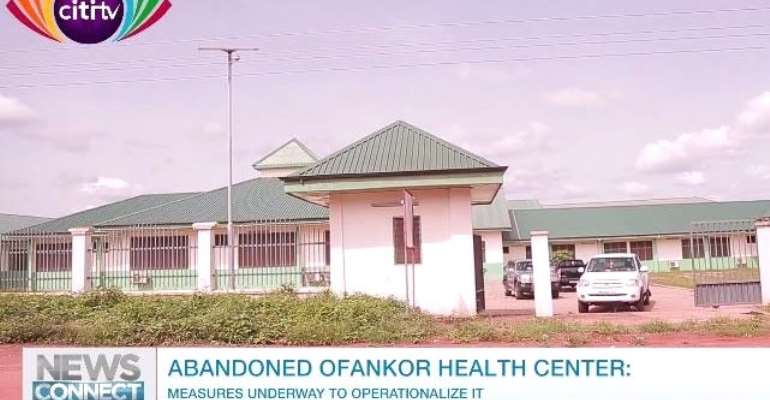 Background
The picture above shows the Ofankor Health Centre which was constructed by the Mahama Administration with funding from the African Development Bank standing abandoned by the government that took over in 2017. Spread all over the country are similar health projects, schools, roads/culverts that have been left to rot. Some of the health projects include district hospitals at Sekyere Kumawu, Fomena, Sekondi, Dodowa, Tempane, and others.

The Bank Hospital
The picture below shows the front view of The Bank Hospital, situated in Cantonments, Accra. This Mahama era hospital has stood ignored for the best part of the last four years, only to be recently rushed into the service of Covid-19 and an ensuing controversy. So what really happened?

The hospital had long before the arrival of Covid-19, been cited as an example of the churlish abandonment of very vital public health and other developmental projects initiated or completed by the Mahama Administration by the successor government after Election 2016. They had been ignored by the government simply because the government did not want to acknowledge the contribution of the Mahama Administration to Ghana’s development. All sorts of reasons have been adduced to either abandon or hold up work on such projects.

But it is worthy of note that in this time of need, the government has recognised its disservice to Ghanaians by scurrying about to rally and leverage the country’s resources, public and private, to confront the pandemic, including the potential use of this ultra-modern hospital for all Ghanaians.

The Bank Hospital fit in a broad strategic orientation initiated by President Mahama to enhance quality health care delivery in Ghana. It was a general call by the government to key institutions to consider, if possible, undertaking development projects in some critical sectors of the economy, including the health sector. For the Bank of Ghana, this call was at the time that the institution was already discussing the expansion of its own clinic and therefore, serendipitously welcomed the idea to scale it up to a fully-fledged hospital as development support to the government agenda at the time.

The hospital project was therefore, independently conceived and funded from the Bank's resources, in the context of the government's debt sustainability management strategy and a tight public budget. Furthermore, it was also consistent with the plan to provide expanded access to quality health care to Bank staff and the general public and partly help stem the increasing practice of seeking foreign medical care at the expense of the country’s limited foreign exchange – and who should know this better than the custodian of our money, local and foreign?

The hospital was envisaged as a useful addition to the national stock of health infrastructure and should have been pressed into service long before the deadly corona virus started threatening planet Earth. This worthy project, started by a previous administration and now, even if rather grudgingly, is being utilized, is an example of how taxpayer money, when applied effectively to good projects, should transcend different political regimes to the benefit of all Ghanaians.

A number of state-owned organizations and institutions often invest in corporate social responsibility initiatives like clinics and even cafeteria to cater for their staff and others in their areas of operation. In this regard the examples that immediately spring to mind are Cocobod, Civil Aviation, Bank of Ghana, VRA, et al, all of which, though enjoying varying degrees of independence are still answerable to the Government of Ghana.

Whenever possible, they have upgraded these clinics into fully-fledged hospitals with all the necessary diagnostic and treatment facilities. That was what happened to the Bank of Ghana Clinic, which today is one of the most up-to-date hospitals in Ghana.

On his elevation, Amissah-Arthur was succeeded by Dr. Wampah, as Governor, appointed by President Mahama. On assumption of office, the new Governor proceeded with his predecessor’s policies which included the hospital project. By this time, the Mahama Administration had come up with the policy referred to above, to encourage state sector institutions that could undertake similar projects without adding to the public sector debt.

In 2013, barely a year in office and confronting the cruel “Pink Sheets” in the Supreme Court, threatening to annul his election, President Mahama gave the thumbs up to Dr. Wampah to proceed with and complete the project as it was in line with government policy. Dr. Wampah was later replaced by Dr. Nashiru Issahaku as Governor, under whose tenure the project was speeded up and completed before he was replaced by the incoming NPP Administration.

The NPP Administration initially decided to add it to the basket of Mahama era development projects to find faults with or ignore as if they never existed. It has therefore been standing unused these past four years, only to be rushed into the service of Covid-19 a couple of weeks or so ago. In announcing the decision, the Minister of Health in an embarrassing slip, gave the real purpose away: It was being readied for them – the VIPs. His retraction was rather too late…That would have been the end of the story if not for the vile revisionist nonsense that followed, trying to deny the Mahama Administration its rightful place in the sun.

Eager to reap where it has not sown, the current government is surreptitiously trying to claim it, and deny the fact of Mahama’s forward-thinking policies and achievements.

Poor Dr. Issahaku. I have read a harsh criticism by an aggrieved citizen, against the former Governor for remaining silent and not coming out to set the record straight. But there is nothing the former Governor can do in this instance as he is abiding strictly by the code of ethics of former Governors. This code enjoins them to keep off Bank issues that do not affect their integrity personally and directly, in which case they would not be faulted for defending their good name. As to being dragged into partisan politics over Bank matters, it is taboo. Not much, or in fact, nothing would therefore be coming from that quarter regarding The Bank Hospital. He should therefore be given some slack for “remaining silent”! From Governors in our recent memory like Dr. Agama, through Dr. Aquah to Dr. Issahaku, they are expected to rise above pettiness and consider themselves as reserves for the State. Reserves that any government of goodwill that should so wish, can consult for the good of country.

And while we are at it, a related big question: When will this government stop doing partisan fault-finding with the much larger University of Ghana Medical School Hospital at Legon and get it going, now that their puerile politics of denial has exploded in their face? Ghana needs all her medical facilities that the taxpayer has already invested in to be brought on stream. Covid-19 is watching and waiting. And oh, by way, when is Terminal 3 going to be officially opened? And again, is the so called national cathedral still a “priority of priorities” with the likes of Covid-19 clearly saying otherwise?

As to the abandonment of The Bank Hospital, there is no need to split hairs, it is already enshrined in the public space and records, no matter what sophistry is employed to diminish its position, as a Mahama era project.

Article
Powered By Modern Ghana
Smoke alarms can save lives in informal settlements – if the design is right
Does US military training incubate coups in Africa? The jury is still out
How changing vaccine schedules can save costs and lives: findings from South Africa
Thank you to Ghana Health workers
Right to Education as an elementary Human Right From Thinking to Living it
Is Destroying China-Ghana Relationship Really Worth It?
Coping with COVID-19 need not derail progress against rabies
The Nexus Between Conflicts And Human Development: Papavi’s Walking-Stick
Suspension of US aid to Ethiopia is yet another example of Trump's disregard for Africa
COVID-19 Updates Live Dashboard
TOP STORIES