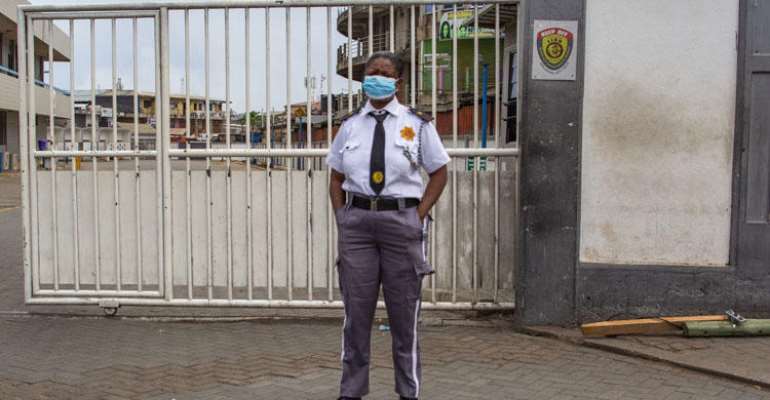 A security guard wears a mask as a protective measure against COVID-19 disease in Accra, Ghana, on April 4, 2020. Soldiers enforcing restrictions related to the pandemic assaulted journalists in two separate incidents. (Nipah Dennis/AFP)

Ghana’s military should investigate the recent attacks on the press by soldiers and hold those responsible to account, the Committee to Protect Journalists said today.

On April 5, in the Aboaba Akurem community in south-central Kumasi city, a group of soldiers attacked and briefly detained Yussif Abdul Ganiyu, a reporter with the German government-funded Deutsche Welle news agency and the local privately owned Zuria FM radio station, according to the journalist, who spoke to CPJ via phone and messaging app, and statements by the Ghana Journalist Association and Deutsche Welle spokesperson Christoph Jumpelt, both of which CPJ reviewed.

Separately, on April 10, soldiers enforcing pandemic restrictions assaulted Samuel Adobah, a journalist with the privately owned TV Africa broadcaster, while he was reporting on a fire in the Ablekuma district of the Greater Accra region, according to the journalist, who spoke to CPJ via phone calls and messaging app, and a statement from the journalist’s association reviewed by CPJ.

“The attacks on Samuel Adobah and Yussif Ganiyu are unfortunately just the most recent examples of security officials in Ghana attacking journalists for their work. It’s a pattern that must be reversed,” said Angela Quintal, CPJ Africa’s program coordinator, in New York. “It is outrageous that soldiers from Ghana’s military are spending time and energy attacking the journalists working to keep the public informed about the COVID-19 pandemic instead of focusing on keeping the public safe and supporting the response to the public health crisis.”

Ganiyu said he was reporting on ditch cleaning efforts to combat COVID-19 when nearby soldiers enforcing lockdown measures called him over and the group’s leader, a female military official, slapped him and asked him why he had criticized the military. Ganiyu said the soldiers then told him to get in their car, but a bystander intervened and he was permitted to continue his reporting.

Ganiyu had recently reported on alleged misconduct by security officials, and on March 31 received a call from the same female military officer warning him to stop publishing critical stories, he said.

After the assault, Ganiyu informed the central Kumasi police station about the incident and had returned to his office when five soldiers arrived and took him to the Criminal Investigation Department of the Ashanti police, he said. At the station, the soldiers questioned him for three hours, forced him to delete the recording of the March 31 call from the military officer from his phone, and again threatened him with violence if he continued his critical reporting, before releasing him without charge, Ganiyu said.

Ganiyu told CPJ that Deutsche Welle reported the incidents to Ghana’s Ministry of Information. On April 14, he gave a statement to a team of investigators with the military police, he said.

In his assault on April 10, Adobah told CPJ that one soldier slapped him to the ground while another smashed his phone. He said that the soldier who attacked him accused the journalist of being part of the media that reported on “everything they came across.” Bystanders pulled them apart and explained to the soldier that Adobah was just doing his job, the journalist said.

Adobah said he reported the attack to police in Anyaa, a nearby community also in Ablekuma district, and that on April 14 he was interviewed as part of a military investigation into the attack.

Contacted over the phone by CPJ, a spokesperson for Ghana’s army, Aggrey Quarshie, said that he was not aware of the attack against Ganiyu, but said any officer found overstepping their boundaries would be sanctioned. Quarshie also confirmed that there was a military investigation into the attack against Adobah.

Your God-fearing attitude, refusal to tenaciously cling to p...
18 minutes ago