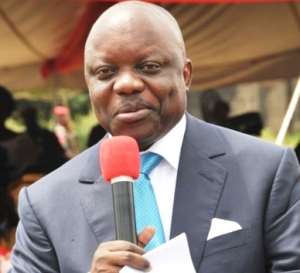 Only those with great brainpower like a former Governor of Delta State, Dr. Emmanuel Uduaghan look up forward, not pulled back by politics of brick bats, but believe in a shared value, in order to help humanity anytime, any day, irrespective of political hiccups that might have been here or there.

This was evident on January 25, 2017, when the ever-forgiving Uduaghan said that he would continue to work for peace and mankind in Delta state. He didn’t look at paid tantrums from some quarters against him when he left power as governor (2007 to 2015). Today, Uduaghan has kept his promise of continued help to the humanity in Delta state irrespective of who paid to blackmail him or who was paid to do the hatchet work in several occasions.

Uduaghan has been restless, just as he does to ethnic issues except solution is proffered, on the issue of global pandemic called COVID-19. On March 24, at about 1pm of that day, he reportedly raised anxiety through his twitter handle, suggesting to government the need for the whole levels of government to implement stay-at-home order to curtail widespread of the virus. A trained medical doctor, Uduaghan’s gesticulation for that proposal was in making sure that ethnic peace and unity which he had been in the forefront for, are harnessed as remarkable legacies but every resident of Delta state ought be alive to witness such, be the person in Urhobo, Ijaw, Isoko, Itsekiri and the entire ethnic nationalities in the state.

He didn’t show easiness over COVID-19, unlike when he was unflustered during the time he contested for the Delta South Senatorial district in the 2019 general election under the All Progressives Congress, APC, but lost to Senator James Manager (PDP). Uduaghan remained unperturbed in that loss. He, however, congratulated with Manager, even though Uduaghan made his discerning points on the court rule that brought Manager to power very clear – differing. Uduaghan never loved ethnic issues, because this could keep him awake till solution to any uprising was proffered.

Uduaghan, providing remedial approach and supplementary panacea in the event of coronavirus to people in making sure that they live healthily, was how he invested heavily in healthcare especially in the area of maternal and child health. He believed that every woman in Delta delivered safely; hence he commissioned a 100-bed Maternal and Child Care Complex and other projects at the Central Hospital, Warri. This was when he was governor. He didn’t end there but lamented that poverty and ignorance were the major factors (as they are today towards Nigerians’ attitude to stay-at-home. Mine) expectant mothers died in the past, but these were addressed in his government through the Maternal and Child Care project. Uduaghan threw his strength in the project than he did to others. In one of his public presentations, he said that he valued the Maternal and Child Care project other than any project like (bridges, buildings, roads, vehicles and any other project.)

Just as Uduaghan advised the tiers of government to stay-at-home, he had advised hopeful women there, when he was governor, to discern child spacing and birth control, or visit the medical resource for appropriate birth control direction. Uduaghan has been showing how splendid it is for one to love his state of origin and country, expressing that love should not stop at border, but should go beyond the Mediterranean Sea and Sahara Desert.

Uduaghan has been showing that it is not only politics that politicians should owe their allegiance to, but also to humanity. He is a selfless patriot spurred by his love for people. It could be his training to save lives as a medical doctor that made Uduaghan to be meek and humble and could go miles in saving humanity. Conversely, did George Washington, 1796, not say mankind should guard against the impostures of pretended patriotism? Uduaghan abhors masqueraded patriotism, and this shall be revealed in subsequent bulletins.

Article
Powered By Modern Ghana
Once Bitten, Always To Be Shy; A Drawdown From Dr. UN Awards
The Chinese Agenda in Africa
Bono Regional Youth Organizer Extols Chairman Of Jospong Group Of Companies
Where Is The Law?
Here's why South Africa and its neighbours are anxious about EU and UK post-Brexit trade talks
Sarkodie, UG VC, ‘Feeding Bottle Plaques’, And Modern Award Scam
Towards A Sustainability Strategy For The Management Of African Football
Curbing Stunting Growth In The Sagnerigu Municipality
Why access to decent toilets could help reduce sexual violence in South Africa
COVID-19 Updates Live Dashboard
TOP STORIES