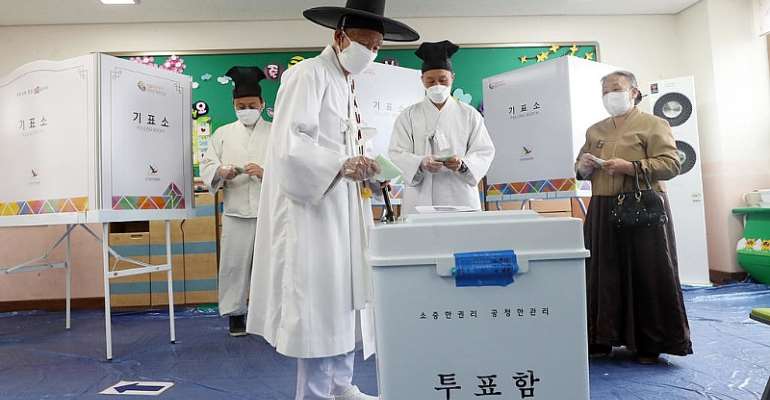 South Korea's ruling party has won a landslide victory in parliamentary elections, with President Moon Jae-In's Democratic Party securing a record absolute majority in the National Assembly. The vote, dominated by the coronavirus pandemic, was the largest victory since democracy was established in 1987.

Turnout, at 66.2 percent, was also the highest at parliamentary elections for 28 years.

The centre-left Democratic Party and its partner Together Citizens Party won 180 out of 300 seats while the main opposition United Future Party took 103 seats together with its ally Future Korea Party.

South Korea's parliament has 253 directly elected seats, with 47 selected through proportional representation. The Democrats won a staggering 52 seats more than during the 2016 elections while the main opposition alliance lost 9 seats.

Saved by the virus

This result would have looked impossible just a few months ago – Moon's political future looked bleak, threatened by scandals over power abuse and disappointing economic growth.

He was also under fire for his new North Korea policy, which led to several high-level meetings with Pyongyang strongman Kim Jong-Un.

But the Covid-19 pandemic may well have saved him.
The government did not give in to calls to postpone the elections, which many came to see as a midterm referendum on the president.

Millions turned out wearing face masks and disposable rubber gloves to cast their ballots in one of the first major votes to be held anywhere in the world since the Covid-19 outbreak.

The outbreak dominated election campaigns preceding the polls, and normally popular issues, such as North Korea, the slowing economy, election reforms and corruption were almost absent.

South Korea reacted swiftly when the virus hit the country, implementing an effective policy of “tracking and tracing", physical and electronic surveillance of infected people and following up extensive testing, isolation and treatment.

The number of infections peaked rapidly, and stabilised at around 10,000 cases and 229 dead.

After it brought Covid-19 under control, Seoul started exporting test kits to at least 20 countries.

Two of the seats of South Korea's 300-member National Assembly will be filled by legislators originally from North Korea.

Thae Yong-Ho, running on a ticket of the conservative opposition United Future Party, became the first defector to be directly elected to South Korea's unicameral parliament.

Tae, 55, defected in 2016 when he was Pyongyang's deputy ambassador to London. He is one of the most senior North Korean diplomats to have defected.

Another defector, Ji Seong-Ho, who made a surprise appearance at President Donald Trump's 2018 State of the Union address, won a seat through the proportional representation system.

He ran as part of the Future Korea Party, a group affiliated with the main opposition. Since settling down here, Ji has campaigned for human rights in North Korea.