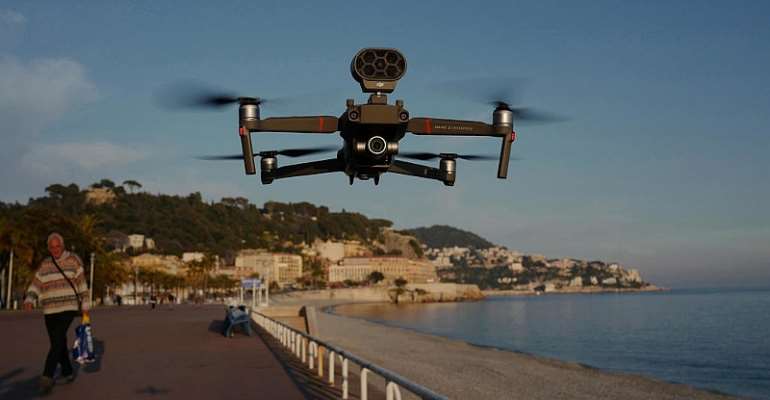 France's interior ministry says its new order for hundreds of drones is not linked to the Covid-19 health crisis. But civil liberties groups fear that the flying cameras, already in use in some French cities, are an attempt to increase mass surveillance.

Earlier this month, the French Interior Ministry published a tender for the supply of 650 drones worth 4 million euros. Companies bidding for the contract have until 19 June to finalise their proposals.

The French order is part of an internal security programme funded by the European Union.

The left-leaning French daily Libération asked the Interior Ministry to confirm which security categories the government's new purchases fell into, and if all the drones on order are covered by the EU funding programme.

Libé was told that the order corresponds to the needs of national security at all levels, adding that the order was placed at the end of 2019, and had nothing to do with the Covid-19 crisis.

Civil liberties groups are concerned that this is a further step in what they see as a generalisation of drone use, under the cover of enforcing the confinement measures in place to prevent the spread of coronavirus.

The French website la Quadrature du Net, which specialises in digital technology and human rights, spoke out about the use of drones earlier this month, pointing out that they are already being used in several French cities to make sure the population was adhering to the lockdown.

The organisation has deplored the lack of a framework in French law when it comes to drone use and the guarantee of civil liberties.

A message published by the Facebook group known as Cerveaux Non Disponibles (No Brains Available) and reposted over 11,000 times challenged the spending of public money on security, considering the gravity of the current health crisis.

"While hospitals are struggling with a lack of masks and protective clothing due to the government's lack of foresight, we're seeing more fines issued than tests, this is a clear sign of a society under surveillance."

Since the beginning of lockdown on 17 March, drones have been used to survey public spaces in Nice, and the wider Alpes-Maritimes region, where the private company Drone 06, has been hired to assist police patrols.

There are currently 300 drones used by the French gendarmerie and around 110 used by national police officers. Most models include a loud-speaker which broadcasts a message to remind passers-by of the lockdown rules.

Across the country, the gendarmerie and national police have used their own stock of drones to patrol major cities such as Marseille, Lille and Paris as well as French coastlines, river banks and lakes.

Amnesty International France has issued a series of recommendations for EU member states to avoid possible human rights abuses during the crisis, and called for the French government to be vigilant when policing confinement.

"The Covid-19 pandemic has affected our societies as a whole, including how institutions operate. In these troubled times, the temptation is great for governments to ignore fundamental rights," insists Cécile Coudriou, director of Amnesty France.

France voted a state of emergency for health law on 20 March which allows the government more powers to manage the Covid-19 crisis, such as suspending the fundamental freedom to move around and hold peaceful gatherings. For Amnesty these restrictions must remain strictly "necessary, proportionate, and limited".

As for police controls, Amnesty warns against the use of excessive force, and the checking of the individual permission slip must respect the legal rights of individuals, without discrimination.

"We ask that public authorities cease the restrictions as soon as the health crisis is over," declared Coudriou, "and in no way should these measures become common law."

Amnesty is particularly attentive to the use of digital tracking measures which are being employed in other countries and rely on the geolocation of mobile telephones.

To prevent the infringement of privacy, Amnesty says any collection of data should remain anonymous and if they need to be personalised, users must consent to the use of their data, in line with French law and European directives.