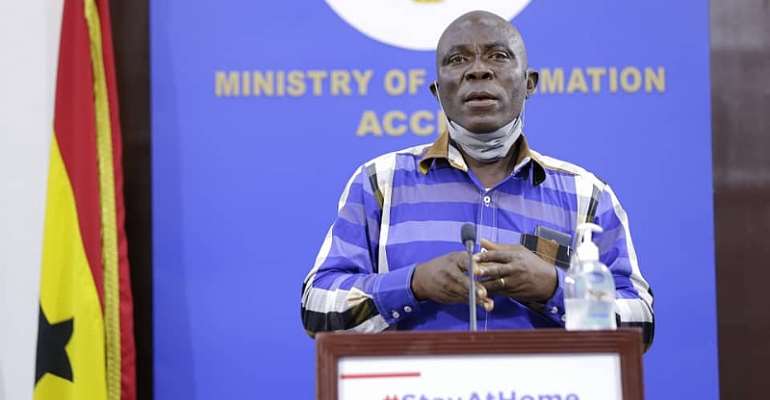 A father of four who has recovered from the Coronavirus disease in Ghana on Thursday recounted how he was diagnosed with the disease, his fears of imminent death, the wailing of his family, and his amazing recovery following treatment.

Mr Frederick Drah said he tested positive for COVID-19 on Wednesday, March 18 after visiting the Tema Polyclinic after suffering a fever the night before.

Narrating his ordeal to the press on Tuesday at the Ministry of Information in Accra, Mr Drah said “In fact, it wasn’t easy for me.”

He said while in bed at about 12:15am, he started feeling feverish and there was a sudden dryness in his throat.

“I called my wife and she gave me some two tablets of paracetamol and within the shortest time I was feeling warm and I was able to sleep again. The next day I decided to go to the hospital. I visited Tema Polyclinic and they did malaria test, BP, sugar and about four tests and they realised that I was negative.

“They took my temperature and they realised the temperature was above…it drew some suspicion but still I was not clear in (my) mind. So, they called me to an isolated place and I sat there for about 45 minutes and no one was attending to me,” he said.

He said a man dressed in a PPE later came to attend to him, took a mouth swab, after which he was asked to go home.

“The following day, Thursday, I received a strange call… the gentleman told me that they took my sample and they found out that I am COVID-19 positive. In fact, it wasn’t easy for me. I tried to control myself." He said the doctor told him to isolate from the rest of the family.

He said he was then informed that an ambulance would come and pick him to the hospital; however, the ambulance did not arrive until Saturday at about 5pm.

“That is the place where I saw myself dying simply because of the information out there. I also thought that when you get the disease, within 3 days you are gone… the only thing I could tell my wife…I just waved her,” he added.

According to him, he did not think he would survive the disease, and urged all to stay at home as much as possible resisting any temptation to step out unless it is so essential.

He commended the health officials at the Ga East District hospital for the service they rendered to him.

He said since being discharged on Sunday, March 22, his family has faced stigmatization from the community.

He therefore took the opportunity to urge the public to desist from stigmatizing people who have suffered from the disease.

More Headlines
ModernGhana Links
Contracts for 27 Mahama E-blocks terminated
You have no authority to banish, kill anyone for being gay; it's illegal, undemocratic – Group to traditional rulers
'Withdraw hate-filled anti-LGBTQ+ bill fast fast' – Amnesty International
We are dismayed at CHRAJ, NCCE’s loud silence on anti-LGBTQ+ bill, attacks; do the right thing – Akoto Ampaw, others
Bawumia to speak on digital economy on November 2
Construct your own roads if you can build GHS5m mansions; stop putting pressure on government – Botwe to developers
No energy to solve health issues but you say no delay to pass anti-LGBTQI bill – Group tackles Bagbin
Akufo-Addo cuts sod for US$24.8 million housing project for troops; presents 50 vehicles to army
Bagbin summons police to privileges committee over harassment of Madina MP
TOP STORIES