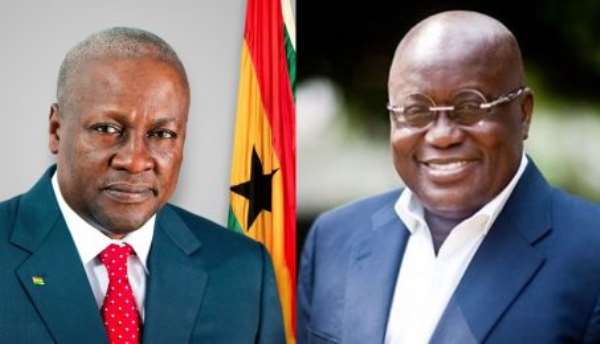 The continuous attempt by some high government officials in Akufo-Addo's government to disintegrate this peaceful country is worrying. Until recently, I did not know, it was Former President John Mahama who is still in charge of the Ghanaians in the five northern regions and some part of the Bono regions in Ghana, and as such must provide them with vaccines and medications for the treatment of the deadly Cerebrospinal Meningitis (CSM) epidemic in the Meningitis belt in Ghana.

Nana Hesse Ogyiri, a presidential staffer in Akufo-Addo's government comment on Facebook following the outcry by well-meaning Ghanaians on the government to pay attention to the spread and containment of CSM epidemic which has a mortality of 40% of its patients as compared to the 3% Covid-19 epidemic, while about 20% of the CSM patients survive but end up with permanent health problems such as epilepsy or mental illness.

This apology of a presidential staffer's comment "tell Mahama to buy vaccines for his people", is very appalling, indefensible, and completely at odds with public officer, and this demonstrates how ignorant, reckless and vindictive he is. This type of bigotry and hate speeches have no place in our democracy.

Astonishingly, our President Nana Akufo-Addo's silence on some of these comments that seek to plunge this peaceful country into chaos only goes to affirm his believes in the use of identity politics to promote tribal interest and victimize other Ghanaian tribes.

Nana Hesse's comment uphold President Akufo-Addo government's lackadaisical attitude towards the containment of the CSM in the Meningitis belt of Ghana.

Fortunately, the listening Former President John Dramani Mahama, has accepted the challenge from Nana Hesse Ogyiri and has supported his people, the Northerners, with vaccines and medication amounting to Fifty Thousand Ghana Cedis (GHc 50,000.00).

Similarly, 9 -18th October 2012, under the leadership of the Former President John Mahama through the Ministry of Health and its development partners immunized almost Three Million (2,999, 293) Ghanaians in the meningitis belt of Ghana after the introduction of the vaccines in 2010.

Many have referred a true leader be somebody who has confidence to stand alone, courage to make tough decision, and has the compassion to listen to the needs of his people. Thus, the prompt respond by the former President Mahama instead of proposing to use his future salary, only demonstrates his commitment and passion to contribute to the inhibition of the epidemic.

As citizens, some of these challenges only afford us the opportunity to identify and associate with a leader who has humility, empathy and is positive to his people so when the time comes, and we are given the chance to make a choice, we can change the bad and insensitive government of Nana Akuffo-Addo and make way for John DRAMANI MAHAMA.