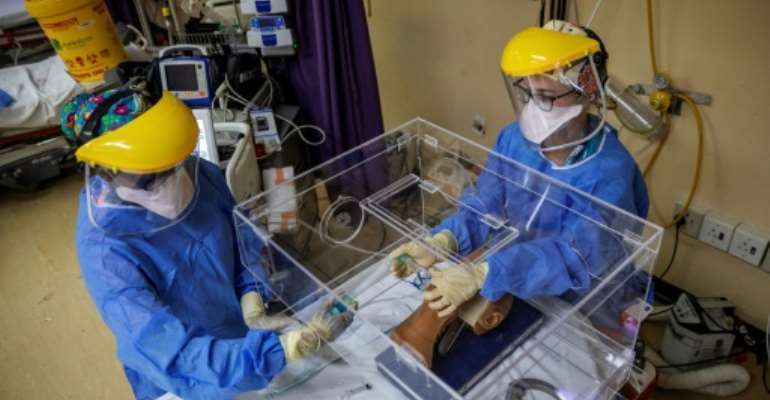 The 'intubox' creates a protective space around a sedated and intubated patient. By Michele Spatari (AFP)

Eyes narrowed in focus behind her face shield, doctor Jana Du Plessis kept a steady hand as she inserted a tube down the throat of a dummy, working through the lid of a plexiglass box.

The "intubox" is the brainchild of four local doctors inspired by a similar "aerosol box" used in Taiwan for sedated and intubated patients.

The South Africans added holes to the original design as well as covers for the openings, creating a protective, transparent but accessible box intended to shield workers from dangerous respiratory droplets.

"This box will create a seal around the patient so that whatever further procedures are needed will happen inside the box," she explained, manoeuvering tubes and drips through circular side flaps.

Doctors across South Africa are bracing for a potential surge in critically-ill patients as the number of infections continues to rise.

More than 2,500 cases have been detected, the highest in Africa, including 34 fatalities.

The box aims at preventing health workers from being infected by respiratory droplets -- even ultra-fine particles called aerosols can carry the virus, according to mounting evidence. By Michele Spatari (AFP)

Less than 10 patients have been admitted to intensive care so far.

"At the moment we don't have a lot of serious cases," said ICU specialist Abdullah Laher. "But we don't know what's going to happen in the future."

The predominance of milder COVID-19 infections has provided some time for hospitals to prepare and distribute protective equipment to staff, particularly those working in intensive care units.

"Sicker patients are potentially more virulent," Laher explained. "If they cough or splutter they are likely to exude more virus into the atmosphere."

The box covers only the top part of the body, from the shoulders upwards.

South African companies have sponsored a first batch of 500 "intuboxes" for public and private facilities in Gauteng, the most populous and worst-hit province so far.

The devices costing under $200 (183 euros) each. There are plans to manufacture another 1,000 such boxes for distribution around the country.

Dr. Feroza Motara, who heads the emergency department, said there had been huge interest from abroad and the "intubox" patent will be open to international manufacturers.

"I have had people from America enquiring, from Dubai and from the rest of Africa," said Motara.

But she also cautioned against using the box as a replacement for personal protective equipment, which is in dire shortage in most countries.

"The box doesn't mean that you forget everything else."

Like most public hospitals, Charlotte Maxeke teaching hospital has relied heavily on donations to pull together a small stock of face masks, goggles and plastic aprons.

Staff had been concerned about running out and eventually catching the respiratory disease.

‘We Won’t Tolerate LGBTQ+’ —Ga Chiefs back criminalization b...
16 minutes ago