By James PHEBY, with AFP bureaus 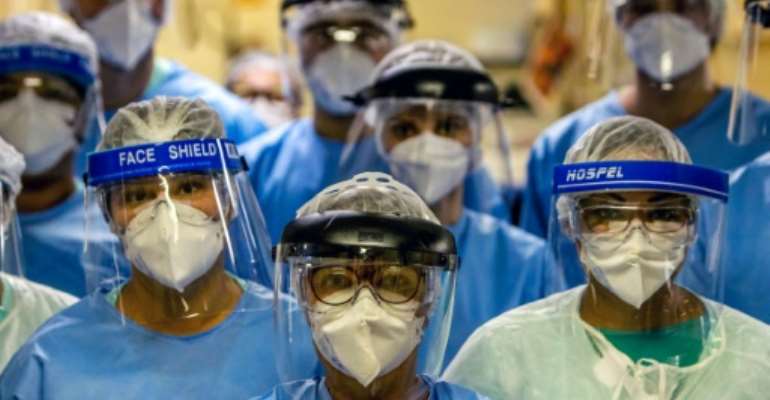 A group of doctors working with patients infected with the novel coronavirus COVID-19 wear face shields at the Intensive Care Unit of the Hospital de Clinicas in Porto Alegre, Brazil. By Silvio AVILA (AFP)

Parts of Europe moved cautiously to reopen their streets and economies on Thursday but the coronavirus pandemic was far from beaten and the World Health Organization warned the continent was still in the "eye of the storm".

Since emerging in China late last year, the virus has turned the world upside down, killing tens of thousands, forcing half of humanity indoors and raising the spectre of a second Great Depression.

Hope that its spread has peaked in Europe and the United States has seen some countries take tentative steps to ease restrictions, with US President Donald Trump set to unveil plans on Thursday for lifting lockdowns across the world's top economy.

Global spread of the coronavirus. By Simon MALFATTO (AFP)

But with global cases and deaths still growing -- and fears of a second wave of infections in previously hit countries -- officials are warning that life around the world will not be returning to normal until a vaccine is available.

"We remain in the eye of the storm," the WHO's regional director for Europe, Hans Kluge, said in an online news conference from Copenhagen.

Positive signs in Spain, Italy, Germany, France and Switzerland were overshadowed by sustained or increased levels of infections in other countries, such as Britain, Turkey, Ukraine and Russia, he said.

Healthcare employees of the Georges Pompidou European hospital respond to taxi drivers who gathered in front of the hospital to applaud them in Paris. By Martin BUREAU (AFP)

"It is imperative that we do not let down our guard."

More than two million people have been infected with the virus around the world and 137,000, including 90,000 in Europe, have died, according to an AFP tally.

Hard-hit parts of Europe have seen a slowdown in infections and deaths in recent days, with Spain recording 551 new deaths on Thursday, almost half of the daily toll at its peak.

After weeks on strict lockdowns, Spain and Italy have begun to ease restrictions, allowing some businesses to reopen.

Members of the medical staff at the Mohammmed V military hospital, wear a protective masks and caps as they wait for patients, in the Moroccan capital Rabat. By FADEL SENNA (AFP)

Germany on Wednesday also announced initial steps to reopen some shops and gradually restart schools, Denmark began reopening schools for younger children after a month-long closure and Finland lifted a blockade of Helsinki.

US 'passed the peak'

Trump has promised swift guidelines on reopening parts of the United States, telling reporters his "aggressive strategy" against the virus was working and that "the data suggests that nationwide we have passed the peak on new cases".

"We'll be the comeback kids, all of us," said Trump.

Workers prepare a burial site for a victim of the COVID-19 coronavirus at a cemetery in Jakarta. By BAGUS SARAGIH (AFP)

As European residents began to emerge from their homes, some feared it may be too soon.

In other parts of Europe, severe restrictions were set to remain in place for weeks, with Britain expected to extend its lockdown measures later Thursday.

United Nations chief Antonio Guterres said only a "safe and effective vaccine" can return the world to normal, hoping that could be available by year-end.

Transport personnel wearing hazmat suits guide travellers arriving from Wuhan to buses, which will take them to their quarantine locations, at Beijing West Railway Station. By Noel CELIS (AFP)

"There are seven billion people on the planet," said Gates Foundation CEO Mark Suzman. "We are going to need to vaccinate nearly every one. There is no manufacturing capacity to do that."

Even with a vaccine, the virus is expected to lay waste to the global economy, with the International Monetary Fund warning that $9 trillion could be lost in a second Great Depression.

In the developing world, there are growing fears of a collapse in social order as food becomes scarce -- with the situation especially acute in Africa and Latin America.

In Riyadh, G20 nations of the world's major economies announced a one-year debt moratorium for the world's poorest nations.

The White House said Trump and other leaders of the G7 would discuss cooperation by video conference on Thursday.

But even in the US, the pandemic has caused at least 17 million people to lose their jobs and many are becoming increasingly desperate.

Doctors coming out of the red zone at the Intensive Care Unit (ICU) are carefully disinfected by hygienists at the 14 Military Hospital in Monrovia, Liberia. By Zoom DOSSO (AFP)

"At the end of this month, I'm done," said Reuben Isaacson of Boca Raton, Florida, who was laid off from an e-commerce startup in March.

"When the moratorium on evictions is lifted and Florida hasn't paid anybody any money, a bunch of people are going to be homeless and that includes me," he said.

'We will survive this'

Despite the gloom, tales of resilience and generosity around the world lifted spirits.

Healthcare workers wearing protective suits wait during a COVID-19 testing campaign at a care home for the elderly in Barcelona. By LLUIS GENE (AFP)

In the central English city of Birmingham, Connie Titchen, aged 106, defied the odds to beat the virus, applauded by medical staff as she left to see her grandchildren.

Also in Britain, Tom Moore, a 99-year-old World War II veteran, completed 100 laps of his garden to raise more than £12 million ($15 million), in a fundraising challenge for healthcare staff that captured the heart of the nation.

"In the last war it was soldiers in uniform on the front line. This time our army are the doctors and nurses (in) uniforms," Moore told British TV earlier this week.

"We will survive this."

And in New Orleans, Burnell Cotlon spent his life's savings to open a grocery store, providing a lifeline for many struggling to pay for food as a result of the coronavirus outbreak.

"The whole world has changed," he told AFP.

Many of his customers have been laid off and are struggling to provide for their families, he said.

"Because they're not working anymore, they don't have any money. But they still have to feed their kids.