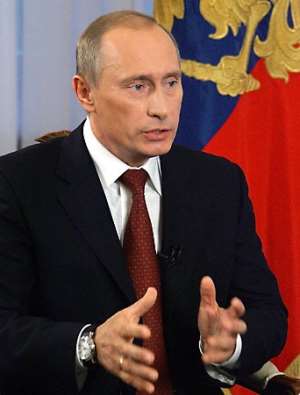 In separate early April discussions with South African and Ethiopian leaders, Russian President Vladimir Putin pledges Russia’s support in collaborating with Africa fight coronavirus that is currently spreading among the population across the continent.

With the Ethiopian Prime Minister Abiy Ahmed, the Kremlin press reported that "while discussing the situation caused by the spread of the coronavirus, both parties stressed the importance of invigorating efforts of the entire international community, including the IMF and the World Bank, to combat the infection. They have also considered some topical aspects of developing bilateral relations."

South African President Cyril Ramaphosa has taken over from President of Egypt Abdel Fattah el-Sisi as the Chair of the African Union. South Africa is a member of BRICS. Russia presides over BRICS in 2020.

"Opportunities for cooperation to counter the coronavirus pandemic and its consequences were discussed, particularly considering the results of the recent G20 digital summit," the Kremlin’s official statement says. "Cyril Ramaphosa as the head of the country chairing the African Union informed Putin about the steps planned to be taken by this regional organization."

The G20 virtual summit held late March, Putin proposed the establishment of a special fund to help Africa and further stressed the necessity to continue the regular exchange of credible information about the global pandemic and about the actions taken by various regions and individual countries.

He emphasized the provision of all forms of aid to affected African countries amid the coronavirus pandemic and its impact on the global economy.

As a top-priority task in healthcare, Putin called on the World Health Organization (WHO) to channel its efforts to detecting hidden coronavirus epidemics in the countries that are not able to organize testing, also about joint research by countries that could significantly expedite the development of vaccines and medications. Russia expressed its support for the proposals for a comprehensive approach to mobilizing international support for Africa.

The same decree earmarks about $804,795 to fund expenses of the Vector Institute and the Central Research Institute of Epidemiology, "connected to production and shipment of tools for laboratory diagnosis of the novel coronavirus infection, and material and technical support to countries of Eastern Europe, Trans-Caucasus, Central and Southeast Asia, the Middle East, Africa, and South America."

This year, South Africa is chairing the African Union. As Chairperson of the African Union (AU), Cyril Ramaphosa discussed the African response to the Covid-19 pandemic across the continent, and that included efforts to sustain the hard-won developmental and economic gains.

He gave an urgent need for medical supplies and equipment and further called for international cooperation and support while upscaling local production on the continent.

The African Union Covid-19 Response Fund established on March 26, to which members pledged the sum of $12.5 million and an additional $4.5 million to the Africa Centres for Disease Control and Prevention (CDC).

Estimates from health organizations said there were more than 10,000 confirmed cases of coronavirus across the continent. According to the latest data by the John Hopkins University and Africa Center for Disease Control on COVID-19 in Africa, it offers a breakdown whole of Africa.

Foreign countries are contributors to the functioning of the World Health Organization. For example, the U.S. is the single largest funder of the organization, providing more than $400 million each year - about 15% of its total budget. WHO has come under criticism.

Many countries especially the U.S. and Britain, believe that WHO's reluctance to confront China over its handling of the coronavirus outbreak is the reason it has now become a pandemic, with most Western countries being forced to introduce lockdown measures in a belated attempt to limit the spread of the virus.

In late December 2019, Chinese officials notified the World Health Organization about the outbreak of the disease in the city of Wuhan in China. Since then, cases of the novel coronavirus - named COVID-19 by the WHO - have spread around the world.