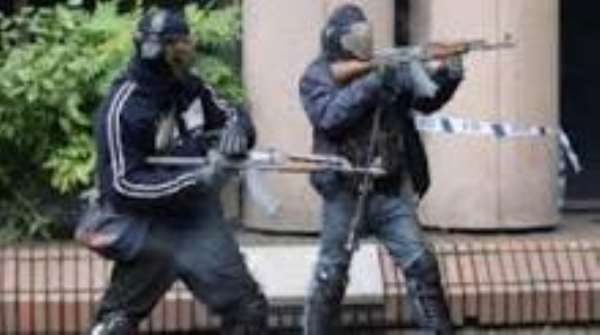 As armed robbers terrorizes, torture, and render unspeakable havoc on unsuspecting victims, residence of Navrongo-Naaga and traders alike who commute the Navrongo-Naaga road in the Kasena Nankana municipality of Upper East, poured out their tears of sorrow and hopelessness.

The Navrongo-Naaga road is increasingly becoming a fertile ground for miscreants who capitalized on the poor police presence to rob residence and traders alike of their valuables.

The robbers, residence say, are equally taking advantage of the poor road network to ply their ungodly profession.

Navrongo central constituency youth organizer, Prosper Adongo told this reporter that the continuous robbery on the road is making life unbearable to both residence and traders. “My brother, look, it is a very worrying situation that needs urgent security attention. Recently, my constituency secretary and organizer were victims to a disgusting robbery on that stretch of the road. They were robbed at gunpoint. Gun wielding robbers, holding AK 47 riffles.”

He added that “you see, the road linking these two towns is very bad, giving these robbers upper hand over their poor unsuspecting victims. The Municipal Chief Executive should work on the road. More accidents are recorded on that very road due to the poor nature of the road.” -

Residence opined that if the police visibility along that stretch is increased, it will go a long way to minimize the unbearable rampant robberies that residence and traders endure in the hands of robbers. “Mostly, these robbers operate on market days. After suffering to sell through the scorching sunny weather, you are robbed of all your sales. It is very bad," said a resident.

Some residents recount past horrific instances where traders on the stretch have been subjected to severe beatings by robbers. Most of the robberies, they say, usually take place on Market days.

Mr. Adongo noted that “In Navrongo municipality, the police station is centralized. There are no checkpoints in the villages as well as police stations. If the command can put in structures, it will help curb the menace. I am calling on the MCE, who is the head of Municipal Security Council (MUSEC) to look into it. He should not be armchair leadership. The situation is very bad” he fumed. He lamented that prominent persons in the municipality have fallen victims to numerous robberies on the said road but nothing is been done on it.

Kasena Nankana municipal police commander, DSP Agyare Francis, who described the situation as worrying, told this reporter in a telephone interview that measures are been put in place to stop the menace. DSP Agyare noted the efforts are equally made to extent measures to other routes. He was optimistic that with the said measures, his men will win the fight over the robbers. He called for cooperation from the general public so as to fight the menace.