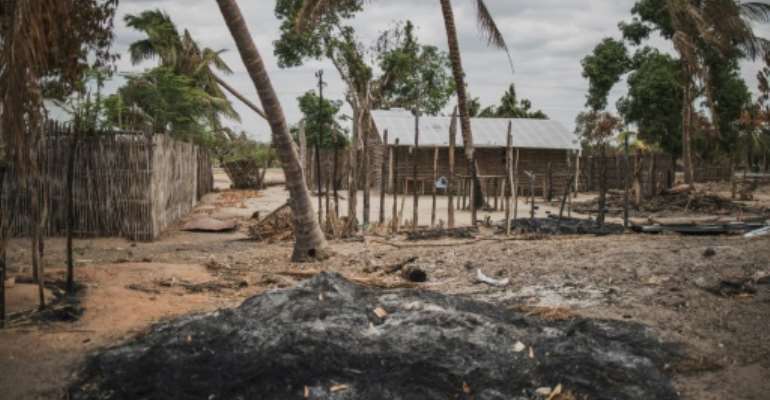 A mound of ashes is seen in the recently attacked village of Aldeia da Paz outside Macomia, Mozambique, on August 24, 2019. By MARCO LONGARI (AFP/File)

Militants have in recent weeks stepped up attacks as part of a campaign for an Islamist caliphate in the gas-rich region, seizing government buildings, blocking roads and briefly hoisting their black-and-white jihadist flag over towns and villages across Cabo Delgado province.

The EU "expresses its grave concern at the visible deterioration of the security situation in Cabo Delgado province in recent weeks, particularly the significant increase in attacks," the delegation said in a statement.

It also said it was worried over the worsening humanitarian situation, with a spike in the number of internally displaced people.

"The present situation requires effective action to protect citizens, to carry out investigations to bring those responsible to justice, and to identify the role played by violent extremist groups," it said.

The delegation also called on the authorities to "quickly and thoroughly" investigate the disappearance last week of a journalist working for a community radio in Palma.

He texted his co-worker to say that he had been surrounded by soldiers, and thereafter he did not answer his calls, according to the Media Institute for Southern Africa (MISA-Mozambique).

The EU said it stands ready to help Mozambique resolve the crisis.

Soldiers from the Mozambican army (pictured March 2018) patrol the streets after security in the area was increased, following a two-day attack from suspected islamists in Mocimboa da Praia. By ADRIEN BARBIER (AFP/File)

Despite President Filipe Nyusi's promises, neither the police nor the army, recently shored up by foreign private security companies, has succeeded in preventing attacks.

The conflict has already killed more than 700 people according to Doctors Without Borders (MSF). The bishop of the diocese of Pema, Dom Luiz Fernando Lisboa, has said more than 200,000 people have been displaced by the fighting.