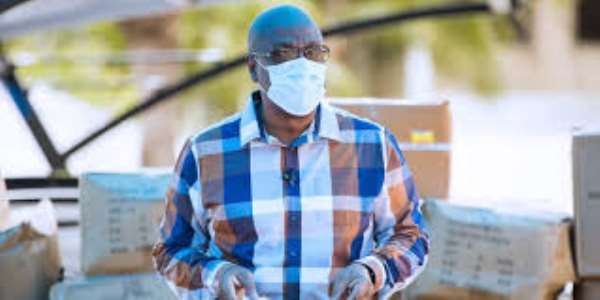 A Deputy Secretary of the NDC in the Asante Akim Central has lauded the efforts of the former President John Mahama in containing the COVID-19 pandemic in the country.

According to Mr. Emmanuel Opoku Mensah, unlike Nana Akuffo-Addo, Mr. Mahama, even though not in government has exhibited an extreme commitment to the fight against the Covid-19 pandemic which is ravaging the lives of many not only in Ghana but across the globe.

'Whereas Mr. Mahama has been proactive and overly responsive to the needs of the health workers across the nation, by providing PPE among others, the president has sadly donated his unpaid salaries. And I don't know whether the salaries when paid would be expended on coffins to carry to the cemeteries, the mortal remains of the victims he failed to redeem timeously?', the seemingly worried deputy secretary fumed.

Speaking to journalists after Mr. Mahama had supplied food items to 20,000 households, Mr. Opoku Mensah commended the gesture saying that this is what is expected of leaders and not deferred donation of salaries.

He asserted that the government has adopted a populist approach to the fight against covid-19 while it appears to be dead silent on the effects of meningitis which is more dreaded than covid-19.

'Is the government's inertia on the fight against meningitis as a result of the fact that CSM hasn't caught serious international attention? Are you aware not less than forty lives are lost to CSM in the northern part of our country and in addition, some lives in Asante Mampong and Nsuta in our region are not spared too?' he questioned in a dejected tone.

The Ashanti Region Communication Team member reiterated that the former president whose feeling for the have-nots and the vulnerable is beyond measure, last week donated PPE and other medical supplies worth GH¢ 50,000 to help fight meningitis and Covid-19 in the Upper West Region.

Reacting to the increasing number of confirmed Covid-19 cases, the vociferous communicator revealed that the government reneged on its commitment to effectively sensitize Ghanaians on the dangers of the virus and the right precautionary measures to take.

'Until recently, most of the adverts by the government on sensitization of the pandemic was done in the Queen's language only. How many of our compatriots who are not privileged to access formal education can benefit from such adverts? Mr. Opoku quizzed journalists.

He, however, heaped praises on the private media outlets- print and electronic for their invaluable roles in dedicating their precious airtime in educating their audience in the local languages detailing all that the public ought to know regarding the pandemic.

He prayed the president to emulate the gesture of the former president and contribute now.

However, he advised that if the president will not heed his advice, he should ensure that state funds and private cash donations are expended timely to procure PPE and other medical supplies and sent to all health facilities across the country including private health providers.