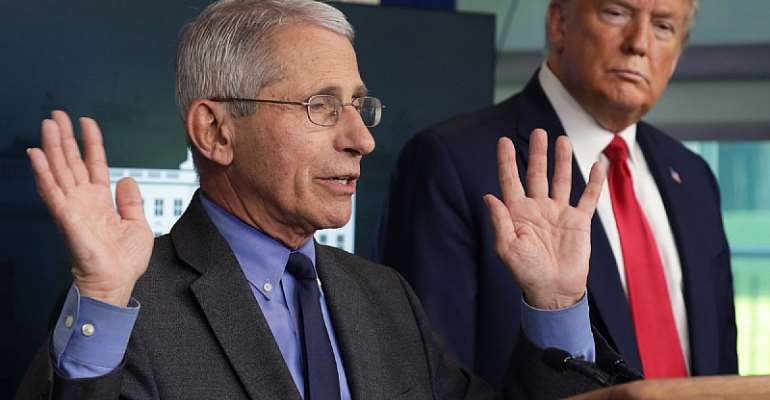 Anthony Stephen Fauci is an American physician and immunologist who has served as the director of the National Institute of Allergy and Infectious Diseases since 1984.

The intemperate volcano that is the US President has done much to burn its way through prominent appointments. As the title of former GOP strategist Rick Wilson’s book goes, Everything Trump Touches Dies. There seem few more important individuals in the United States than Dr Anthony Fauci, and that, for the White House, is a problem. No burning bushel can distract from the orange tufted centre of power that is Donald Trump, and Fauci, as director of the National Institute of Allergy and Infectious Diseases, has been giving much to distract.

Over the weekend, the disgruntled anti-Fauci clan started buzzing with the hashtag #FireFauci, the underachieving work of DeAnna Lorraine. Lorraine, former challenger for Speaker Nancy Pelosi’s California House seat, likes to share material from the QAnon group, which takes pride in, shall we say, cavalier narratives pullulating with fantasies. (The fictional Hillary Clinton-Barack Obama child sex trafficking ring; the canard of Angela Merkel really being the granddaughter of Adolf Hitler.)

Momentum was generated by President Trump’s Sunday retweet of a call to fire Fauci. Lorraine, in the tweet in question, was exercised by Fauci “now saying that had Trump listened to the medical experts earlier he could’ve saved more lives.” But, she claimed, it was the medical expert – one Anthony Fauci – who told people on February 29th “that there was nothing to worry about and it posed no threat to the US public at large.” Time, then, to fire him.

Fauci, for his part, stated on CNN’s State of the Union programme on Sunday morning the obvious point that restrictive measures, had they been imposed earlier, might have lessened the harm. “I mean, obviously, you could logically say that if you had a process that was ongoing, and you started mitigation earlier, you could have saved lives.” The observation tallies with discussions held by medical officers the world over on the speed, and forcefulness of suppression, mitigation and containment. COVID-19 has done its bit to baffle and alarm.

In baying – or tweeting – for Fauci’s blood the suggested replacement by the #FireFauci mob was one Dr Shiva Ayyadurai, a Massachusetts Senate candidate who comes across as a militant, zany version of that self-promoting wonder of mindfulness Deepak Chopra. Ayyadurai – not an actual medical doctor – is certainly not shy of controversy, being a votary of the vitamins-will-treat-and-prevent Coronavirus school of thought. On May 23, he penned an open letter to Trump with “a solution to restore the immune and economic health of the American people. This solution can be executed immediately in a low-risk and cost-effective matter.” This naturally entailed putting Fauci’s head on a pike. His “health” policy, sneers the doctor, “will result in the short- and long-term destruction of our citizen’s [sic] immune health as well as our nation’s economic health – a perhaps a conscious or intended goal.” Fauci is taken to task for being uninventive, a 1950’s relic of the “one-size-fits-all”, and “non-personalized approach to medicine and public health”. But what is unforgiving for the man his followers call Dr. Shiva is the “fake science” he peddles on the immune system.

Ayyadurai then settles into self-promotion mode. He was a pioneer of Biological engineering, “demanding a modern engineering systems approach to biology”. As a PhD from MIT’s Department of Biological Engineering in 2007, he invented CytoSolve, “a proven technology that enables the discovery of new medicines, combination therapies, functional foods and supplements – faster, cheaper, and safer, by using the computer to model complex molecular mechanisms and diseases.”

He concludes, from his own understanding of modern science, that it is “the over reaction of our OWN weakened and dysfunctional immune system attacking tissues and cells of our own body that harms and kills, versus the virus – be it COVID-19 or any other virus.”

On April 3, the Shiva4Senate website commenced a petition for the indictment and firing of Fauci, claiming “significant and deep conflicts with Big Pharma that has a singular aim: Force medical mandates eg. Vaccines upon all Americans.” Ayyadurai thereby becomes the anti-Big Pharma advocate, the noble knight battling the corporate and bureaucratic dragon of the medical establishment. Half-plausible critiques – the staining and at times lethal corruption of corporatized health care – are meshed with an implausible goo of self-promoting treatments that look like Chopra solutions on steroids. In doing so, the obvious point – that vaccines do save lives – is stumped.

The latest rage against expertise seems to have failed to affect any genuine change. On Monday, deputy press secretary Hogan Gidley took a bucket or two to “media chatter” that Fauci would be taken off the coronavirus task force. Forget Fauci: it was China all along that was the issue. “The President’s tweet clearly exposed media attempts to maliciously push a falsehood about his China decision in an attempt to rewrite history.” This rewriting, suggested Gidley, involved obscuring the role played by the Democrats and the media in their obsession with impeachment proceedings, thereby ignoring the dangers of COVID-19. When Trump did “take bold decisive action to save American lives by cutting off travel from China and from Europe”, he was attacked.

In this big to do, Fauci insists that Trump, for the most part, has listened to the recommendations of the COVID-19 taskforce. A diplomatic, if optimistic assessment. He hopes that cooler heads will prevail. “The idea of just pitting one against the other is just not helpful.” As for Trump, his words on Monday were reassuringly dangerous. “I’m not firing him. I think he is a wonderful guy.” Fauci beware.