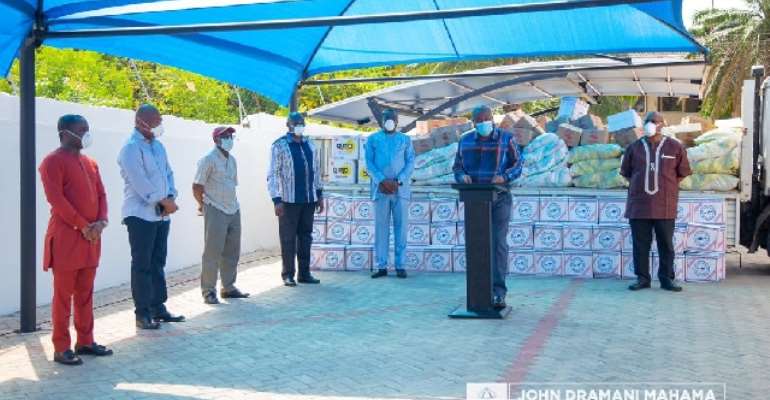 Former President John Mahama has said government agencies in charge of distributing food to the estimated 400,000 vulnerable people in Accra, Kumasi, Kasoa and Tema must stop asking the beneficiaries to show proof of their party affiliation before being served.

“There have been unfortunate reports of demands for party affiliation as an identifier for free food bought from the state’s resources”, the flag bearer of the National Democratic Congress said on Tuesday while presenting food items to some twenty thousand households, adding: “This must end now and immediately because Coronavirus does not know NPP and NDC. Neither does it know CPP, PNC, PPP or APC etc”.

Another member of the NDC, Dr Zanetor Agyeman-Rawlings, has also made a similar allegation which Information Minister Kojo Oppong Nkrumah and the mayor of Accra have, respectively, described as hearsay and falsehood.

In Mr Mahama’s view, however, “In order to ameliorate this challenge and ensure transparency, I reiterate my suggestion that government actively involves the Traditional Authorities, Assemblymen and women, CSOs and NGOs in addition to faith-based organisations to steer and ensure fair, equitable and non-partisan distribution of food and essential items to the vulnerable, including people with disability”.

These “critical stakeholders”, he said, “know their communities better and they know those who really need support. So, let’s involve them now!”

“Accordingly, I have, in view of the situation many of our people are facing, procured and will be making available, food items to cater for a total of 20,000 households across these areas affected by the lockdown, and these include the areas of Greater Accra, Kasoa and Greater Kumasi”.

Mr Mahama revealed that on Monday, “I received a mail from a young school teacher in Adenta who lamented that she is suffering and starving because school has closed down and her employers have still not paid them for the months of February and March. She is not alone in this situation. In many such cases, we have tried to lend support as far as our means would allow”.

Ladies and gentlemen, this is why I have welcomed the utilisation of part of the Stabilisation Fund to alleviate some of the unintended consequences of the lockdown occasioned by this pandemic. This includes the distribution of food to deprived communities within the affected areas”.

He said if organised efficiently, “this is a welcome lifeline to many deprived households that face the grim prospect of starvation as a result of the fall-out from the COVID-19 pandemic”.

“Unfortunately, reports from the field are a cause for worry, both in terms of the quality of the hot meals served and the mode of distribution of the food. The over-crowding and general scramble for food that characterizes this exercise defeats the protocol of social distancing and can accelerate the spread of the virus”, he noted.

“If trust is engendered in the people that the process of distribution will be fair and that the distributors will carry out their duties justly, and they are assured of their turn in a transparent way, people will be more measured and will not rush for the food in a manner of the ‘survival of the fittest’.

“We must also be mindful of what happens to people who live with disability in circumstances such as this. We must also prioritise in order that the food items reach all, especially children, pregnant women and nursing mothers”.