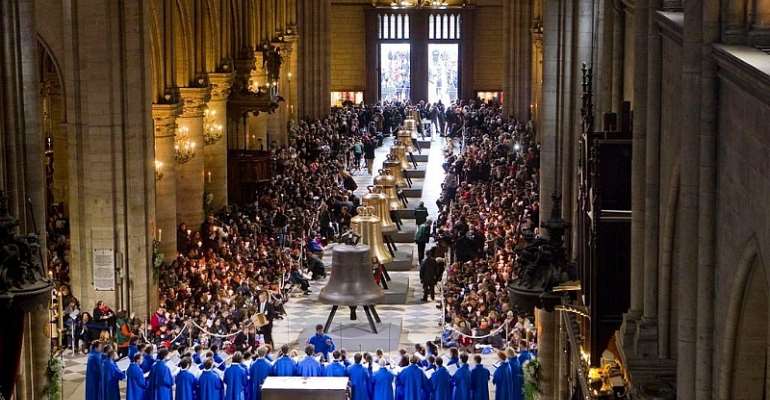 As France marks one year since the inferno that ravaged Notre-Dame de Paris, a team of specialists have used sound data gathered seven years ago to create a virtual reconstruction of a concert and recreate the momumental acoustics of the cathedral.

In April 2013, Brian Katz and his team at the Sorbonne University in Paris carried out acoustic measurements in Notre Dame Cathedral as part of a project to improve 3D-audio over headphones.

However, following the disastrous blaze on 15 April 2019, the measurements, revealing how sound propagated from different locations inside the cathedral due to its geometry and materials, became a precious record of a threatened cultural heritage.

Now, to commemorate the first anniversary of the Notre Dame fire, Katz and his team have used their measurements to create a virtual reconstruction of a concert in the cathedral.

The sound engineers ran the acoustic measurements and the recording of the original concert by the National Conservatory of Music on a computer model, effectively recreating the listening experience of the audience at the performance seven years ago.

“We wanted to offer people the concert experience, let them sit and listen to the performance as it was in 2013, and also highlight the difference of the acoustics at different positions in the cathedral,” Katz explains.

Listeners can choose to hear the virtual concert from any one of four different positions: rear, middle, front and the conductor's rostrum.

Besides offering unique access to the sounds of the past, these virtual acoustic reconstruction tools will also help in the restoration of the famous structure.

“We have proposed the use of these simulation models to see how changes in the cathedral will affect the way sound is propagated. For example, if the architects want to change the stone or alter the shape of the vault, we can adjust our computer model to show and even listen to how the acoustics will change,” Katz says.

France's coronavirus lockdown measures have made the researchers' endeavour more complicated. When the project started in early February, the team was aiming to produce extra elements, like dynamic 360-degree audio, and a wider range of listening positions.

However, the lockdown meant they couldn't access their powerful computers and mixing consoles.

“We had no other option but to work on our personal computers at home, which consumed a lot of time. For example, instead of using a large computer to mix sounds at once, our engineers had to remix four or five sections at a time and recombine them.

“It took me two days to run a computer simulation of the cathedral on my personal computer compared to the few hours it would have taken on the university machine,” Katz remarks.

Despite the technical limitations, the team were highly motivated to complete the project for the anniversary, and are glad to have finished it on time.

The project is an extension of the 2013-2017 Ghost Orchestra production, which led to a virtual reality 360° video with spatial audio and an orchestra fly-over, and a tour of the virtual cathedral.

Shatta Wale to spend another night in police cell; to face c...
32 minutes ago