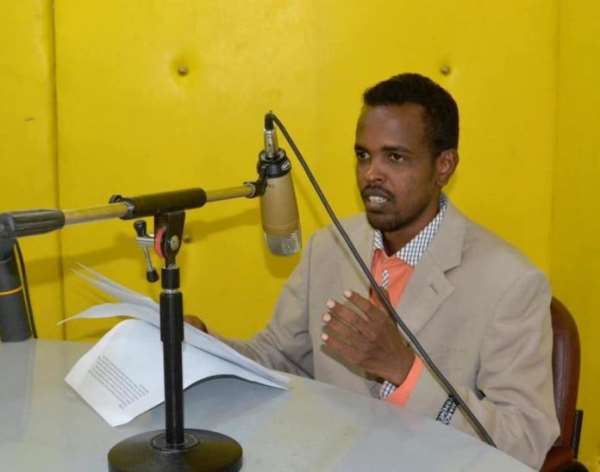 Somali Journalists Syndicate (SJS) expresses its extreme concern by the arrest of Goobjoog Media deputy director, Abdiaziz Ahmed Gurbiye by the Somali police in Mogadishu on Tuesday 14 April 2020 and calls for his immediate release.

According to Goobjoog Media director, Hassan Mohamed Mohamud, Police summoned and arrested Mr Gurbiye on Tuesday at 9.a.m at the Hodan Police Station.

Meanwhile SJS has reviewed a Banadir Regional Court letter dated 14 April and had the reference of arrest and charge order from the Attorney General’s Office, which had ordered the arrest of Mr Gurbiye under Article 220 of the Somali Penal Code which states “offending the honour or prestige of the head of the state”.

Mr Hassan Mohamed Mohamud, the Goobjoog director has told SJS that they were not informed about specific reason of their colleague’s arrest. However, a Facebook post on Monday 13 April, Mr. Gurbiye allegedly wrote that a donated ventilator machine “was taken by Somali President from De Martini hospital”, where government uses as quarantine facility for COVID-19 patients in Mogadishu.

SJS notes that the arrest of Goobjoog Media deputy director is not only a threat against constitutionally granted freedoms but will be a stumbling block in ensuring that citizens are informed of all important emerging issues including to the current emergency of Covid-19.

“We are concerned about the arrest of Goobjoog Media deputy director, Abdiaziz Ahmed Gurbiye amid the journalists are on the front-line on the fight against COVID-19,” Abdalle Ahmed Mumin, Secretary General of Somali Journalists Syndicate (SJS) said “We call for the Somali government for his unconditional release.”

SJS also calls Somali authorities to end the ongoing ban on Goobjoog Media Group from covering all sports facilities by the Ministry of Youth and Sports, which was enforced by the Somali Football Federation (SFF) on 9 April.