Struggle, fear and heartbreak for medical staff on virus frontline

By Gildas Le Roux with Joshua Melvin in Manila, Daniel Bosque in Barcelona, Femke Colborne in Berlin and Camille Malplat in Libreville 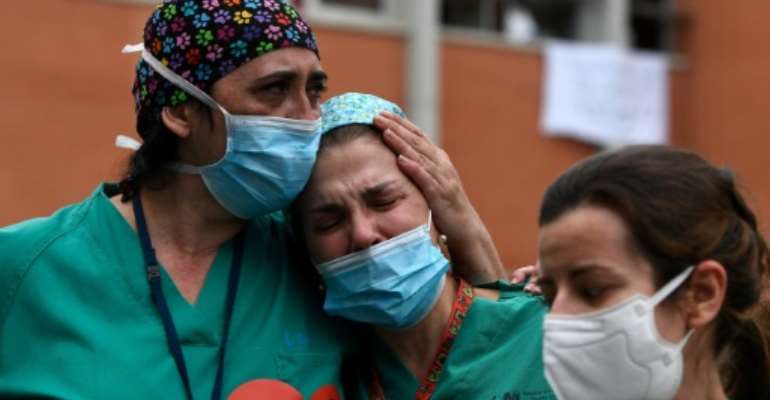 Healthcare workers have also faced the lose of colleagues to the virus they are battling. By PIERRE-PHILIPPE MARCOU (AFP)

Doctors, nurses and healthcare workers have become the unwitting heroes of the coronavirus pandemic, winning applause from balconies and streets around the world.

From Yaounde to Rome to New York, the pandemic has infected more than 1.9 million people and claimed 118,000 lives.

Hospital workers are dealing with a huge influx of patients, while also facing a lack of equipment in many cases and the fear of becoming infected themselves. Often, they face heartbreaking decisions while treating their patients.

AFP journalists spoke to healthcare workers around the world to find out what it's really like to be on the frontline in the coronavirus pandemic.

In Italy, one of the worst affected countries, dozens of doctors and nurses have died from COVID-19 and thousands of healthcare workers have become infected.

Silvana de Florio, nursing coordinator in the COVID-19 intensive care unit of the Tor Vergata Hospital in Rome, underlined the importance of being appropriately kitted out with masks, visors, gloves, scrubs and suits to avoid contagion.

Access to protective gear has been key for health workers on the frontline. By Piero CRUCIATTI (AFP)

"We don't set aside a specific amount of time for it, but we have estimated that for a seven-hour shift, about 40-50 minutes is spent just on getting dressed," she said.

"In terms of hand washing and hand decontamination, we are talking about 60-75 minutes per day," she said after scolding a care worker for not wearing a mask.

"Medical staff can't get sick -- not so much because of their ability to work, but because it would not be fair."

ECUADOR: the morgues are full

In the Pacific port city of Guayaquil in Ecuador, a sick nurse makes no attempt to hide her anger: 80 of her colleagues have been infected and five have already died.

Ecuador is one of the worst affected countries in South America, with hundreds of dead bodies lying inside homes because the morgues are full.

Lockdowns and other restrictions to stop the spread are in place in many countries. By MIKE STONE (GETTY IMAGES NORTH AMERICA/AFP)

"We went to war without any weapons," said the 55-year-old nurse, who spoke on condition of anonymity.

"The necessary equipment was not ready when this (the pandemic) was already happening, devastating Europe," said the nurse, who is resting at home as there is no space in the hospitals.

Patients with "severe symptoms" were arriving at her emergency department, "but due to a lack of tests, they were treated as if they had the flu and sent home."

"We had no personal protective equipment (PPE) but we could not refuse to treat the patients," she said.

In the United States, Judy Sheridan-Gonzalez, president of the New York State Nurses Association, also complained about the lack of protective gear for medical workers.

"We don't have the arms and the armour to protect ourselves against the enemy," she said at a recent protest outside a hospital.

Benny Mathew, a 43-year-old nurse in New York, said he caught the virus after caring for at least four patients without adequate medical dress.

Not long afterwards, when his fever had subsided, the hospital asked him to come back to work.

With a limited number of intensive care rooms and ventilators, some doctors and nurses face terrible decisions on patients. By Hector RETAMAL (AFP)

"They told me if you don't have fever you can come on work -- that was their only criteria," he said.

"I was told to wear a mask and come to work. We don't have enough staff so I think it was my duty to come back.

"But I was worried that I was going to transmit the disease to my coworkers, to the patients who don't already have it," he added.

With more than 195,000 confirmed cases of COVID-19 and around 10,000 deaths, New York state is the epicentre of the pandemic in the US, the worst affected country so far.

The doctors at Manila's San Lazaro hospital, a specialist centre for infectious diseases, are used to battling humanity's nastiest contagions -- but they've never seen anything like COVID-19.

Suspected coronavirus cases have died at triage, terrified patients grow outraged when they can't get tested immediately and the doctors have to manage the anxiety they could be carriers too.

Nurses and doctors have been applauded across the globe as heroes. By Ina FASSBENDER (AFP)

"It's a living nightmare," said doctor Ferdinand de Guzman, who at 60 years old is himself in a high-risk group.

With a limited number of intensive care rooms and ventilators, the doctors are burdened with horrific judgements.

"We don't like to play God," de Guzman said. "Clinicians just have to make decisions."

Many are afraid to go home after work. "We are worried about our families," de Guzman said.

"We always reserve one or two beds for (hospital) employees. We never had this problem before, ever."

CAMEROON: 'We are afraid'

Roger Etoa, a doctor in Cameroon, one of the worst-affected countries in sub-Saharan Africa, admits that fear of catching the disease also affects healthcare workers.

"I live with my wife and children," the 36-year-old said. "When I arrive in the evening I rush to the shower, but it is difficult to stop the children from jumping on you."

For some the lack of protective equipment has left them exposed. By Roni Lehti (Lehtikuva/AFP)

Etoa is the director of a healthcare centre in Douala, the capital of Cameroon.

As a precaution, he's started taking chloroquine, a drug used to treat malaria.

"We don't yet know if it works preventively or even curatively, but I prefer (to take it) just in case," he said.

Early studies have shown that chloroquine, may be effective in the treatment and prevention of COVID-19, though more evidence is needed.

"We are afraid, like the rest of the population. Afraid that our masks or suits are not fitted properly when we are dealing with a patient who is showing symptoms," the doctor said.

"We're obviously afraid of catching it. When you get up in the morning and you have a bit of a headache, you ask yourself, 'What if this is it? What if it's our turn to get the virus?'"

Antonio Alvarez, a nurse in the intensive care unit at Vall d'Hebron, the biggest hospital in Barcelona, described the heartbreaking daily task of phoning a family member to say goodbye to their loved ones -- from behind the protective glass.

"It's difficult to see patients who are alone and have no family with them," the 33-year-old said.

"They're saying goodbye from the door and it's probably the last time they'll see them" since funeral ceremonies have been banned, he said.

"If it was a member of my family, I wouldn't be able to stand just sitting there and seeing them behind the door," Alvarez said.

"It's a very difficult situation."

"Everyone is working like crazy, as though it was a war," said Nuri Aydin, director of the Cerrahpasa Faculty of Medicine at Istanbul University.

Some describe their emergency health work as akin to a battlefield. By MIGUEL MEDINA (AFP)

"The atmosphere here is not like a normal workplace, but a battlefield," he said during a visit to the hospital.

Istanbul, a metropolis with some 15 million residents and Turkey's economic capital, has around 60 percent of confirmed COVID-19 cases in the country.

Many healthcare workers are sleeping in hotels or converted student dormitories, afraid of infecting their families.

"What they are doing is superhuman. There's no price for the work of healthcare workers, they're in the service of humanity," Aydin said.

Thomas Kirschning is a senior doctor and intensive care coordinator in the German city of Mannheim, near the border with France.

The city recently sent home two French patients from Colmar, aged 64 and 68, after nursing them back to health.

"It was very motivating for the team that we were able to help," he said.

"We still had capacity in Mannheim, and it went without saying... that we would take care of these patients while there was an urgent situation in France."

Kirschning feels a little nervous when returning home to his wife and two daughters.

"I'm doing everything I can to make sure nothing happens when I come home," he said.

"We might not get as close as we normally would if it wasn't for this pandemic. We are all a little bit worried -- my family are worried for me, but of course I am also worried for my family."