Starvation, Military Brutality And Ignorance Might Kill More Africans Than The Novel Coronavirus 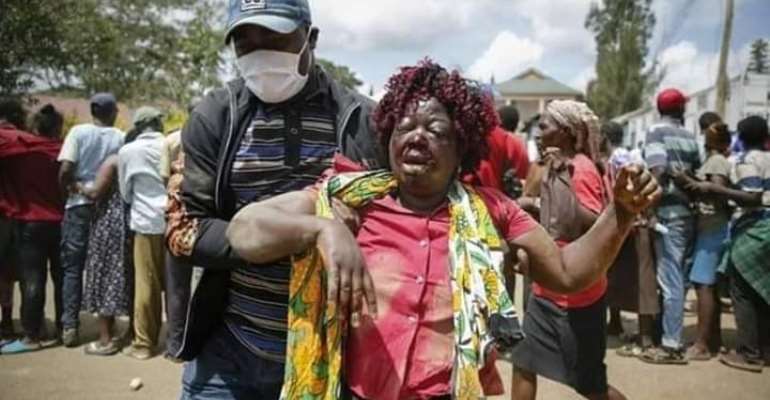 A lady was brutalized while fighting for mask and maize distributed by a local politician in Kenya's largest slum, Kibera.Photo courtesy: Fetus Chuma

At the onset of Coronavirus in Wuhan China, to its rapid spread to Asia, Europe and America, many Africans around the world opined that Africans were immune to Covid-19. Some attributed this assertion to the fact that, black people have melanin in their body unlike other races. Conversely, these statements are not merely speculations, but medically inaccurate. In the past weeks, more and more African countries have confirmed numerous cases, deaths and recoveries like their counterparts in Europe, America and Asia. Now, Africa accounts for more than 12,300 plus cases, 632 deaths and 1,632 recoveries according to the latest data by the John Hopkins University and Africa Center for disease control. More numbers of African countries have started imposing range of preventive and confinement measures in order to combat the spread of this global pandemic. Besides, good numbers of African countries have announced “State of emergency” that prevents activities that may possibly gather large numbers of persons. On the other hand, the nature of many of these countries fight against the virus is not focused on conducting scientific research, but rather instant preventions through public health regulations. One will be correct to say that Africa has not thought of mobilizing her scientific class in the fight against COVID-19.

With the previously mentioned COVID-19 statistics of the COVID-19 pandemic in Africa and other parts of the world in mind, I am not opposed to instituting State of Emergency; however, I am more indignant at the implications and natures of State of Emergency across Africa and, If care is not taken, starvation, Military Brutality and Ignorance might kill more African than the novel Coronavirus (COVID-19).

In sub-Saharan Africa alone, more Africans survive on subsistence farming and many more acquire their daily bread from petit commercial activities. Suffice this to mean that an average African family farm to eat for the day. Therefore, to keep having bread on their tables, this process must be a routine. Considering the feminine crises that preexisted in many African countries prior to the COVID-19 pandemic, Africans fate can better be described as “fueling the existing fire”, for them, a lockdown that will prevent them for digging out their daily bread is like adding the last nail to the coffin. In the simplest terms, many will starve indoor, and if they will have to choose between Survival and prevention, the former will surface over the latter. The best African Government could do for their citizenry, especially the most vulnerable, was to design a sustainable feeding program that caters for their daily needs before imposing a lockdown. On the contrary, what we see today is an exploitation of the situation by African politicians. Incumbents and aspirants have tried to spin this to their advantage. They drive into slum communities tossing bread to residents in large numbers, in fact, according to a journalist in Kenya, “Chaos erupted among residents of Kibera , the largest slum area in Kenya as residents fought to share packets of maize flour(cornmeal) and a few masks donated by a local politician” Festus Chuma said. As the Coronavirus continues to wreak havoc across the globe, let us not forget very soon that starvation has been an age-old problem in Africa. A survey published by the Guardian in 2019 estimated that nearly 60 million children in Africa are deprived of food. The paper further elaborated that one in every three African children are stunted and hunger accounts for almost all child death across the continent. Overall, it is visible to the blind and audible to the deaf that starvation is a force to reckon with during these confinements across the continent, and the least attempt to downplay this problem has the potential to complicate the fight against this global pandemic.

Aside from starvation and ignorance as aforementioned, the involvement of the military and other paramilitary forces to enforce State of Emergency might be another catastrophe in many African countries, but most especially countries just returning from civil war and those enduring military dictatorships that came to power through military coup d’état. In such arrangements, soldiers live with the illusion that the military is governing, and therefore service is to the dictator and not the people. This is evident by their actions toward civilians, such as, beating, tortures and other draconian treatments. While other countries’ militaries are coordinating research and assisting in the fight against the virus, African Militaries take pleasure in making those they called “bloody civilians” blead. In such a situation, we lose sight of the main enemy (COVID-19) that is invisible, and our effort to prevent public movement becomes a boxing match, or better, an opportunity to settle scores with civilians. African military must be cautious while enforcing State Emergency during this global pandemic; they must understand that this situation differs from insurrection, or a warlike imposed curfew. As such, the approach of handling those who might be caught in violation must be quite different; people could be charged, asked to pay a fine or warned to leave the street on their first offence. The military, as a trained force could also deploy more reasonable enforcement strategy other than one that will inflict severe casualties like it has been in the past few weeks.

In addition, as we shall see, more people will resist the military when they have to make a choice of survival from starvation. In fact, this is not so strange to most African nations that endured long civil wars, during which time they interfaced soldiers and rebels in search of food.

Day three (3) of the lockdown in Liberia, West Africa

Overall, any State of Emergency other than one in which the vulnerable can afford their daily needs would be, if not impossible, but very difficult to enforce.

To avoid this catastrophe, African Governments must compliment State of emergency with a well-designed program that caters for the vulnerable and keep people in their homes alive. When this is done, I believe that it will ease the job of Health practitioners in tracing infected persons, and in a larger sense, Africa will defeat Covid-19 against all predictions.

John Saylay Singbae, II is a Liberian who studies International Public Law at the Cadi Ayyad University, Marrakech, Morocco. He can be reached via email: [email protected] and WhatsApp’s: +212679379451