With dire recession in view, world on edge over virus lockdowns

By Susan STUMME, with AFP bureaus 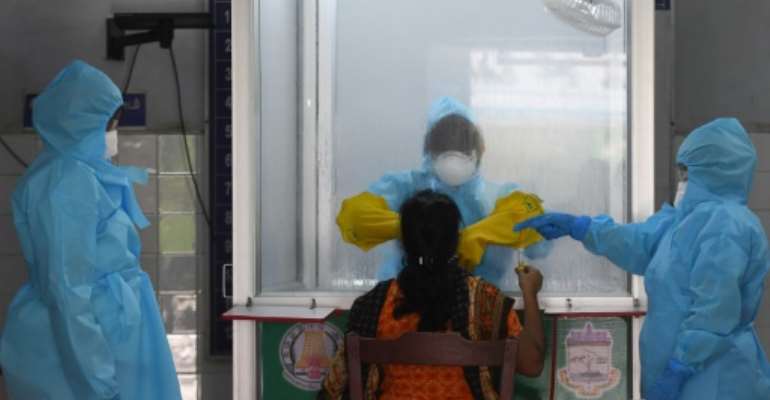 Medical technicians collect a sample from a woman at a COVID-19 testing center in Chennai, India -- where a nationwide lockdown has been extended to curb the spread of the novel coronavirus. By Arun SANKAR (AFP)

The world's governments on Tuesday grappled with how and when to lift sweeping coronavirus lockdowns that have saved lives but crippled their economies, as experts warned of a dire once-in-a-century global recession.

The deadly pandemic has already killed more than 120,000 people and infected close to two million worldwide since it first emerged in China late last year.

It has upended lives from New York to New Delhi as nations imposed extreme measures to contain the virus's devastating march, leaving billions largely confined to their homes -- but millions jobless and the global economy in a tailspin.

As the tally of deaths and new infections appears to begin to level off, world leaders and citizens are fiercely debating when to pull the plug on stay-at-home orders.

US President Donald Trump sparked controversy by implying he could force state governors and city mayors to send people back to work at his command.

The White House was expected to unveil a team Tuesday tasked with reopening the economy, as local leaders on both coasts banded together to say they would make their own decisions.

Some shops in Austria and Italy reopened Tuesday, one day after Spain allowed construction and factory workers to return to their jobs.

France has extended its nationwide coronavirus lockdown through mid-May 2020 -- here, a cat crosses the empty amphitheater in Arles. By Anne-Christine POUJOULAT (AFP)

But France extended its nationwide lockdown for another month, and India extended confinement orders for its 1.3 billion people until at least May 3.

"From the economic angle, we have paid a big price," Indian Prime Minister Narendra Modi said.

"But the lives of the people of India are far more valuable."

IMF growth forecasts by region and for selected countries in 2020. By Gal ROMA (AFP)

Dire economic warnings poured in on Tuesday, with the International Monetary Fund predicting the worst global downturn in a century.

The Washington-based IMF said the global economy is expected to shrink by three percent this year and the US economy, the world's biggest, is expected to contract by 5.9 percent.

"Much worse growth outcomes are possible and maybe even likely," according to the IMF, which said "The Great Lockdown" could bring the worst downturn since the Great Depression of the 1930s.

IMF chief economist Gita Gopinath said in 2020 and 2021, global GDP could slip by three percent or about $9 trillion -- "greater than the economies of Japan and Germany combined."

But if the virus is contained and economies can begin operating again, 2021 should see a rebound of 5.8 percent, the Fund added.

Individual governments also issued gut-wrenching forecasts -- France said its economy would shrink by a worse-than-expected eight percent in 2020, and Britain predicted a 13 percent drop in GDP.

The bad news was not contained to economic figures -- in France, organizers said the Cannes film festival would not go ahead in its usual format, and the Tour de France cycling race was also at risk.

'Hope it's not too early'

A woman wearing a face mask pushes a shopping cart with flowers in front of a DIY store in Vienna as Austria eased its lockdown measures. By HELMUT FOHRINGER (APA/AFP)

But some countries showed signs of setting off on the long road back to normalcy.

Vienna's popular Favoriten shopping district drew mask-clad shoppers after the government allowed some small stores as well as hardware and gardening shops to reopen across Austria, which has been spared the worst of the virus.

"I just hope by God that it's not too early" to ease the lockdown, 75-year-old pensioner Anita Kakac told AFP.

In Italy, children's clothing shops and bookstores opened their doors Tuesday, but some fearful owners kept their boutiques shuttered.

"Open in a desert? Why? A bookstore is a place where people interact -- opening a business where no one walks by is dangerous from every point of view," said Cristina Di Caio, a bookshop owner in Milan.

Some shops reopened in Italy like this one in Rome, but not all business owners were on board, worrying about the health consequences. By Tiziana FABI (AFP)

Italy's death toll is now above 20,000 -- the second worst after the US, though far higher per capita -- but deaths and infections have eased off.

Denmark planned to open some of its schools on Wednesday after a month-long shutdown, and the Czech government said it would begin easing lockdown measures on April 20.

World Health Organization chief Tedros Adhanom Ghebreyesus has warned that control measures "must be lifted slowly," noting that the coronavirus was 10 times deadlier than the 2009-10 swine flu outbreak.

'We are changing the curve'

US President Donald Trump -- seen here at a meeting with patients who have recovered from the novel coronavirus -- is at odds with state governors about how to reopen the world biggest's economy. By MANDEL NGAN (AFP)

In the United States, the death toll in hard-hit New York state, where the virus has killed more than 10,000 people -- almost half of the US total -- climbed again Tuesday with 778 new fatalities.

But new hospital admissions and infections were down, and Governor Andrew Cuomo offered a glimmer of hope.

"We are changing the curve, every day. We've shown that we control the virus -- the virus doesn't control us," Cuomo said.

On the issue of who decides when to lift the lockdown, Cuomo made his feeling clear: "We don't have a king in this country."

In Brooklyn, customers practice social distancing as they wait to enter a supermarket. By Daniel SLIM (AFP)

Trump quickly fired back on Twitter claiming that Cuomo "seems to want Independence! That won't happen!"

In California, Governor Gavin Newsom said: "I don't want to make a political decision that puts people's lives at risk and puts the economy at even more risk."

In France, another 762 deaths were reported Tuesday, one day after President Emmanuel Macron said the epidemic was "beginning to steady" -- but extended the country's lockdown all the same.

And in Britain, where Prime Minister Boris Johnson is still recovering from the virus, officials said lockdown measures would not be lifted anytime soon, with the outbreak's peak yet to come.