What the Heck is Going on in China – Treating Black People Like a Piece of Shit? 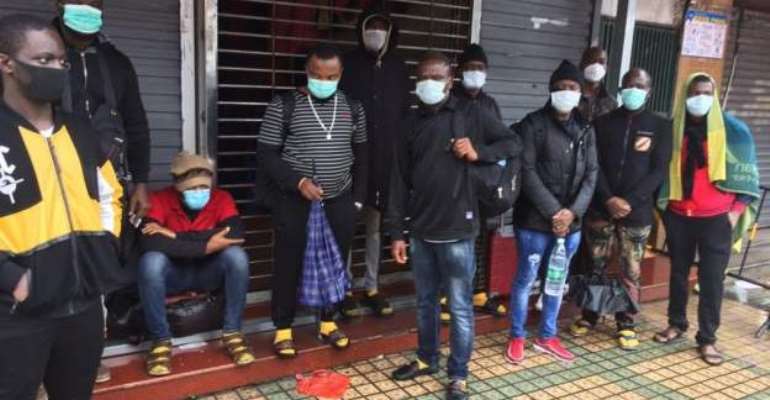 As bad, scary and deadly as the novel coronavirus (COVID-19) has turned out to be, sending everyone panicking for their sheer life, it has one major advantage of causing awakening in the until now black people, especially Africans, who have been lazily sleeping, without seeking to get off their arse to do anything for themselves as rational human beings. We are found of looking up to our white contemporaries for help towards the achieving of our basic needs all of the time hence giving them the lopsided advantage and power to do to us as they want when they want.

Although as evil as some blacks may find the western world contemporaries, either true or false and perhaps imaginatively, they are saints compared to the squinted-eye Far East Chinese. The Chinese see and treat the black African worse than the dirt on their shoes. They don’t hide away their inhumane disgust of the black man, yet our corrupt, irresponsible and myopic African leaders are forever pushing us into their hands to empower them to do whatever they see fit to us.

Currently, the news, proven beyond any shred of doubt, has gone viral globally, about how wickedly, indiscriminatingly and disgustingly the Chinese are maltreating black Africans in some provinces in China. Their unfeeling maltreatment of Africans as is ongoing in China has the undertone of the Chinese official sanction. They are chasing Africans out of their rented accommodations, hotel rooms etc., and into the streets without the slightest pity on even the pregnant women among them.

I don’t blame them but the obvious stupidity of the African leaders and Africans themselves. Can’t we read the minds of these Chinese who forever are pursuing an agenda of homogeneity without any adulteration of their kind through intermarriage with black people, in China? How many times have they not killed or assaulted black men going out with their Chinese women in China for this silly notion of theirs?

Nonetheless, for them to cleverly but gradually conquer and possess Africa, their men in Africa go in for black women, give birth with them, all to enable them achieve their objective of conquering Africa but subtly?

As naive as the Africans are, we allow ourselves to be manipulated by sorry to say, some of our most stupid, short-sighted and corrupt politicians and leaders to see the Chinese as saints to be allowed to do whatever they like in our African Africans even to the point of enslaving us in our own land.

Did former President John Dramani Mahama not allow the Chinese to do illegal surface mining (galamsey) in the country to the point of spoiling almost all our water bodies, damaging our virgin forests and farmlands? When President Nana Akufo-Addo decided to stop the devastating illegal mining (galamsey) in orchestration by the Chinese, the NDC political party and some little-minds in the country turned it into politics to finally scupper the fight against the ravaging galamsey.

Don’t Ghanaians know the value of air, water and food as life without which humanity cannot sustain themselves on earth? Yet, by our lack of collective intelligence, we allow ourselves to be played by politics to allow foreigners, especially the Chinese, to come to Africa or Ghana to spoil these three essentials of life for us.

I am highly annoyed at the rather irresponsible denial of the Chinese’s blatant, callous maltreatment of Africans in China as has gone viral globally, by their Foreign Ministry spokesman as has appeared in the British METRO newspaper of Thursday, April 14, 2020 on page 4 under the heading “China cases on the rise again amid racism row”. This Chinese spokesperson, Zhao Lijian, says, “We do not have discrimination in China against African brothers. It is irresponsible and immoral for the US to sow discord. Its attempt to drive a wedge between China and Africa will never succeed”

Are the Chinese by their reaction as just quoted not underrating the intelligence of Africans? Is their official response not a double sleep in the face? Yes, by our cordial, kowtowing and subservience attitude towards them even in our own African land when they are acting contrary to our laws to our disadvantage, seeing us as subhuman, that is how they will respond to the world and especially, to America, their supposedly arch-rival.

In the face of credible evidence, they have the guts to declare differently, because black people are blind and can’t see, or they are so stupid as not to feel the negative reaction on them by the Chinese.

Watch the videos below, fellow Ghanaians and Africans, to see if the Chinese spokesperson is lying or not.

In all these, the Ghanaians noted by their former President John Dramani Mahama as people of short memory, we shall soon forget the molestation of our people to go back to pamper the Chinese to further allow them to maltreat us even in our own country Ghana. If it were not so, how dare Ghanaians to continue to support this greedy and “dead goat” person, John Dramani Mahama, to stage a comeback to the presidency to flock Ghana with stubborn Chinese like Aisha Huang to come and dominate us in our own land?

Cry, my beloved country and countrymen. We are digging our own graves to be buried in by the Chinese and the white supremacists, as naive as we are.

We have to rise up to the day and to the task to fight our corrupt leaders who have by their deplorable attitudes thrown us into the hands of these Chinese guys to do as they want, when they want, with Ghanaians and Africans.

I am raging with anger so I had better stop here before cardiac arrest becomes my portion, as fuming with anger as I am at the moment.