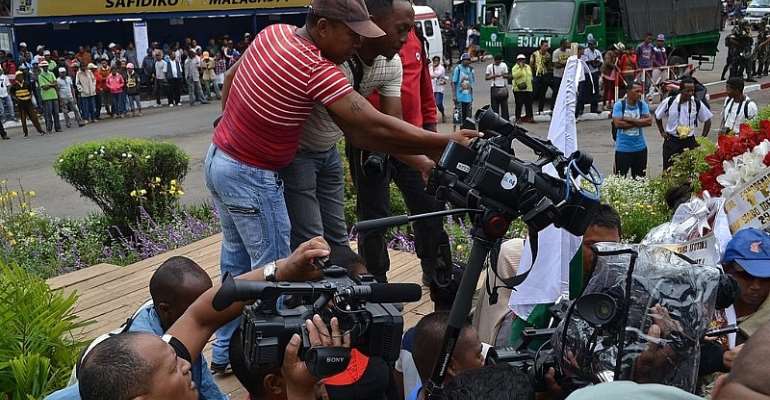 African journalists are increasingly harassed or threatened by security services while reporting the news during the Covid-19 period, according to a number of media watchdogs and journalist associations that have been tracking abuse of reporters.

According to Austria-based International Press Institute (IPI), which is tracking media freedom, 104 violations have been noted worldwide, including 22 on the African continent. Verbal and physical attacks, like the NTV journalist, make up the majority of violations.

Among the violations cited was an unnamed freelance journalist halted by police in Harare en route to report on the Covid-19 lockdown. “Reporter claims he was forced to lie down and beaten by officers who released him 15 minutes later,” according to the IPI report.

French-based watchdog group Reporters Without Borders (RSF) notes that “Zimbabwe is currently Africa's biggest press freedom violator in connection with Coronavirus crisis, with no fewer than five arrests of journalists” over the past two weeks.

“Arresting journalists does not stop the epidemic. These press freedom violations also run counter to government directives authorizing journalists to work during the lockdown and to use their 2019 press cards, of which the validity has been extended,” said Arnaud Froger, head of RSF's Africa desk.

Part of the issue in Zimbabwe, according to RSF, stems from police not giving journalists accurate information and clear instructions so they can go out and do their work.

Kenya police intimidation
“The government in Kenya has encumbered journalism, freedom of expression and the right to information,” says Demas Kiprono, a lawyer, columnist and Amnesty International legal expert.

Kenyan police use violence as a tactic to intimidate journalists from covering the news, Kiprono tells RFI, referencing a 27 March video of an NTV television journalist in Mombasa.

“It depicted a police officer assaulting an NTV journalist with impunity. Because of public outrage, the government said that it had interdicted the officer, although his name was never published,” says Kiprono.

Media watchdogs acknowledge that some restrictive measures are necessary to protect citizens and journalists during the Covid-19 pandemic, but the scale of these measures is disproportionate.

“Many governments seem to be using the Coronavirus outbreak as an opportunity to further entrench repressive measures, and far overreach the limits in place under international human rights laws on their powers during such times,” according to Article 19, a media watchdog.

The license was pulled “in the interest of public safety, security, peace, welfare or good order,” according to the IBA statement, but did not specify the reasoning. Prime TV, known for critical government coverage, had been recently covering the Covid-19 pandemic.

Arresting journalists
Arbitrary journalist arrests have risen across the continent, as governments use preventative Covid-19 measures as a reason to detain journalists. The Somali Journalists Syndicate (SJS) noted that journalists both in Mogadishu, the capital, and Hargeisa, the capital of self-proclaimed Somaliland, were intimidated, threatened and two were briefly detained while trying to cover Covid-19 stories.

However, SJS said that it welcomed the announcement of Somali Prime Minister Hassan Ali Khaire on Monday that journalists will be able to work and operate during the curfew imposed by the police chief General Abdi Hassan Mohamed, because media is considered an essential service.

Journalists in prison
Other reporter groups have called on governments to release journalists who have been detained or convicted and are currently in prison. Standard preventative measures put in place to prevent the spread of highly contagious Covid-19 include washing hands regularly and remaining two metres from others -- measures which are difficult in prisons where space is at a premium and good hygiene is not a given.

But on Monday, Cameroonian CNews TV channel cameraman Eric Kouatchou was released after being detained by authorities since 2 April. Kouatchou, who lives in Paris, returned to Douala and was in self-confinement as he had come from Europe.

He was accused by Cameroonian authorities of “contempt of the fatherland” for allegedly giving his press card to a Cameroonian activist in Paris last February. The government said this activist went to the French Agricultural Fair in Paris to call on France to do something about the killings taking place in Anglophone Cameroon.

“We are satisfied, and perhaps even relieved because we were worried about him,” Denis Nkwebo, the president of the Cameroon National Journalists Union (SNJ), told RFI.

The Committee to Protect Journalists (CPJ) has called on governments to free journalists already convicted on humanitarian grounds so they do not become ill from Covid-19.

In order to prevent the curtailing of freedom of the press, governments across the African continent must be more transparent—transparent about Covid-19 data, trends, and the roll out of government initiatives, according to Kenya lawyer Kiprono.

This “will create an environment where journalism is vibrant and pushes constructive narratives on the reality on the ground,” he said. An atmosphere of mistrust is created, which fuels the growth of misleading information in many quarters, he added.

“Good journalism is therefore drowned in a swamp of rumours, meaning that the public is not adequately and accurately informed on how best to protect themselves and others and what is being done by the government to save lives,” said Kiprono.