By Jenny Vaughan, with Heather Scott in Washington and AFP bureaus 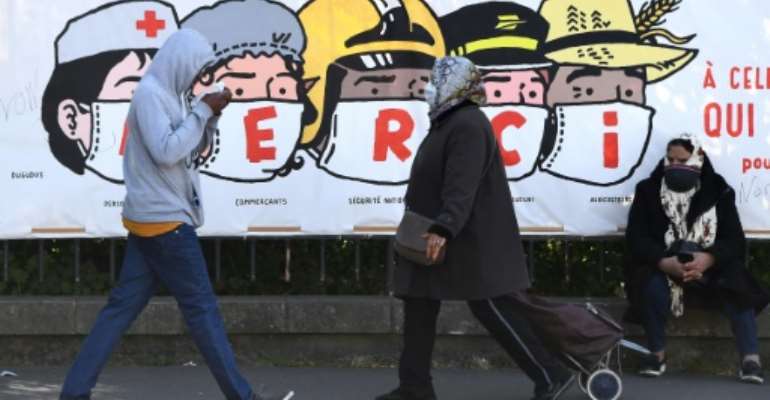 Debate is mounting about when -- and how -- to lift lockdown measures that have kept half of humanity hemmed into their homes for weeks on end. By FRANCK FIFE (AFP)

The coronavirus is poised to spark a bruising global recession not seen in a century, the IMF warned Tuesday, as countries considered lifting sweeping lockdowns that have crippled economies and kept billions confined to their homes.

The deadly pandemic has already killed more than 120,000 people and infected close to two million around the world since it first emerged in China late last year.

It has upended lives from New York to New Delhi to Naples as governments imposed unprecedented lockdown measures to contain the virus's devastating march across the globe, sparking fears of tipping the world economy into a slump not seen since the Great Depression.

But with deaths and infections possibly starting to plateau in some of the hardest-hit countries, debate is mounting about when -- and how -- to lift lockdown measures that have kept half of humanity hemmed into their homes for weeks on end.

Some shops in Austria reopened Tuesday, a day after Spain allowed construction and factory workers to return to their jobs.

India exteded national lockdown orders for its 1.3 billion people until the beginning of May. By Arun SANKAR (AFP)

In the US, President Donald Trump said numbers were levelling off as the governor of hardest-hit New York state looked ahead to a return to normalcy.

But the picture was patchy across the globe.

France extended its nationwide stay-at-home orders for another month, and while Italy said some bookshops and launderettes could reopen Tuesday, many stayed closed with stringent lockdown orders still in place.

France extended its nationwide lockdown orders for another month, and while Italy allowed some bookshops and launderettes to reopen Tuesday, many nevertheless stayed closed with stringent stay-at-home orders kept in place for most of the country's 60 million citizens.

Dire economic warnings poured in from the International Monetary Fund Tuesday, which predicted the worst global downturn in a century.

It forecast a three-percent cut world in output this year and a 7.5-percent dive for the eurozone economy.

The US economy, the world's biggest, is expected to contract by 5.9 percent.

"Much worse growth outcomes are possible and maybe even likely," according to the IMF's latest World Economic Outlook.

"If the pandemic and containment measures last longer, emerging and developing economies are even more severely hit," it warned, calling the global downturn "The Great Lockdown".

But if the virus is contained and economies can begin operating again, 2021 should see a rebound of 5.8 percent, it added.

France on Tuesday said its economy was expected to shrink by eight percent, worse than previous projections, while in Britain the Office for Budget Responsibility fiscal watchdog said GDP could plummet by 13 percent.

But some countries showed signs of setting off the long road back to normalcy.

Vienna's popular Favoriten district drew mask-clad shoppers after the government allowed some small shops as well as hardware and gardening stores to reopen across the country.

More than 120,000 people have died around the world from the virus which first emerged in Wuhan China late last year. By Hector RETAMAL (AFP)

Social distancing rules remained in place, however: queues were staggered and one tobacco shop only served customers on the street.

He was relieved to be able to get back to work after losing some 6,000 euros ($6,600) since closing his business last month.

"I had to fire my only employee," he said.

Austria has been spared the worst of the virus with some 14,000 cases and over 300 deaths.

Badly affected Spain on Monday allowed construction and factory employees back to work, and police handed out face masks in Madrid metro stations.

Italy's death toll is now above 20,000 -- second worst after the US -- but deaths and infections have eased off.

And Denmark planned to open some of its schools on Wednesday after a month-long shutdown.

In Washington, Trump said US numbers could be steadying as 1,509 new daily deaths were reported -- almost identical to the previous day.

A family applauds in front of the Mount Sinai Hospital in Queens next to a police car to show gratitude to medical staff and essential workers working on the front lines of the coronavirus pandemic on April 13, 2020 in New York City.New York's governor declared Monday that the "worst is over" for its coronavirus outbreak, despite deaths passing 10,000, as several states began devising a plan to reopen their shuttered economies.. By Johannes EISELE (AFP)

In New York, where the virus has killed more than 10,000 people -- almost half of the US total -- and seen unclaimed victims buried in unmarked mass graves, Governor Andrew Cuomo said the nightmare might be coming to an end.

"The worst is over if we continue to be smart going forward. I believe we can now start on the path to normalcy," Cuomo told reporters.

But he said restrictions would only be eased gradually. "It's not going to be, we flip the switch, and everybody comes out of their house, gets in their car, waves and hugs each other, and the economy will start."

In France, one of Europe's worst-hit countries, President Emmanuel Macron said in a televised address Monday night the epidemic there was "beginning to steady... (and) hope is returning".

But a strict lockdown in force since March 17 would continue until May 11 -- after which schools and businesses could gradually reopen at a "progressive" rate.

And in Britain, where Prime Minister Boris Johnson is recovering after a week in hospital with the virus, officials warned the peak was still to come and the lockdown there was likely to continue.

There were cautionary tales that the virus is not easily defeated.