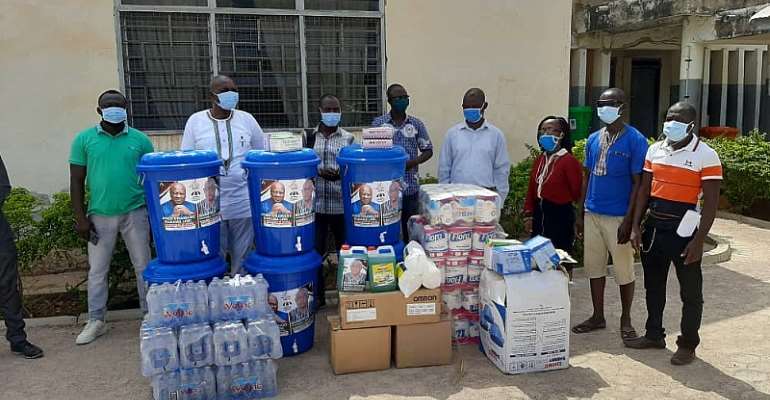 This is in a bid to curb the spread of the global dreaded Coronavirus.

Across the country, efforts are being made by individuals, organisations and the state at large to fight the outbreak.

The NDC and its Parliamentary candidate donated: 250 pieces of face mask, 10 packs of Voltic bottled water, 6 Veronica buckets,10 gallons of liquid soap, 1000 disposable gloves, 10 boxes of string and needles among others.

Party officials who donated the items on behalf of the Parliamentary candidate, urged health care providers to put up their best in these trying times.

Receiving the donation on behalf of the Hospital, Mr. Bentie Abubakari, Administrator of the hospital, thanked the National Democratic Congress and its Parliamentary candidate for the donation and assured that the items will be put to good use.

Currently, there are 566 cases of infections, 8 deaths, with 4 fully recovered.

There are also measures put in place to stop the spread of the condition. The government recently lockdown some cities, with a greater number of infections. Schools across the country have been closed down as well as borders.