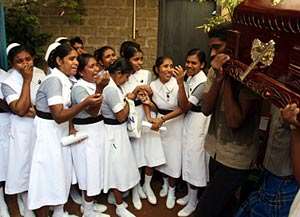 Fighting between the government and the rebel Tigers is intensifying. How did Sri Lanka come back to the brink?

The forensic pictures show a family lying together on a grass mat. Agnes Ketheeswaran, 23, is in a pink sarong and green skirt, her husband Palachamy, 25, is bare-chested, and their two sons—four years old and four months old—are naked between them. Under Palachamy's prone head is a shallow well of blood. On the shiny brown bellies of his two dead boys is blood from their mother, who has been shot in the face. The murders were part of a wave of executions on May 13 on the remote northern Sri Lankan island of Kayts. That evening, the gunmen killed nine others, including four of the Ketheeswarans' relatives. "I can't imagine what type of animals would do this," says Father Amal Raj from nearby St. Philip Neri's church, who helped move the bodies.

Just two days earlier, the Liberation Tigers of Tamil Eelam (L.T.T.E.), which is fighting for a separate Tamil state, had killed 17 Sri Lankan navymen in a suicide attack. So the murder of the Ketheeswarans, who were ethnic Tamils living near a naval base, was viewed by some as revenge by wayward sailors. Others saw it differently: some supporters of the Tigers blamed rival Tamils; an aide to President Mahinda Rajapakse spoke of unspecified forces "trying to discredit the President"; and Sinhalese nationalists even suggested the Tigers had killed their own to justify future attacks. To make sense of the latest fighting, here is a guide to an all but intractable conflict that sometimes seems to make no sense at all.

• HOW DID IT COME TO THIS?
War broke out in 1983 and had cost 64,000 lives by the time a cease-fire was signed in 2002. The government of Ranil Wickremesinghe promised peace, and the Tigers declared they wanted to join the political mainstream. But skirmishes continued after the cease-fire, and when Wickremesinghe lost power in April 2004 and was succeeded by a government allied to hard-line Sinhalese nationalists, the fighting intensified. The same year, the senior Tiger commander in the east, Karuna, broke away from the L.T.T.E., claiming its leaders were biased against eastern Tamils. The violence escalated in the east, and the L.T.T.E. accused the government of covertly backing Karuna. There was more anger after the December 2004 tsunami, which killed 36,000 Sri Lankans: Sinhalese hard-liners objected to giving the Tigers aid to distribute in areas they controlled, saying that would legitimize terrorism. Today both sides maintain they are abiding by the cease-fire and neither has launched an all-out offensive, for fear of being blamed for declaring hostilities. But with government air raids and artillery barrages, Tiger suicide bombs and mine attacks, and executions on both sides, neither is keeping the peace. "The truce is still in place in theory," says Peter Chalk, a senior analyst at security specialist Rand. "But for all intents and purposes, it's back to war."

• WHY FIGHT?
The island's two main ethnic groups are the majority Sinhalese (who number 14 million, are Buddhist, and live mainly in the south) and the Tamils (who number 2 million, are Hindu, and are concentrated in the north and east). The roots of discord go back to colonial times. The British favored the Tamils in the civil service in what Neil DeVotta, author of Blowback, a book about the origins of the conflict, says was "classic divide and rule." After independence in 1948, the Sinhalese took revenge. They made Sinhala the official language, discriminated against Tamils in areas like education and farming, and made Sinhala chauvinism a winning electoral strategy, most recently last November for President Rajapakse. Eventually, the L.T.T.E. took up the cause for the Tamils and began fighting for their own state in the northeast. Today the Tigers say they will accept a separate nation within a Sri Lankan federation. "The organization favors a form of regional autonomy and self-government," the L.T.T.E.'s chief negotiator, Anton Balasingham, told TIME by e-mail. Rajapakse says he will consider limited Tamil autonomy but rules out federalism, insisting the island remain a unitary state.

• HOW FORMIDABLE ARE THE TAMIL TIGERS?
Sri Lankan Presidents and Prime Ministers come and go, but L.T.T.E. leader Velupillai Prabhakaran has been around for 30 years. Born in a far-north village known as a smugglers' haven, he started young, allegedly killing the mayor of Jaffna, Sri Lanka's northernmost city, at the age of 20. Prabhakaran has displayed a genius for guerrilla warfare, forging the Tigers into what is widely acknowledged as the world's most ruthlessly effective rebel army. Extraordinarily disciplined, the Tigers make an art form of suicide attacks. They hide explosives around or even inside the body, and rig them to motorbikes, cars or boats. Prabhakaran's masterstroke, one that prefigured jihadi terrorism, was to instill an almost religious reverence for sacrifice and martyrdom in his army—all his fighters wear cyanide capsules around their necks. For the Tigers, many of whom are recruited as children, Prabhakaran is akin to a demi-god. Photographs of his chubby, affable-looking image hang on almost every wall in Tiger territory, and stories about the kindness and wisdom of The Leader abound. Not an articulate man, Prabhakaran, 51, uses secrecy to build his mystique, rarely making public appearances. Many analysts see him as the single biggest obstacle to peace. "He's a warrior," says Chalk. "The best hope for peace is if Prabhakaran dies."

• WHY SHOULD THE INTERNATIONAL COMMUNITY BE CONCERNED?
The L.T.T.E. extorts money from immigrant Tamils in Australia, Britain and Canada. It runs a fleet of smuggling ships that play a significant role in the illegal arms trade. And in a report last year, the International Institute for Strategic Studies in London said the L.T.T.E. had "possible" links with al-Qaeda. The Tigers deny any such connection, and no security agency has produced proof. Author DeVotta says the idea that the Tigers are "a threat to the world" is "nonsense," noting: "The Tigers' one goal is creating a separate state. They are a threat to Sri Lanka." But Teresita Schaffer, director of the South Asia program at the Center for Strategic and International Studies, explains that the high profile of terrorism, "which has been a hallmark of this conflict from the start," inevitably means the Tigers attract attention from the world's security services.

• ARE OTHER NATIONS HELPING?
Norway has acted as a mediator, but its efforts to start talks have failed. The U.S., Japan, the European Union and others have sent envoys, but threats to block aid to Colombo and to proscribe the Tigers as international terrorists have had little effect. There is little stomach for more aggressive stances, such as a peacekeeping operation. The last time that was tried—by India in 1987—the Tigers turned on the troops, pushed them out and, in 1991, killed the Indian Prime Minister at that time, Rajiv Gandhi, in a suicide attack.

• IS WAR INEVITABLE?
Both sides agree that war offers no solution to Sri Lanka's problems, but they increasingly see little alternative. Balasingham told TIME: "Sri Lanka will inevitably plunge into an ethnic war with disastrous consequences if the escalating violence is not contained and normalcy restored." Rajapakse told a Colombo newspaper last week: "If they insist on continuing their attacks, I will have to defend my country." Hawks are ascendant on both sides. DeVotta says elements in the government believe the split within the L.T.T.E. has weakened the rebels to a point where they can be beaten in war. Chalk and other observers predict a full-scale attack by the Tigers on Jaffna, accompanied by suicide bombs in Colombo. "If war breaks out it will spell doom to the entire country and create an unbridgeable ethnic chasm," says the L.T.T.E.'s Balasingham. That realization makes it no less likely to happen

Officer arrested for forcefully kissing the thighs of woman ...
37 minutes ago