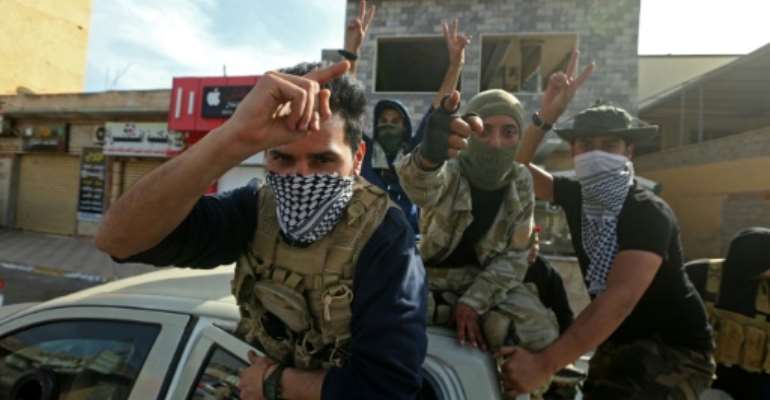 Fighters loyal to Libyan's UN-recognised Government of National Accord celebrate after the capture of the coastal city of Sabratha from forces of military strongman Khalifa Haftar. By Mahmud TURKIA (AFP)

The forces of Libyan military strongman Khalifa Haftar rained rockets on Tripoli on Tuesday after being ousted by government loyalists from a string of strategic towns west of the capital.

The capture Monday of the coastal towns of Sorman and Sabratha and smaller settlements further south was seen as a major blow to Haftar, who in April last year launched an offensive to seize Tripoli.

Sorman and Sabratha lie respectively 60 and 70 kilometres (40 and 45 miles) west of the Libyan capital, about half-way to the Tunisian border.

The oil-rich but poverty-stricken North African country has suffered almost a decade of conflict since longtime dictator Moamer Kadhafi was toppled and killed in a 2011 uprising backed by several Western powers.

The UN says hundreds have been killed and more than 200,000 displaced since Haftar launched his battle for Tripoli last year, which then quickly ground to a bloody stalemate.

Late Monday, salvo after salvo of rockets began raining down on Tripoli, the city where the UN-recognised Government of National Accord (GNA) is based, and loud explosions could still be heard Tuesday morning, AFP correspondents said.

Several homes were hit around Mitiga airbase in the eastern suburbs, the capital's sole and only intermittently functioning airport.

One person was wounded, rescuers said late Monday. Since then there have been no casualty updates.

The latest escalation comes as concern runs high over the spread of the coronavirus pandemic in Libya, where 25 cases and one death have been officially confirmed.

The UN has warned that health services in the country are already fragile and that many hospitals near fighting zones south of Tripoli have been damaged or closed.

Libya has suffered almost a decade of conflict since longtime dictator Moamer Kadhafi was toppled and killed in a 2011 uprising backed by several Western powers. By Mahmud TURKIA (AFP)

The GNA accused pro-Haftar forces of pounding Tripoli, saying they were taking revenge against the civilian population following Monday's losses.

"The criminal militia and mercenaries have taken out their anger on residential neighbourhoods of Tripoli to avenge their defeat, firing dozens of rockets and missiles on the capital indiscriminately," spokesman Mohamad Gnunu said.

The commander of pro-GNA forces, Oussama al-Jwili, late Monday said the operation to capture Sabratha and Sorman was launched after he received information that Haftar fighters were moving west.

The strongman's forces were planning to advance on the city of Zouara near the Tunisian frontier in an attempt to seize it and then push further towards the Ras Jedir border post.

GNA forces were now also surrounding the key Al-Watiya airbase southwest of Tripoli, a rear base for Haftar forces and launchpad for the aircraft they use to bombard the capital.

Fighting was also raging between the rival forces east of Tripoli, between the cities of Misrata and Sirte.

Fayez al-Sarraj, Prime Minister of Libya's UN-recognised Government of National Accord), holds a press conference in the capital Tripoli on Monday. By - (AFP)

Misrata is the hometown of many GNA loyalists while the strategic coastal city of Sirte was captured in early January by Haftar forces.

Fighting was also reported in the region of Abu Grein, southeast of Tripoli and halfway between Misrata and Sirte.

The seizure of Sorman and Sabratha was the GNA's most significant victory since June last year, when its forces retook the town of Gharyan, the main supply base for Haftar's forces southwest of the capital.

According to Harchaoui, the Turkish-backed GNA forces have in recent week been more "aggressive... on multiple fronts, often successfully".

"High-precision artillery on the ground, Turkish drones and better coordination" were proving a "formidable" combination against Haftar forces, he said.

Advanced drones supplied by the United Arab Emirates have given Haftar, who also relies on backing from Russia, an advantage in the skies.

Several UN-backed attempts to reach a ceasefire between Libya's two rival forces have failed, and the world body has slammed repeated violations of a 2011 weapons embargo.