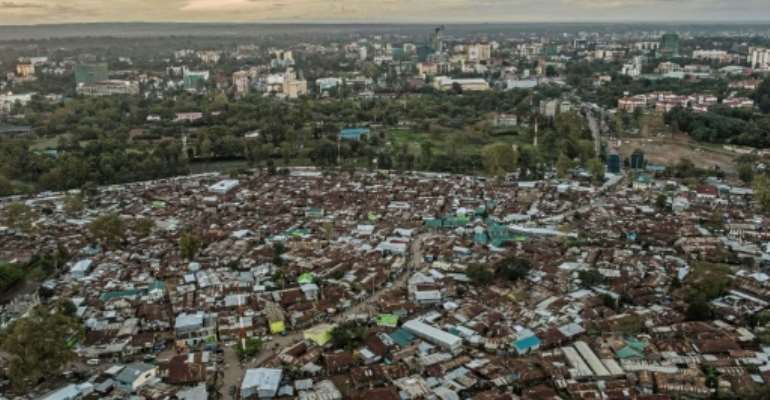 The Kibera slum in Nairobi. Coronavirus lockdowns will have a devastating impact on Africa's urban poor, say experts. By FREDRIK LERNERYD (AFP)

Women and children fell to the ground, bloodied and trampled in a desperate surge for food being handed out in a Nairobi slum, as police fired teargas and men with sticks beat the hungry.

As African countries grapple with the coronavirus pandemic, observers warn that the traumatic scenes which played out last Friday will not be the last if governments fail to help millions of urban poor who live hand-to-mouth.

"I give them (the government) one to two weeks before things get worse. Not in terms of coronavirus, but in terms of hunger," said Kennedy Odede, who runs Shining Hope For Communities (SHOFCO), a grassroots movement which works in the Nairobi slum Kibera and other informal settlements in Kenya.

Kenya has so far cordoned off the capital and parts of its coastline and imposed a night-time curfew and other social distancing measures.

Many these restrictions are having a wrenching impact on the poor, causing many to lose their jobs, said Odede.

While President Uhuru Kenyatta has wielded the threat of a full lockdown to get citizens to comply with the rules, officials admit it is an agonising choice, especially as 60 percent of Nairobi's residents live in slums.

"Locking up people in the slums will be the last option. A lot needs to be done before that," a high-ranking security official told AFP on condition of anonymity.

The coronavirus arrived late in Africa, but is slowly taking hold with over 15,000 cases and 800 deaths across the continent.

While much of the developed world waited weeks to begin taking action, countries in Africa rapidly shut borders and banned mass gatherings.

Empty: The bus station in the Rwandan capital Kigali after the government imposed a travel ban. By Simon Wohlfahrt (AFP)

Mauritius, Rwanda and Tunisia were the first to impose full lockdowns -- with Mauritius going so far as to shut supermarkets and bakeries for 10 days.

South Africa is the biggest economy on the continent to completely confine its citizens, while Nigeria imposed lockdowns on Lagos -- the continent's largest city -- and its capital Abuja, which on Monday were extended for another two weeks.

Both have millions of people packed tightly in urban slums.

"The inevitable reaction has been to follow what the rest of the world is doing," said Jakkie Cilliers at the Pretoria-based Institute for Security Studies (ISS), who has called for Africans to come up with a "unique solution" to stave off the virus.

"A lockdown is unenforceable and unsustainable across much of Africa. You are trying to do something that is not possible and you are condemning people to a choice between starving and getting sick.

"It's not possible for 10 people living in a tin shack... to not go outside for three weeks."

However most nations across the continent have stopped short of forcing all of their citizens to stay indoors.

Madagascar and Ghana have completely locked down selected regions and towns, while Senegal, Mauritania, Guinea, Mali, Ivory Coast, Burkina Faso and Niger have imposed states of emergency and night-time curfews.

A group of reclaimers -- people who pick up and sell recyclable rubbish -- cook food at the Bekezela slum in Johannesburg. Most people here are depending on food donations to survive during the country's lockdown. By Emmanuel Croset (AFP)

Like Kenya, Benin has cordoned off key cities -- preventing movement in and out -- while the capitals of Ivory Coast, Burkina Faso and Niger are also cut off.

Ethiopia, with a population of over 100 million, has closed borders and schools and discouraged large gatherings, but has yet to restrict citizens' movement.

"We can't impose a lockdown like more developed nations, as there are many citizens who don't have homes," said Prime Minister Abiy Ahmed.

"Even those who have homes have to make ends meet daily."

On the other end of the spectrum are Burundi and Tanzania, where life largely continues as normal and whose governments have so far downplayed the dangers of the epidemic.

"Coronavirus should not be a reason to destroy our economy at all," said Tanzanian President John Magufuli.

Experts agree that for the different levels of confinement to work in Africa, significant state support is needed -- a challenge in a continent where many countries are already heavily reliant on donor aid.

Kenya has lowered taxes and is delivering free water to slums, Senegal's government is paying electricity bills and Ugandan President Yoweri Museveni has urged landlords to let people live rent-free until the crisis is over.

In Lagos, Uganda, Rwanda, South Africa and elsewhere, governments are distributing food, however often only to a "fraction of the vulnerable", said Strohm.

She argued that many of the measures taken are "ineffective and unproductive" -- curfews on top of transport restrictions create greater crowds as citizens rush to get home in time, and thus enhance the risk of infection.

Strohm and Odede back the idea of direct money transfers to citizens -- especially to avoid the inequality and chaos of food distribution.

Foreign donors -- battling their own virus-induced economic crises -- will need to step in, they say.

Cilliers argued you need to try and "get the maximum economic activity going so people can survive, but try to keep opportunities for infection limited."

A policeman in the Ugandan capital Kampala beats an orange hawker for defying stay-at-home instructions. By Badru KATUMBA (AFP)

Another solution to avoid complete lockdowns and economic collapse is mass testing, with South Africa so far the only country seeking this approach.

But only around 70,000 tests have been conducted so far, a level that is still "way too low", Health Minister Zweli Mkhize has admitted.

The majority of countries are still only able to do limited testing.

Meanwhile, ever-stricter measures across the continent have led to a rise in police violence as authorities struggle to get desperate citizens to comply.

"I think we will continue to see excesses and relatively substantive brutality," said Cilliers.