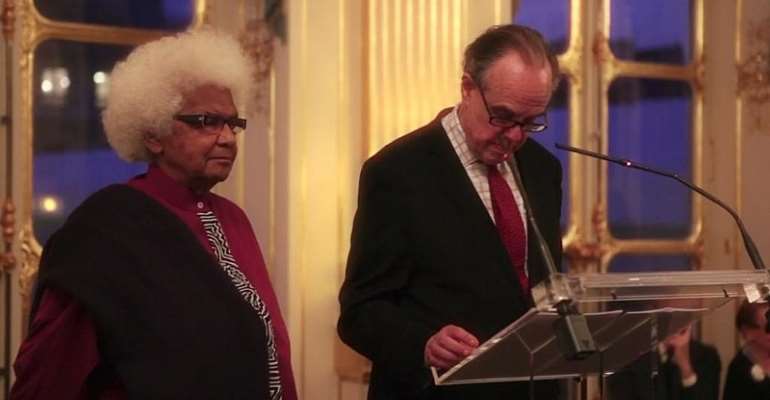 Sarah Maldoror, a pioneer of PanAfrican cinema and lifelong activist , died in Paris at the age of 91 on Monday, due to complications from coronavirus, according to her family.

Born Sarah Ducados, to a Guadeloupian father and a mother from the southwest of France (Gers), she chose her artist's name as homage to The Songs of Maldoror, the work of the surrealist poet Lautréamont.

Starting out in theatre, she founded Compagnie d'Art Dramatique des Griots in Paris in 1956, the first troupe composed of African and African-Caribbean actors, "to bring attention to black artists and writers."

She attended a drama school in Paris, then received a scholarship to study film with Mark Donskoi in Moscow in 1961-62.

She spent time with the pioneers of the African liberation movements, in Guinea, Algeria and Guinea Bissau, alongside her companion, Mario Pinto de Andrade, a poet and politician from Angola, who founded the Movement for the Liberation of Angola (MPLA) and became the liberated country's first president in 1960.

Her 1968 debut film Monagambée, which examines torture techniques used by the French in the Algerian war, was selected for the Quinzaine des réalisateurs/Directors' Fortnight at Cannes in 1971.

She liked to repeat: "For many African filmmakers, cinema is a revolutionary tool, a political education to raise consciousness.

Sarah Maldoror's best known work is the award-winning feature film Sambizanga (1972), with screenplay by Maurice Pons and Mario Pinto de Andrade, about the Angola liberation struggle, 1961-1974, as seen from a woman's perspective.

Documentaries about artists
Tributes have been emerging in praise of Maldoror's illustrious career in which she made some 40 films including a number of important documentaries which shone a light on black artists such as the poet Aimé Cesaire.

France's former culture minister, Frédéric Mitterrand referred to her considerable contribution not only to cinema, but to history.

He awarded her with the Chevalier dans l'Ordre National du Mérite - for services to culture in 2012.

"She had contributed to fill the deficit of images of African women in front of and behind the camera," he said.

In an interview with American media, Sarah Maldoror agreed with the need to put women in the spotlight.

"African women must be everywhere. They must be in the images, behind the camera, in the editing room and involved in every stage of the making of a film. They must be the ones to talk about their problems."