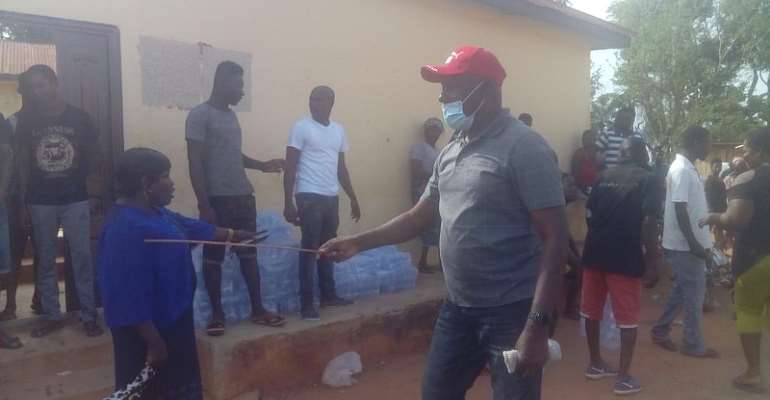 The District Chief Executive of the Atwima Kwanwoma District of the Ashanti Region, Nana Okyere-Tawiah Antwi, has flogged a section of the residents of Antwima Yabi indiscriminately.

The DCE physically assaulted the residents on Easter Friday, April 10, 2020, for disregarding the social distancing protocols issued by the government to contain the spread of Covid-19 pandemic.

The victims numbering about 40 had assembled in front of the chief's palace to receive some food items from the chief of the community, Kontomere Kwame Frimpong Ababio, to address their plight during the government-backed lockdown period.

But the DCE who did not take delight in the way the people had closely gathered lashed them after they refused to adhere to his earlier warning to distance themselves.

Stunned by the seeming weird action of the DCE, most of the victims began to leave the scene for their homes to avoid more troubles.

But Nana Okyere -Tawiah Antwi explained to those who stood behind the dangers of the coronavirus pandemic and why they should avoid exposing themselves unnecessarily.

“The government is taking serious measures in fighting this pandemic and social distancing is part of the measures,” he told them, saying, “the recalcitrant people among us would never adhere to these simple orders from the President unless you lash them and I am ready to lash anyone in this district who flouts the directives” he said.

The District Chief Executive indicated to journalists, he had embarked on a campaign to whip recalcitrant residents who will disregard the lockdown measures by the government.

“I have been going round the communities to lash any group of persons that would be found gathered outside instead of the stay-at- home orders. I was at Bebu (my hometown) to discipline some people who were also gathered outside arguing,” he indicated.

He vowed to continue his campaign until the people in his jurisdiction adhered to every orders set out by the government.

One Gifty Ansah who was a victim expressed surprise over the actions of the DCE but was quick to add that it was in the right direction that they were beaten.

“He first warned us to disperse but because we were all eager to receive some of the food items from the chief's elders, we never bothered to listen to him.”

Showing a mark on her left arm, she said, “He is my DCE and I believe it was out of love that he disciplined us. From the way he talked to us after the act, I sensed he felt pity for us.”

Akwasi Asare, another victim added that, he had not met the DCE before and was surprised to get that lashes from him, quoting a Bible verse, “For the Lord disciplines the one he loves, and he chastises every son He receives,” as an inspiration.