The Recent Effusions Of Mr. Kweku Baako On The Bank Of Ghana Hospital Defies Common Logic 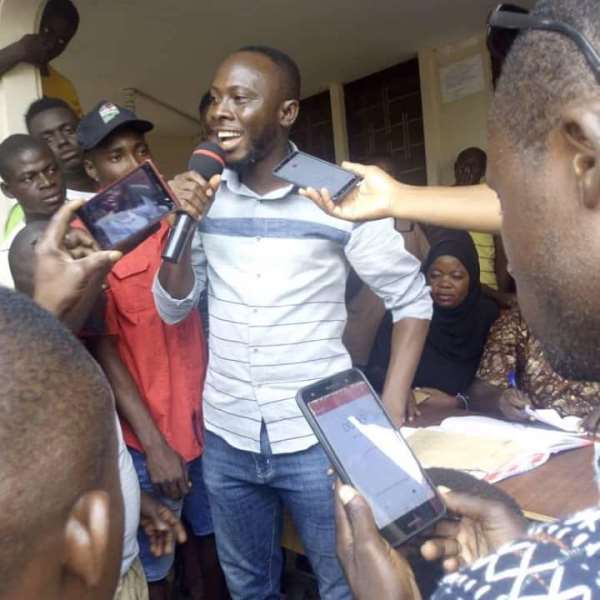 When the Ghana project was realized and the seamless journey started, many were those who saw a shining star in Africa. Ghana had just written its name in the books. Many selfless Ghanaians joined the early struggle and sacrificed their lot just to see the train moving in the right direction.

When the dark clouds finally settled on Ghana with the emergence of the forces against the Ghana project, the likes of Uncle Kweku Baako saw it all; from the trenches of uprisings to the darkness of civil protests and boycotts and to the unfairness of democracies, Mr Baako and his league of young men and women stayed as part of the struggle. So, if today, he makes references to history anytime he forcefully placed his arguments in context with its attendant body language, you just but have to appreciate him.

This is one of the reasons Mr. Baako mostly gets his way around and bully many of us as we try to join the national conversation. Sometimes he uses political history and other times unrelated equalization to downsize some arguments placed in the context of the law, economics, security and the likes.

When it suits him, he decides not to join in such debates with the excuse that he doesn’t have the technical locus to do so, but in times when the debate favored him and his political allies, he joined same with speed and used his pile of documents, body language, and history to want to stay put and displace his opponents.

With the Bank of Ghana (BoG) hospital project and related issues, Uncle Kweku Baako sought to situate his argument on two entry points;

1. that the BoG is an autonomous institution and thus take decisions on its own and

2. that at no point did the cabinet of HE John Mahama took such a decision or given any such directives to the BoG to undertake the hospital project.

To Mr. Baako, until Cabinet takes a decision and/or give directives to public institutions, all decisions of the boards of such institutions are privately owned and their dividends remain the shares of the individual board members and not even the institution which is state-owned. Where is the logic in this position?

Yes, per the BoG Act, 2002, (Act 612), the Bank of Ghana has a distinct functional autonomy. So that after appointing the Governor, two deputy governors, eight other directors, and the board, the President cannot direct the BoG as to how to apply its technical tools (monetary policy and others) in regulating the banking sub-sector and other related activities and agencies. This singular provision of functional autonomy does not make the Bank of Ghana a private institution whose operations are parallel to government policy.

Again, this does not give the BoG a blank cheque to apply state funds which the President has ultimate responsibility for the way they want. In fact, such funds are accounted for in the same manner any state institution will account for the application of any state funds.

Per Mr. Baako’s logic, the government as an institution is limited to the President and his appointees. More interesting is that, per his logic, government policy or decision is that which is taken in cabinet ONLY, at the ministries and which are solely taken by “politicians”. Why should the BoG’s assets remain that of the BoGs’ which the government can’t lay its hands on but its liabilities can and should be for the government to bear?

To the extent that when it’s policy implementations fail, the backstops with the President, his cabinet, the Economic Management Team and the entire government, the BoG’s decisions remain a part of government’s. Mr. Baako repeated after Dr. Bawumia when the latter kept referring to HE John Mahama as incompetent just because of the exchange rate depreciation. Is it not the case that the BoG regulates the exchange rates? Some double standards?

Section 28 of Part III of the BoG Act, 2002, (Act 612) states clearly that the Bank of Ghana is the Custodian of State Funds. In furtherance, the Bank shall be the sole custodian of the state funds both in and outside Ghana, and may by notice published in the Gazette authorize any other person or institution to act as custodian of any such funds as may be specified in the notice. Again, section 29 of the same Act specifies that the BoG is the sole Banker for Government. With this, The Bank shall;

1. Receive, collect, pay and remit money, bullion and securities on behalf of the Government.

(2) The Bank shall accept custody of all securities, documents and other valuable objects belonging to the Government.

(3) The Bank may act as banker to any government institution or agency.

With the instances stated above, the BoG is an integral part of the government, and any of its functions is public and their relative effect and burden are on the government of the day. With this case, where do we start to draw the thin line between government (public) ownership of the BoG and its independence/autonomy?

When Mr. Baako on his Wednesday mood, praises Dr. Bawumia on the Peace FM Kokokrokoo program for the stability of the Cedi or for the relative downward trend of general interest rates mostly as a result of the regulation of the policy rate by the BoG, where does that come from? Same Mr. Baako in his usual Thursday blue strips long sleeves on Metro TV Good Morning Ghana will blame HE John Mahama for decisions for the banking crisis which partly resulted from regulatory failures of the BoG.

What is different in this case? That Dr. Bawumia and the NPP can be and should be praised when the BoG with its functional autonomy takes policy decisions that yield positive outcomes, but Mahama should never be mentioned when the same BoG uses its reserved funds to build a public hospital which the government can decide to operationalize or not.

Why will decisions of a Board constituted by Mahama affect him when the outcomes are negative but the same Mahama doesn’t even know or takes credit or have an idea that the same bank is using “public funds” to build a hospital? I thought boards were put in place to make decisions for and on behalf of the appointing authority even if it were the case that such boards have independence and/or some form of functional autonomy.

Can Mr. Baako produce the cabinet Memo that authorized the establishment of Ever Pure Company or Kasapreko Distilleries which today are branded and bandit about as Nana Addo’s achievements? What is different? Doesn’t same Mr. Kweku Baako sit on Newsfile to praise Nana Addo for the 1D1F program and even make attempt to count the number of factories HE Nana Addo has built?

Is it not equally interesting that Mr. Baako today tries to delink Mahama from Mills? So he tries to share the deliverables (physical achievements) according to the years those decisions were taken in cabinet, but the same man cares less about when the actual executions were sanctioned. He did the same with the Euroget projects (9 hospitals) which will be my next episode with Mr. Baako in the coming days.

Mr. Baako, please stay with this principle so that you would be able to share using the same ratio, the alleged corruption scandals which were/are all heaped on the head of Mahama by your bosom friend, HE Nana Addo and his party which you support wholeheartedly. Did Mahama’s Cabinet sanction what now turnout to be the Woyomegate? Send your answer to HE Nana Addo and his NPP.

What is clear in all of these is that the BoG is a public institution that works for and on behalf of the government. All the functional leadership of the BoG is appointed by the President. Its board is constituted by the President and its policies are fused into the policy direction of the government of the day. Any funds available to the bank after payment into the consolidated fund as required by law still remain public funds. Whatever expenditure lines the board decides to use such funds for still remain public expenditure.

Who does Mr. Baako want us to think he is?...a political historian who uses history to set his victims up and get his way around issues; an investigative journalist who we are told by Kennedy Agyapong that he uses entrapment to cajole his victims; a newspaper editor whose headlines are mostly skewed to favor the NPP and Nana Addo; an independent-minded social commentator who swore on TV that he will never wish the NDC well, or the communication strategist for Nana Addo who has access to documents that the information minister doesn’t have?