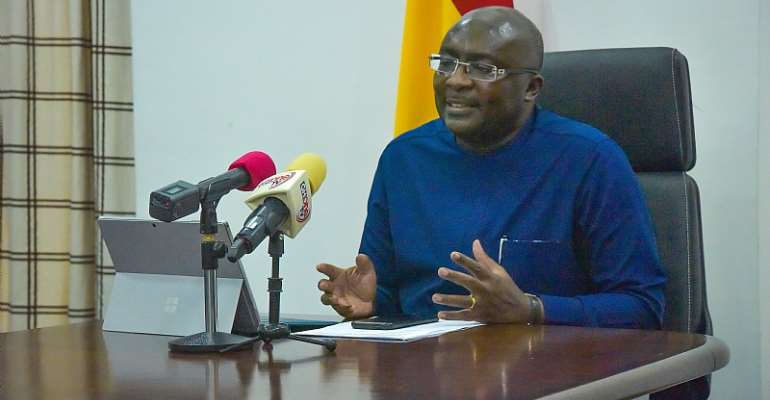 The Vice President of the Republic, Dr. Mahamudu Bawumia has indicated that Ghana’s aggressive contact tracing and testing procedures have been a major tool in the fight against the spread of the deadly pandemic since the country confirmed its first official case on March 11, 2020.

Speaking at the virtual launch of GH COVID-19 Tracker, an app for tracking COVID-19 cases, on Monday Dr. Bawumia said the number of tests Ghana has conducted, 37,954 as at 11th April, ranks the country among the top 20 nations in the world, and amongst the top in Africa, of countries who are testing for COVID-19 per capita.

“Our focus has been on tracing, testing, treatment, as well as observing social distancing. Ghana has adopted an aggressive testing strategy. In terms of testing for coronavirus per capita, Ghana is, on the basis of available data, in the top 20 of Countries in the world. In Africa for example, the available data indicates that we are number one in terms of testing per capita. Many countries are simply not testing. In Ghana, we have tested so far 37,954 people as on 11th April.

“For Africa as a whole, less than 100,000 people have been tested so far from the data available. In Ghana, we now have a total of 6 centers doing the testing (in Accra, Kumasi, and Pong-Tamale). Navrongo and Tamale Teaching Hospital will soon be added as testing centers.”

“What is significant about Ghana’s approach is that we are chasing the virus and trying to get ahead of it,” Vice President Bawumia explained. “We are not waiting for people to come to the hospital sick before we count them. If we had not done the aggressive contact tracing we are doing, we would not have found the 566 cases we have so far. This would have meant a much bigger problem for us later on as more and more people would have been infected.

“As I said, this is not being done in many countries so their reported numbers are no doubt an underestimate. In fact, if we had note done contact tracing, Ghana’s numbers for COVID-19 would be less than 200. That would have given us a false sense of security.”

The Vice President disclosed that 450 teams have been deployed across the country to identify all the people who have been in contact with Covid-positive persons in order to test them as well.

“In this regard, Ghana is doing what countries such as the US and UK and many other African countries are not doing. We are way ahead of them on this.”

Dr. Bawumia lauded the development and launch of the Covid 19 Tracker app, saying “As the President has said, our approach in combatting the COVID-19 is driven by science and data. In this regard, data is the most powerful weapon in our fight against COVID-19. You cannot fight what you cannot see. We cannot be groping in the dark. The data will point us in the right direction.”