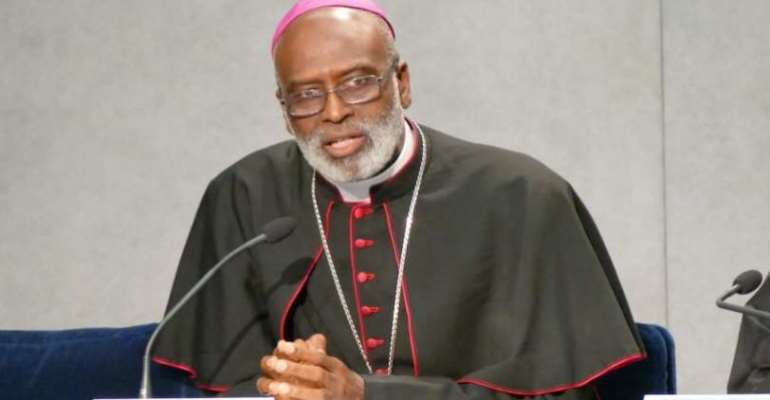 The Metropolitan Archbishop of Cape Coast, His Grace Archbishop Charles Gabriel Palmer-Buckle says the Coronavirus pandemic cannot be described as an act of God but rather a human action.

There is a rife religious debate about the role of God in the global Coronavirus pandemic that has seen more than 1.5 million affected across the world and over 90,000 dead as a result.

Some have suggested and strongly argued that the outbreak of the disease is God’s punishment on man for sin.

But Archbishop Palmer-Buckle said to the extent that Coronavirus has been in existence all this while but only grew to become a pandemic recently as a result of mass movements and other activities of man indicates that God cannot be blamed for it.

“I will like to believe that God is not responsible for these things. He created us in his own image and likeliness and he has endowed us with abilities to be able to handle what is happening and to do what we can intellectually, physically, materially even emotionally but he also does not want us to forget the spiritual dimension of everything,” he said in an interview on the Point of View on Citi TV.

“So, if you ask me if it is God’s doing, I will say…its spread worldwide is human. The virus has been there always but as to becoming an epidemic and a pandemic, it is because we human beings have helped in spreading it because of our travel here and there,” he added

The novel Coronavirus pandemic which was first detected in Wuhan, China in December 2019 has disrupted economies and affected millions of activities due to how highly contagious it is.

Like other countries across the world, schools have been forced to close down while physical religious and secular gatherings have been banned as part of efforts to stop the spread.

A major event on the Christian calendar, Easter has for the first time been marked without Christians congregating for services in Church as a result of the virus.

The Coronavirus pandemic has also brought economic hardship upon many people who have been forced to quit their work and stay at home to avoid getting infected.

Some have already, on the basis of the effect of COVID-19 attributed it to an act of God against man and a sign of the end of the world.

Charles Gabriel Palmer-Buckle said “whether it is apocalyptic or whatever it is, I am not worried. Jesus is with us,” he said.

While urging Christians to ensure a fair mix of spirituality by dedicating themselves to prayer, he said they should also adhere to the stated health protocols to avoid contracting COVID-19.

He added that Christians must come out as better people after the outbreak.