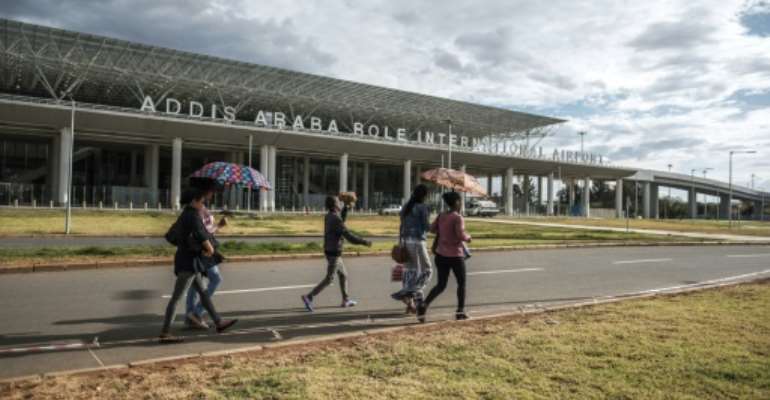 Bole International Airport in Addis Ababa, Ethiopia -- since mid-March, 2020, the UN's International Organization for Migration (IOM) has registered 2,870 Ethiopian returnees, all but 100 of whom were sent back from Saudi Arabia. By EDUARDO SOTERAS (AFP/File)

Saudi Arabia has deported nearly 3,000 Ethiopian migrants in recent days, despite concerns that such operations could hasten the spread of the coronavirus, the United Nations says.

Since mid-March, the UN's International Organization for Migration (IOM) has registered 2,870 Ethiopian returnees, all but 100 of whom were sent back from Saudi Arabia, IOM spokesman Alemayehu Seifeselassie said.

A humanitarian worker familiar with the deportations, speaking to AFP on condition of anonymity, said most of the returnees had arrived from Saudi Arabia in the past 10 days.

"Large-scale migratory movements which are not planned make the transmission of the virus much more likely to continue. We are therefore calling for the temporary suspension of large-scale deportations," Catherine Sozi, the UN's humanitarian coordinator for Ethiopia, said in a statement.

The migrants are kept in detention facilities in Saudi Arabia before being flown back to Ethiopia, and it is unclear how thoroughly Saudi authorities are screening them for the virus.

The Ethiopian government had requested that such deportations be halted until it could set up 30 quarantine centres in Addis Ababa, Sozi said in position paper seen Monday by AFP.

The Ethiopian Public Health Institute on Monday referred questions about the deportations to the country's foreign ministry, which did not respond to a request for comment.

Later on Monday night, Foreign Minister Gedu Andargachew took to Twitter to criticise not Saudi Arabia but rather the Ethiopian migrants and the traffickers who help them go abroad.

"Saudi Arabia and other countries are fed up both with our human traffickers and migrants. This shame has to stop through the joint effort of families and law enforcement personnel," Gedu said in his post.

Ethiopians have long looked to Saudi Arabia as an escape from poor economic prospects and state repression, hoping to find work despite not having legal status.

To get there, many board overcrowded boats that are at constant risk of sinking during sea crossings that can last up to 24 hours.

Up to half a million Ethiopians were in Saudi Arabia when officials there launched a crackdown on illegal migration in 2017, according to the IOM.

Since then, around 10,000 Ethiopians on average have been deported monthly, including in January and February.

The humanitarian worker said there was a two-week break in deportations beginning around the time Ethiopia announced its first COVID-19 case on March 13.

But flights have since resumed despite the fact that Ethiopia is straining to accommodate the returnees.

"The quarantine measures currently in place need to be improved, and the current medical staff needs to be increased and better prepared and equipped to assist... all newly arrived migrants," the aid worker said.

"These migrants are very vulnerable. They have undertaken an extremely dangerous journey and many arrive in Ethiopia with high medical and mental health needs."