By Peter Hutchison, with Hazel Ward in Madrid and AFP bureaus 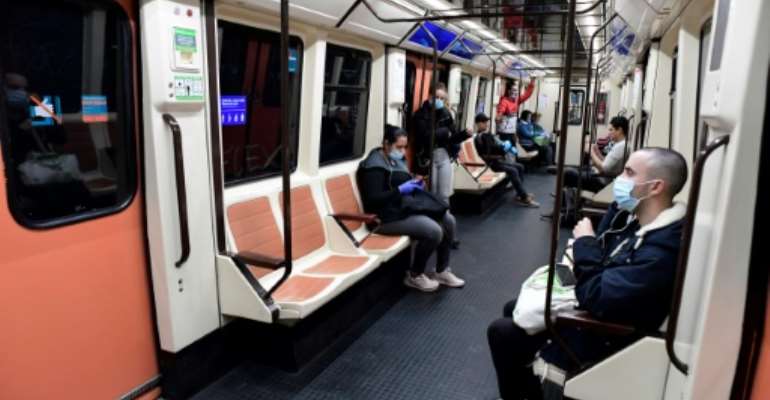 New York's coronavirus death toll hit the grim milestone of 10,000 on Monday but its governor said the pandemic passed its peak, as hard-hit European nations looked to ease the lockdowns that threatening to unleash a global recession.

Spain offered a shred of hope as it allowed some factory and construction workers to go back to work, with the number of people dying there from COVID-19 beginning to slow after weeks of tough restrictions.

Globe showing COVID-19 fatalities per country as of April 12. By Simon MALFATTO (AFP)

Italy and Britain also saw their death tolls fall, saying that the efforts of millions of their citizens to stay at home and ease the pressure on struggling health services could be finally flattening the curve of fatalities and infections.

But there were fresh warnings that lifting curbs too soon could unleash a second wave of coronavirus cases, with the World Health Organization saying that only a vaccine will fully stop the spread of the disease.

Since emerging in China late last year, the virus has killed more than 114,000 people worldwide, infected 1.8 million and forced more than half the planet's population to stay at home.

New York is America's coronavirus epicentre, with its death toll of 10,000 accounting for nearly half of the 22,000 across the entire United States -- itself the world's worst-hit country with a fifth of all deaths worldwide.

The impact in the state has been brutal, with unclaimed victims buried in unmarked mass graves and makeshift morgues set up for the dead.

New York deaths topped 10,000 on Monday but the governor said the peak had passed. By Johannes EISELE (AFP/File)

But New York Governor Andrew Cuomo declared the "worst is over" in the state, even as he announced the grim new figure, adding that he was working on a plan to gradually reopen the economy.

"I believe we can now start on the path to normalcy," Cuomo said.

US President Donald Trump has repeatedly said he wants to end the restrictions in place across much of the country as soon as possible in order to revive the hammered US economy.

He announced Monday top oil producers could cut production by 20 million barrels per day after nations reached a landmark deal to prop up prices hammered by the coronavirus crisis.

Cautious optimism that the lockdown measures are working is beginning to grow in some countries hardest-hit by the pandemic.

As it began to reopen its economy on Monday, Spain said its death toll had fallen again with 517 fatalities, plus the lowest daily figure of new confirmed infections since March 20.

Police in Madrid handed out face masks to commuters at a train station where life appeared to be creeping back to normal as workers in protective gear wiped down turnstiles.

"It's amazing that the government is doing this because either you can't find them in shops or they're very expensive," said nurse Brenda Palacios, who took two masks.

Italy will reopen some book shops and laundries on a trial basis on Tuesday, although it last week officially extended its national lockdown until May 3. By Vincenzo PINTO (AFP)

But Prime Minister Pedro Sanchez warned Sunday Spain was "far from victory", with the rest of the nation's 47 million people remaining under lockdown to avoid a relapse.

In Italy, the second worst-hit country after the United States, the death toll topped 20,000 on Monday but its number of critically ill patients dropped for the 10th successive day.

Italy will reopen some book shops and laundries on a trial basis on Tuesday, although it has officially extended its national lockdown until May 3.

German scientists meanwhile recommended a progressive lifting of restrictions later this week as new infections fall and the death toll remains far below its European neighbours.

But the World Health Organization warned that even the most careful easing of lockdowns was no substitute for a vaccine against coronavirus -- a process that could take at least a year to 18 months.

"Ultimately, the development and delivery of a safe and effective vaccine will be needed to fully interrupt transmission," WHO chief Tedros Adhanom Ghebreyesus told a virtual briefing from Geneva.

He added that coronavirus was 10 times deadlier than the 2009-10 swine flu outbreak.

China reported a spike in new infections, most of them imported cases. By NICOLAS ASFOURI (AFP)

Similar warnings will weigh heavily on decisions being made in other countries.

In France, President Emmanuel Macron is set to address the nation just after 8:00 pm (1800 GMT), and sources said he is likely to extend a lockdown in place since March 17 until well into May.

Macron will be looking to strike a balance between warning France -- where the death toll stands at 14,393 -- that an early relaxation of the lockdown could be disastrous, while reassuring people that the government has a plan to return the country to normal.

The British government is due to decide later this week whether to extend its lockdown -- but without Prime Minister Boris Johnson, who is recuperating at his countryside retreat after saying his battle with coronavirus "could have gone either way".

Britain recorded 717 deaths on Monday, a slight drop from the day before, taking the toll to over 11,000. Daily deaths tolls are often lower on Mondays as weekend fatalities have not been collected.

Moscow said it would tighten its lockdown restrictions, rolling out digital travel permits for some. By Yuri KADOBNOV (AFP)

Imported cases accounted for most of the total, officials said.

And in India, key industries warned of social unrest unless Prime Minister Narendra Modi makes concessions when he announces any extension Tuesday to a three-week lockdown of the country's 1.3 billion people.

It is not only humans under threat, with a major western Indian zoo bringing in social distancing for its big cats after a tiger in the United States caught the virus.

"We have decided to isolate them to avoid any kind of infection," superintendent Bharatsinh Vihol said at the Kamala Nehru Zoological Garden in Gujarat state.

Come carry Mahama’s E-block away if you won’t open it and gi...
52 minutes ago