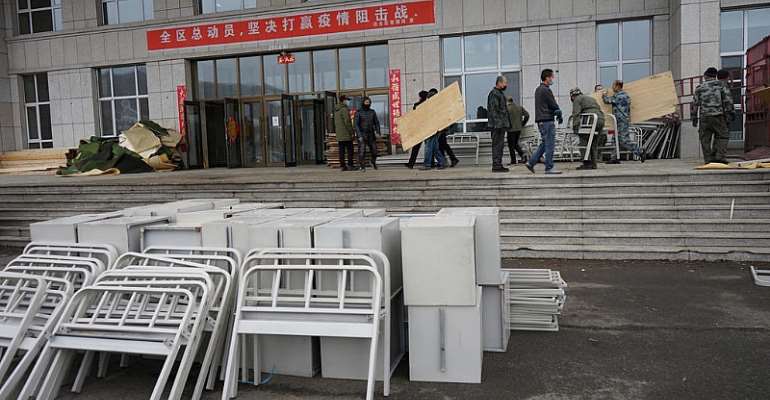 China reported 108 new cases of coronavirus on Monday – up from 99 a day earlier, a figure not seen since the beginning of March. The National health Commission said that half of those cases were Chinese nationals returning home from overseas, many of them via Russia.

The province most affected is Heilongjiang, in the north east on the border with Russia, where 49 Chinese nationals coming back to China from Russia tested positive for Covid-19.

The border has since been closed down to all movement in both directions, except to Chinese nationals wishing to return home.

There are an estimated 160,000 Chinese nationals who live and work in Russia, where the virus is gaining pace.

Second wave
As fears increase over a second wave of the virus, Chinese cities along the Russian frontier have been tightening border controls and imposing stricter quarantines.

To deal with the new infections, work is already under way to transform an office building into a makeshift hospital in the border town of Suifenhe.

Suifenhe and the provincial capital of Heilongjiang, Harbin, are now mandating 28 days of quarantine as well as nucleic acid and antibody tests for all arrivals from abroad.

Elsewhere in the country, some 60 passengers arriving on a flight to Shanghai from Moscow also tested positive for Covid-19 on 10 April.

Wuhan restrictions lifted
Meanwhile, a lifting of restrictions began in the Chinese city of Wuhan last Wednesday, the epicentre of the covid-19 outbreak.

After 76 days in strict confinement, road blocks were lifted on the toll ways at the entrance to the city, allowing 11 million residents to move with more freedom and access other parts of China.

The city recorded 2,500 deaths during the peak of the epidemic, but authorities say only one case of the virus has been reported since the beginning of April.

There is however, still a fear as to the risk of recontamination from so-called 'imported cases', that is with people arriving from outside the country.

Over 82000 cases
The total number of confirmed cases in mainland China now stands at 82,160.

Though the number of daily infections across China dropped sharply from the February 12 peak, when more than 15,000 cases were reported in a day, China has in recent weeks seen the daily toll creep higher after hitting a low point on 12 March.

The pandemic has now killed at least 114, 539 people around the world since it first appeared in China in December, according to a toll put together by AFP and other sources.

More than 1, 853,300 confirmed cases have been reported in 193 countries and territories since the outbreak began.

Tell your family and friends choking the payroll to forfeit ...
50 minutes ago