...As The Situation Cuts Residents From Farmlands
By Abraham Ananpansah 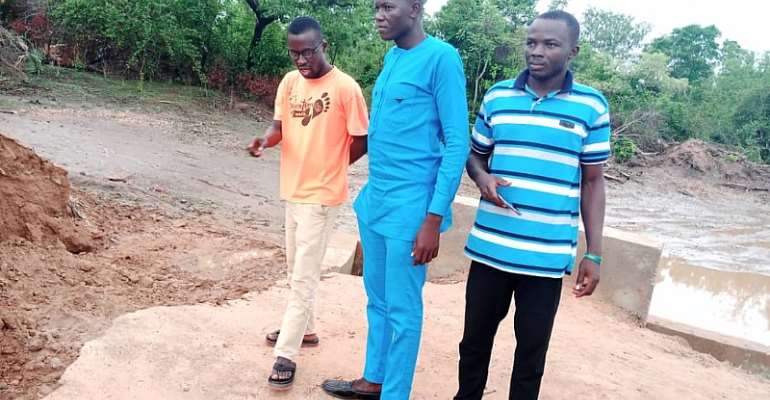 A bridge holding a dam constructed under the One Village One Dam project at Kpiri in the Canteen Electoral Area of the West Gonja Municipality in the Savannah region has broken down for the second time cutting off residents from accessing their farmlands and other sources of their livelihood.

Community members say the development has brought untold hardships on them and are calling for immediate resolution of the situation.

The Assembly Member for the area, Hon. Ananpansah B Abraham visited the site with community leaders and lamented over the extent of burden the collapsed bridge was putting on his people.

He told pdf online that motorists cannot longer plight the road and wondered how an ambulance can access the community should there be an emergency, especially in this COVID-19 times.

He narrated that this “is not the first time the bridge was collapsing and that it took his effort and voice to get the contractor back on the site when the bridge first caved in.”

He said proper maintenance was not done on the said bridge which is the reason for the recent development.

The situation he said, has been reported to the Municipal Chief Executive by his office who promised to further get the feeder roads to intervene.

The Chief of the Community, Naaba Atogzo Atuguba commended the Assembly Man for always responding promptly to the challenges of the community.

He recounted that the first time the bridge collapsed, it took the intervention of the assemblyman to get the contractor and authorities to act.

According to him, the patching up that was done didn’t solve the problem as the current situation is worst than the first.

He said though the assemblyman has already sent the report about the unfortunate development to the MCE, authorities have to respond urgently because they use that road to their farms, hospital and to other places of importance.