By Hazel Ward, with AFP bureaus 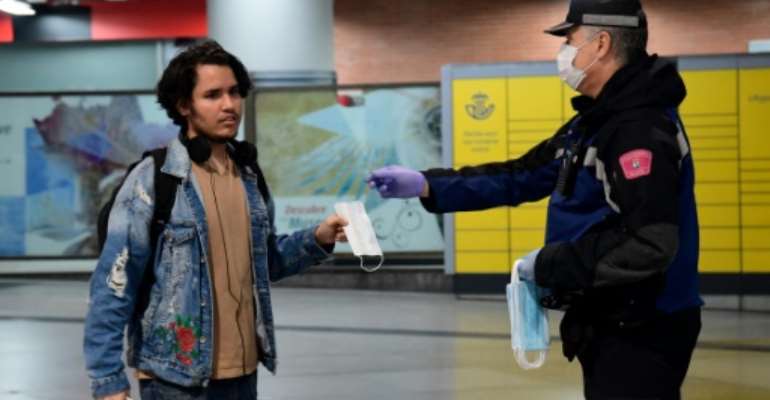 Spain reopened parts of its coronavirus-stricken economy on Monday as slowing death tolls in some of the worst-hit countries boosted hopes the outbreak may be peaking and lockdowns could soon be eased.

Watched by a world that wants to temper a brutal pandemic-induced recession, Spain allowed factory and construction staff to go back to work, while police handed out free masks on the metro.

But there were warnings that lifting curbs too soon could unleash a second wave of COVID-19, with China, where the virus emerged late last year, recording its highest number of cases in weeks -- most of them imported.

French President Emmanuel Macron was set to tell the nation that its lockdown would stay in place for several more weeks, while India braced for an extension of restrictions for its 1.3 billion people.

More than half of the planet's population is staying home as part of efforts to stem the spread of the virus, which has now killed at least 114,000 people and infected over 1.8 million, overwhelming healthcare systems and crippling the world economy.

Yet there is cautious optimism the curve may be starting to flatten. Spain's death toll fell again on Monday with 517 fatalities, plus the lowest daily figure of new confirmed infections since March 20.

China reported a surge in new coronavirus infections Monday, most of them imported from abroad. By STR (AFP)

Britain, France and the US also saw a drop in daily COVID-19 deaths, along with Italy which reported its lowest fatalities in three weeks.

US President Donald Trump said Monday top oil producers could cut production by 20 million barrels per day after nations reached a landmark deal to prop up prices hammered by the coronavirus crisis.

Police in Madrid handed out face masks to commuters at a train station where life appeared to be creeping back to normal, as workers in protective gear wiped down turnstiles.

"It's amazing that the government is doing this because either you can't find them in shops or they're very expensive," said nurse Brenda Palacios, who took two masks.

However Prime Minister Pedro Sanchez warned Sunday Spain was "far from victory", with the rest of the nation's 47 million people remaining under lockdown to avoid a relapse.

In the US -- now the world's worst-hit nation with a fifth of all deaths and more than half a million confirmed cases -- the government's top infectious disease expert added to hopes the virus may have peaked.

Easter celebrations around the world were muted with billions confined to their homes. By Kena Betancur (AFP)

In a sign of the continuing threat, a sailor who was on board the USS Theodore Roosevelt aircraft carrier died of coronavirus.

The ship's captain was sacked days ago after a letter raising the alarm over an outbreak on the ship was leaked.

Trump -- who on Sunday retweeted a call for Fauci to be fired, following reports of tensions between the two men -- had previously wanted the US to be back to normal by Easter.

As it was, many of the world's more than two billion Christians celebrated the Easter holiday from the confines of their homes.

The pope delivered his Easter addresses via video livestream, a first for the pontiff. By Handout (VATICAN MEDIA/AFP)

Pope Francis delivered a Easter Monday prayer expressing concern for the growing number of women subjected to domestic abuse while living under lockdown.

Governments in many countries continued to warn citizens to stay indoors during the holiday as they grapple with a virus that has even infected national leaders.

In Britain, Prime Minister Boris Johnson was resting at his official country residence Chequers a day after being discharged from a state-run hospital where he said staff had "saved my life, no question."

Britain recorded 717 deaths on Monday, a slight drop from the day before, taking the toll to over 11,000. Daily deaths tolls are often lower on Mondays as weekend fatalities have not been collected.

US President Donald Trump is eager to get the economy back on track. By JIM WATSON (AFP)

In France, Macron is set address the nation just after 8:00 pm (1800 GMT), and sources said he would announce the lockdown in place since March 17 must be extended beyond its current April 15 expiration date until well into May.

Macron will be looking to strike a careful balance between warning France -- where the death toll stands at 14,393 -- that an early relaxation of the lockdown could be disastrous, while reassuring people that the government has a plan to get the country back to normal.

German scientists meanwhile recommended a progressive lifting of restrictions later this week as new infections fall and the death toll remains far below its European neighbours.

The World Health Organization has warned countries not to lift lockdown measures prematurely, amid fears of a downturn not seen since the Great Depression.

Moscow said it would tighten its lockdown restrictions, rolling out digital travel permits for some. By Yuri KADOBNOV (AFP)

Imported cases accounted for most of the total, the National Health Commission said.

China only recently lifted the lockdown on the city of Wuhan where the virus first emerged in December.

The quarantine measures were later emulated by Italy in early March, followed by Spain, France and other nations around the world.

And in India, key industries warned of social unrest unless Prime Minister Narendra Modi makes concessions when he announces any extension Tuesday to a three-week lockdown.

It is not only humans under threat, with a major western Indian zoo bringing in social distancing for its big cats after a tiger in the United States caught the virus.

"We have decided to isolate them to avoid any kind of infection," superintendent Bharatsinh Vihol said of the lions, tigers and leopards at the Kamala Nehru Zoological Garden in Gujarat state.