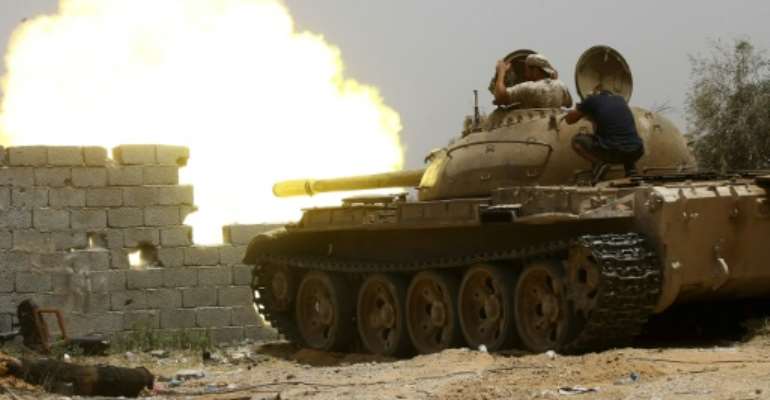 A file photo from June 2019 shows fighters loyal to the UN-recognised Government of National Accord (GNA) open tank fire south of the Libyan capital Tripoli during clashes with forces loyal to strongman Khalifa Haftar. By Mahmud TURKIA (AFP/File)

"Our forces took control of Sorman and Sabratha and are pursuing (Haftar's forces)," said a statement by Mohammed Gnunu, spokesman for the forces of the United Nations-recognised Government of National Accord.

Control of war-torn Libya is largely divided between pro-GNA forces and those of eastern-based Haftar, who launched an offensive to try to capture the capital on April 4 last year.

On their Facebook page, GNA forces published images of Grad rocket launchers, 10 tanks and armoured vehicles they said they had captured in the cities, which had been controlled by Salafist militias allied with Haftar.

Mohammad al-Gammoudi, a GNA commander on the ground, said Sorman and Sabratha had been seized after "six hours of fighting with air cover".

Libya has suffered almost a decade of conflict since longtime dictator Moamer Kadhafi was brought down and killed in a 2011 uprising backed by several Western powers.

Russia, Turkey, the United Arab Emirates and others have fuelled fighting in the oil-rich but impoverished North African country.

The UN says hundreds have been killed and over 200,000 displaced since Haftar launched his battle for Tripoli.

Several UN-backed attempts to reach a ceasefire have failed and the UN has slammed repeated violations of a 2011 weapons embargo.

On March 17, the world body and nine countries called on Libya's warring parties to cease hostilities to allow health authorities to fight against the new coronavirus.

The GNA and Haftar's forces welcomed calls for a humanitarian pause, but the GNA said it reserved "the right to respond to daily assaults targeting civilians and public facilities".

Repeated UN efforts to mediate a ceasefire have yielded few results and have been on hold since envoy Ghassan Salame quit in early March, citing health reasons.

Former Algerian foreign minister Ramtane Lamamra had appeared set to take up the post but the United States refused to endorse him, diplomats told AFP.

On Saturday the UN's humanitarian coordinator for the country said water had been cut off to millions of residents of Tripoli and surroundings in an "abhorrent" act of collective punishment.

The water supply was disrupted by members of an armed group in an area 350 kilometres (220 miles) southeast of Tripoli under control of pro-Haftar forces who are demanding the release of family members detained in Tripoli.